Taking the Wheel: A Visit With Rhonda Vincent 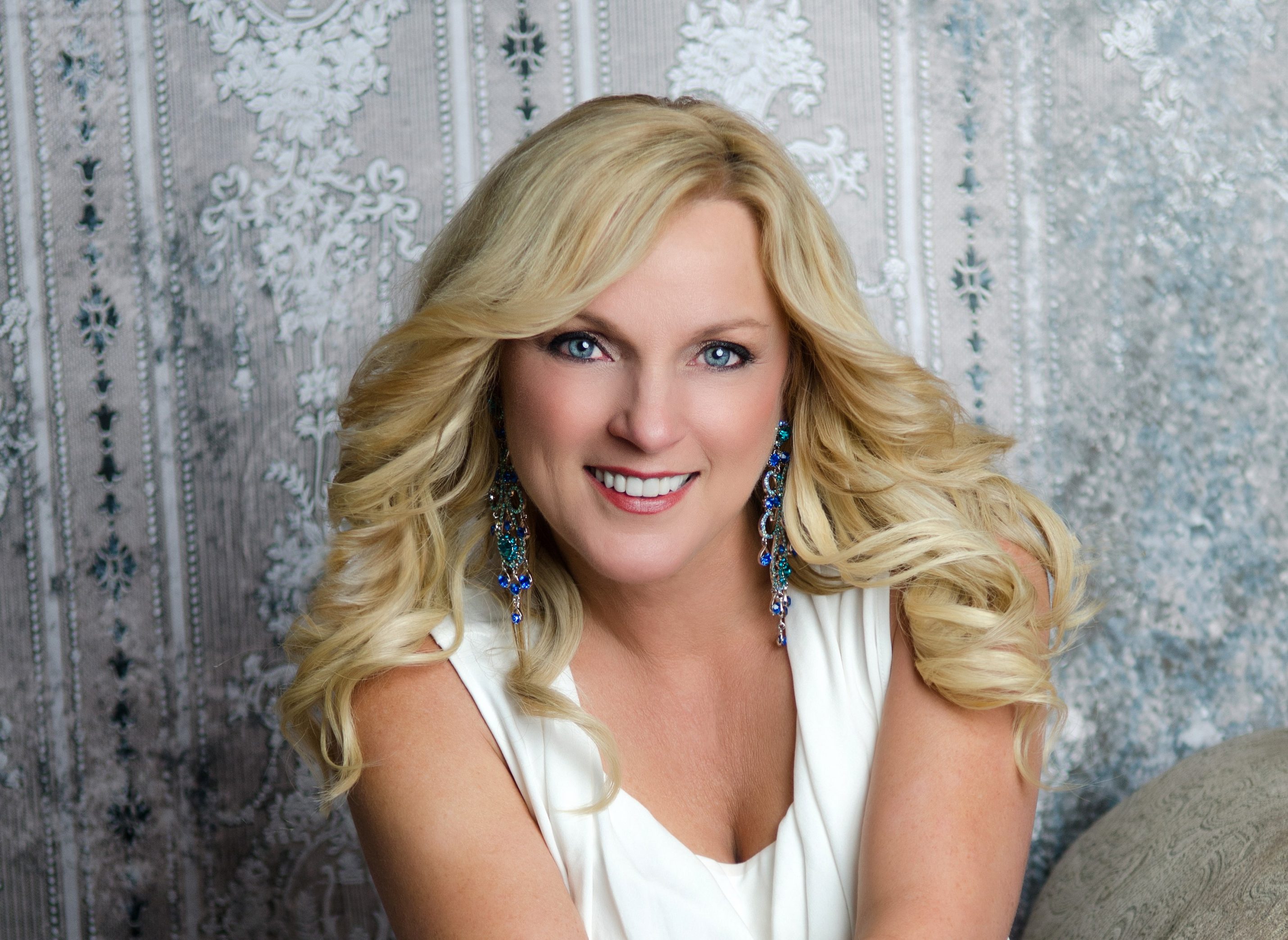 In no small part because of her bubbly personality, Rhonda Vincent has befriended some of the biggest names in bluegrass and country music. Dolly Parton asked her to sing harmony for an upcoming film soundtrack. Bernie Taupin gave her free reign to reimagine “Please” on an Elton John tribute album. Bluegrass heroes Bobby and Sonny Osborne set aside a 10-year break of performing together to appear on her newest album and DVD, Live at the Ryman. And she’s a frequent guest on the cable series Larry’s Country Diner, where she displays her talent for singing classic country among a roster of stars from the golden era.

Yet, beyond her upbeat demeanor, the real reason these legendary artists are reaching out is simple: Vincent is in top form with her musicianship and singing ability. In concert she glides to the high notes without straining, occasionally boosted by a little jump. She easily trades off between mandolin and fiddle, although she’s just as likely to let a band member from The Rage take the spotlight.

Off stage, Vincent maintains the tireless work ethic that’s carried her from being a child prodigy in Missouri to a Grammy-winning artist. (She picked up the 2017 Grammy for Best Bluegrass Album for a live album, All the Rage: Volume 1.) She leads her business with longtime husband, Herb Sandker, and keeps her hands on all facets of the industry – and now that means the steering wheel of the bus, too.

A few days after performing at her family’s Sally Mountain Bluegrass Festival in Queen City, Missouri, Vincent invited the Bluegrass Situation into her home studio in Nashville.

On stage, you appear to be so comfortable when you talk to the crowd. Why is that important for you to do?

But I found out the people were so special. The places may look the same, but the people are what can really make it special. And I like making it an experience. People are shocked because we meet and greet after every show, and they’re like “Oh my gosh, I actually get to talk to you?” Or they come and they can’t believe it and then they don’t say anything.

And then beyond that it’s not just a show, it’s not just a meet and greet, but now with Facebook and social media I get to stay in touch with them. Not that I can answer everyone, but I have set aside a little bit of time. Usually right before I go to sleep I have about 30 minutes and I try to answer messages or respond to people.

There’s a blind girl that lives in Portland, Oregon, and she sent me a message asking how to tune her mandolin. So I took my phone and made a YouTube video and [mock playing] ding, ding, ding, ding. I said “Cody, here’s E…” And I went through that and posted that and sent that to her. And from that, she flew all the way from Oregon to my family’s festival and she performed on stage with us at Sally Mountain last week. So it’s about relationships and loving these people because they love you so much and they love the music.

What is the audition process like to be in your band? How do you pick your musicians?

Mostly I guess I would see them. Like Hunter Berry, I saw him with Melvin Goins. What struck me about him, once again, he made himself accessible. He was backstage at the festival in Eminence, Missouri, and I would see him there every year, jamming for hours before they ever went on stage. Then he was with Doyle Lawson, the same thing. Then when I had an opening on fiddle, I called him up.

First of all their style has to fit the music and Hunter has that Benny Martin feel. He has that grit, and I loved that about his fiddle style. Mike Cleveland was in the band before Hunter, very similar styles, so the style had to fit. But just always being aware. I love to get out at SPBGMA or IBMA, wherever we are at festivals, and hear young talent because you just never know. …

It’s nice that you can be the one to make those decisions. You don’t have to say, “All right let me get back to my lawyer and my label.” This is kind of a family business for you.

It is, yeah. It’s what you see is what you get. The Live at the Ryman CDs came in recently. I went by myself and loaded up 6,000 CDs and loaded them in my car to bring them to the warehouse. The guy’s like, “Don’t you have somebody to do that?” And it’s like, “Yeah I do, but this is a good workout program.” And there’s a satisfaction going, “Wow! Look how nice I stacked those, and look how nice this is.” And you know what, I’m in charge of inventory.

Back to your question about musicians… it wasn’t always so easy to find musicians. When you’re starting out and you don’t have a lot of dates, I couldn’t seem to keep the band members. And it used to be where the agency would call and they’d go “Band of the week, band of the week.” So I heard this over and over. And also there’s being a female. I had a guy that I called to audition once. We set up an audition; he called back an hour later and he goes, “My wife’s not going to let me travel with you.” I mean, I’ve been married it’ll be 35 years on Christmas Eve, so I know where I stand. You know, we have fun, but there’s a line, and we’re not going to cross that line, no one is. If you do, you wouldn’t be here.

Early on, I’d be like, “Oh my goodness, I want to keep these musicians.” Or if there was an issue, I was really learning how to deal with that. Now as I have gotten more experience, I’ve been in the business longer and my tolerance level is gone. If you’re drinking now before the show, you’re fired. But you don’t have that at first. There’s a timeline for that. It’s like trying to get musicians, then trying to keep musicians, and I’ve been through all of that.

Another thing, I had done two mainstream country albums [in the ‘90s] and for the longest time, it’s like, “Are you country or are you bluegrass?” I was clearly playing bluegrass, but I was coming from that, and so I took a mentality of always proving yourself. I felt like I had to prove that yes I am bluegrass. Or [hearing] “Well you’re not going to stick with this.” One time my whole band quit, and people were like “Oh I guess you’ll give up.” It’s like “No, that’s when I call better musicians.” Thanks to my father always saying, “Don’t let anyone say you can’t do something. You just figure out how to do it.”

Did all the band quit within a week’s time?

On the same night.

It was right after we won [IBMA] Entertainer of the Year. I think that was 2001, maybe, yeah. Then there’s the rumors: “Oh she’s hard to deal with, she’s impossible, she did this” So this is the best one I heard and I heard it a lot: That I threw an ashtray at Mike Cleveland, who is blind. That doesn’t even make any sense. Number one, there’s no smoking on the bus so we don’t have an ashtray – or if it was a beer or whatever, I don’t know. I’ve heard that a lot. I mean, it was sort of ridiculous, it’s like “OK, it’s untrue, but whatever you think.”

I’ve worked with so many different things, and different attitudes. It was like, “Oh my gosh, what is the problem this week?” When that changed, I regrouped and for the longest time I would sit there and go, “There’s no issues, there’s no problems. What’s going to happen?” It took a long time to finally relax and go “Great people, great musicians, and how awesome not to have some sort of a meltdown every week about something.” So yeah I am not immune to that and I have been around that, but the more that you progress – now don’t try that with me. Because I’m not going to forget it. There’s not going to be a tolerance for it.

I think leadership comes from the top down, and if you’re out there working really hard and meeting those expectations too, other people will rise to the occasion.

That’s true. And that comes with the fact that I don’t ask anyone to do something that I’m not willing to do myself. In fact I’m even working on getting my CDL’s for the bus.

Is that the driving license?

Yep. Yeah, I never in my life thought I would do that, but we have the electronic logs now, and we have a driver first of all, and then Mickey [Harris, the bass player] is the second driver. But when we went to Connecticut, and they have the timelines of how long they can drive, we nearly ran out of hours. I asked the rest of the guys and nobody was interested. And then I thought, “If I’m willing to ask them, I need to be able to do that myself.” I’ve been in driver training.

I have my permit and everything. I’m excited, I am so excited! It’s so empowering, it’s like, “If I want to go somewhere on my own bus, I’m going to be able to do that!”

Music18 hours ago
WATCH: Joyann Parker, "Out of the Dark"