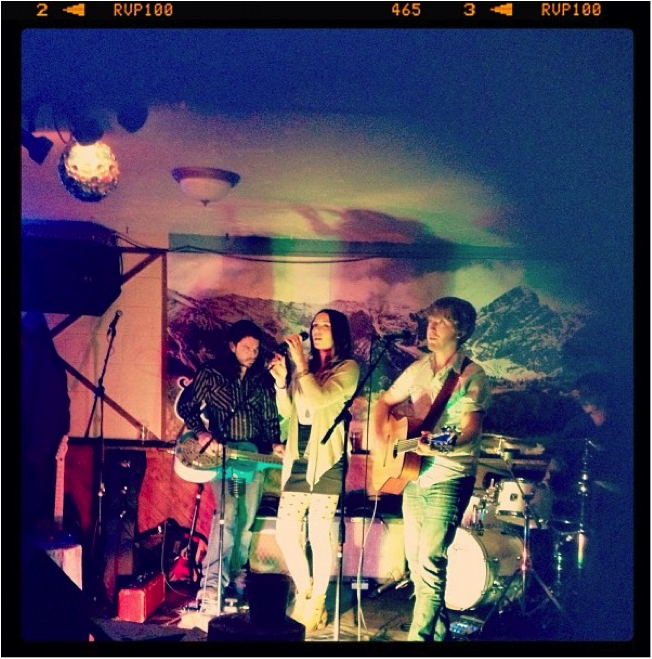 Just a few months ago, on February 22, Colorado-based ROSEWOOD DIVINE played its first-ever set as a full band at the Swing Station Bar in Laporte, Colorado, just outside of Fort Collins.

While the concept of Rosewood Divine ‘the band’ may be new, lead vocalists and guitar players Shaefer Welch and Ali Paine are old pros when it comes to delivering harmony driven, gritty acoustic country music.  Rooted in the rhythmic pulse of a full drum set, stand up bass, and the sliding notes of a dobro guitar, Ali and Shaffer’s effortless harmonies and guitar playing left the entire crowd cheering with their whiskey held high for the encore performance. After their show, Megan Barnett got a chance to speak with Shaefer and Ali and learn more about Rosewood Divine.

First off, how did you come up with the name Rosewood Divine?

Shaefer: Rosewood and Divine are two streets that intersect in Columbia, South Carolina where I grew up. I remember just sitting in my car one day and was like “Rosewood Divine, Rosewood Divine…” and I just kept on saying it and saying it.  Then when I moved to Nashville and started a band with my friend Justin we were thinking of a name for our band and I always wanted to use the name Rosewood Divine but it never fit our country rock band of five guys.  Fast forward to about two years ago when Ali and I moved to Fort Collins and we were riding bikes one day, talking about band names, and I instantly thought “Rosewood Divine”.

Ali: No way! You came up with Rosewood Divine after days of brainstorming –we had been coming up with the stupidest shit. I don’t remember the names we came up with but I just remember having really ridiculous conversations with people about band names.  Band names are one of the worst things to try to come up with because everything sounds so cheesy.  But I really loved Rosewood Divine from the first moment Shaffer said it!

So when did you two decide to form Rosewood Divine?

Ali: We didn’t come up with the idea until we started dating.  I moved from Nashville, TN to Fort Collins, CO and Shaefer followed me out here.

Shaefer: I remember the first time I heard Ali sing.

Shaefer: Yeah, it was at the Exit Inn in Nashville.  She was opening a show and I happened to be friends with Ali’s roommate and she said, “you have to hear my friend Ali sing—you have to hear this one song Winnebago that she wrote.” I knew from then on that I wanted to sing with you.  We became friends after that and it wasn’t until 2 years ago that I moved out to Fort Collins and we decided to form Rosewood Divine.

Ali: We had always wanted to play music with each other but we had never planned what ended up happening. It wasn’t until we got a steady gig at this brewery, the Big Beaver, in Loveland Colorado, that we started to practice every week and had the opportunity to do something more together with our music.

What made you leave Nashville and come to Fort Collins?

Ali: (laughs) Honestly, I was just over Nashville. I didn’t feel like I was getting anywhere. I decided that I wanted to take a different avenue for a while and I wanted to go to Colorado State University for schooling.  I moved to Nashville right out of high school when I was eighteen from my hometown Glenwood Springs, Colorado.  I ended up initially loving Nashville and staying there for 5 years—I was working with a producer who had done some older country hits and I was taking voice lessons and guitar lessons.  It was your typical Nashville story of having high hopes that your music would be a hit and then your dreams falling short.

Shaefer:  My story is pretty similar.  I graduated college and had done an independent CD and played tons of venues in South Carolina.  Song writing is something that comes very easily to me and it’s something I enjoy.  With this in mind, I moved to Nashville by myself and had the same kind of experience as Ali.  I did meet some key people who made a huge impact on my songwriting, but after four years I was kind of burnt out and decided to move to Fort Collins.

Where do you get inspiration for your songs?

Ali: I always have to have the guitar part first.  I find something the sounds good on the guitar and make it happen from there.  For me, songs don’t come that often but I am amazed by Shaefer…he can sit down and write 3 songs in like 45 minutes!

Shaefer: Song writing really does come naturally to me.  I can just hear what I want a song to sound like in my head and then I can write a hook and duplicate it on guitar. I have always worked as a waiter to support my music career and I can honestly say that I have written more lyrics in a server book than you would ever know.  I will be walking around work singing in my head. Most of my songs are story oriented and I do love writing about Love and relationships and life.

How has Rosewood Divine evolved?

Shaefer: It’s been about 2 years that we started playing as a duo.  Ali and I started off playing at the same gig every Sunday.  After a while, we decided to take some of my songs and some of Ali’s songs and tried to take her sound and my sound and create a unified Rosewood Divine sound—and that made the album.  I think you can differentiate our individual songs on that record, but they compliment each other at the same time.  Now a days, though, I feel like I write songs with our unified sound in mind and I think we have really evolved.

How would you define your music? What is your sound?

Ali: We call our sound folk…I think (laughs).  But there is also a strong Americana vibe as well.  The fact that there is now dobro in every one of our new songs brings our sound together.

Shaefer: I’ve started to get really excited about our sound.  We are not trying to reinvent the wheel, we’re just trying to create music that fits Rosewood Divine.  I now write songs with the full band in mind—my thought process is more of writing an amazing song for Ali’s voice instead of me saying that I will let Ali sing a song that I originally intended to sing myself. We have formed this bond where the music is intended for both of our voices, not just one of us writing music and letting the other sing it.  Our band is really picking up on the sound too and things just seem to be flowing in a great direction.

Who would you say is your greatest musical influence?

Ali: Allison Krauss would definitely have to be one of my musical influences.  I think that she has the voice of perfection. When I first started to play guitar and sing and write music I listened to a lot of Gillian Welch, Lucinda Williams—they are more folk Americana for sure.

Shaefer: I was brought up listening to guys like James Taylor, the Doobie Brothers, Jackson Brown, Bob Dylan and Jim Croce.  I remember my parents giving me a Jim Croce album and me looking at the cover and the titles of the songs and thinking, “this looks so dumb”. But then I listened to his music and realized he was an amazing writer.  I really related to his style! I feel that James Taylor, Jackson Brown and Jim Croce all seem to write feel good music and that’s what I love. I got into a mode of listening to very acoustically-driven story songs and I just love to write things that make me feel good.

If you could play with any one band or performer who would you play with and what song (off of YOUR album) would you want to play?

Shaefer: If I could sing a harmony driven song with Union Station that would be amazing.  It would also be amazing to play with Vince Gill.

Ali:  Vince is real deal country, he is not like the commercial country that’s out there today — he is true country roots.

Shaefer: I am obsessed with very good acoustic guitar players.  Dan Tyminski is one and Vince Gill is a heck of a guitar player.   Also, I just love bands that focus on tight harmonies because that is what Ali and I have together.  To be able to play with a band of equally talented people, that would be my dream.

Ali: If we could play our song Winnebago with Union Station that would be amazing!

Shaefer: I mean the chorus of our song is so big and to have people who can sing harmonies with such amazing voices—I can only imagine what Winnebago would sound like.

If Rosewood Divine were a cocktail, what would be in it?

Ali: It would definitely me a mixture of whiskey, beer and fireball.

Shaefer: I would say we are like a hot toddy of flavors, because we love that whiskey bite, but Ali and I love the citrusy, lemon flavor, which is the sweater, more light-hearted aspect of our music.

You can learn more about Rosewood Divine at their Facebook page here.