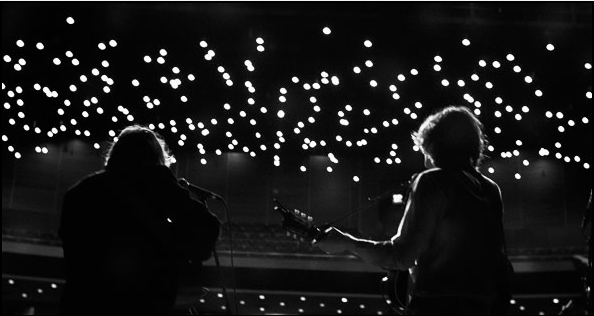 I can’t forget the first time I heard the Milk Carton Kids.  A friend had sent me a sampling of songs from their 2011 album Prologue (which you can still download in its entirety for free via their website), and from the haunting opening chords of ‘Michigan’ I was hooked.  Kenneth Pattengale and Joey Ryan’s intricately woven harmonies and sweet and lilting tunes play out like a soundtrack to a life.

This week, The Milk Carton Kids return to their native Los Angeles with a show at Largo at the Coronet on Thursday, January 12 (for which you can buy tickets here).  Before their show, Joey was gracious enough to answer a few questions for BluegrassLA…

What are your musical backgrounds?

Joey:  Kenneth grew up studying cello and I the clarinet. How much that classical training influences what we do now is questionable, though I’d venture to guess that Kenneth’s history has been much more beneficial to him than mine has to me. When it comes to our current duo, the background comes from the tradition of players and writers that we’ve admired, as we’re both largely self-taught on both the guitar and vocal instruments.

What is your origin as a duo (and where does the name come from?)

Joey:  Our beginnings involved sitting on Kenneth’s porch trading songs from our solo catalogues, arranging them for the burgeoning duo, and becoming friends in the process. It yielded a different approach to songs we thought we knew. A more exciting one, less complicated but more complex somehow. The writing process that came later proved the most meaningful aspect of the collaboration, and gave rise to the lyric and song title ‘Milk Carton Kid’ which we subsequently adopted in the plural as our name.

Can you describe your music and musical influences?

Joey:  When I listen back to our own recordings or performances, I have the feeling of watching someone walk a high wire for the first time without a net, and it’s unclear until the end whether they’ll make it. I wonder if it’s the same for a detached listener. I imagine not.

What are your favorite venues to play in California?

Joey:  We got our start at Zoey’s in Ventura and the Hotel Cafe in Los Angeles, both wonderful listening rooms where we’ll return often. We’ve since discovered the immense honor and joy of performing at McCabe’s in Santa Monica, and anticipate the same when we make our debut this week at Largo at The Coronet.

If you weren’t based in LA and New York, where would you live?

Joey:  ‘Based’ is somewhat of a misnomer lately. A better way to phrase the question would be, ‘to which city do you fly when you have a few days off between tours?’

If you could go back to any decade, what about it be?

Joey:  Nostalgia is a dangerous premise, and futile.

Joey:  Touring, apparently. But this past month off was filled with books on ‘tape,’ yard work, and until I reached the finale a couple weeks ago, Six Feet Under.

Tickets to Kenneth and Joey’s Thursday night show at Largo are still available by clicking here.  You can download albums and check out more about the duo via their website http://www.themilkcartonkids.com.