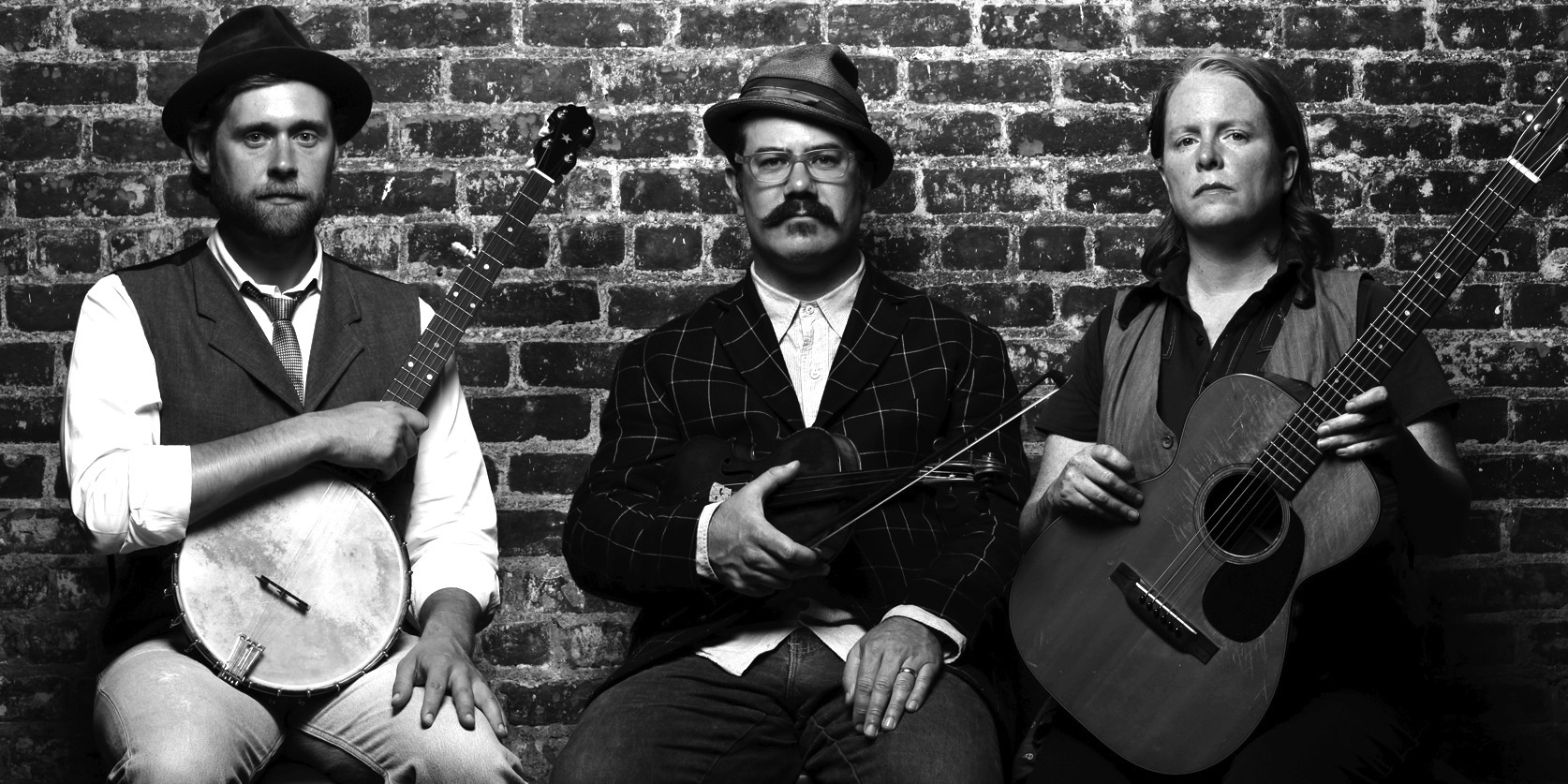 On the first Thursday evening of every month, deep in the heart of Echo Park, something special happens behind the unassuming facade of 1642 Temple Street.  Old-time musicians — from the most experienced, to the freshest young faces — circle up in a dimly lit bar room, chock full of nostalgic atmosphere and the grand, rousing sound of strings and strumming.

This gathering can largely be sourced back to old-time band TRIPLE CHICKEN FOOT, comprised of Ben Guzman (mandolin/fiddle), Kelly Marie Martin (guitar), and Mike Heinle (banjo).  The group performs regularly throughout the county (and beyond) at jams, shows, and their popular square dance socials at venues such as The Echo, HM157 and the American Legion Hall in Highland Park.  They also host the annual Los Angeles Old Time Social, which recently wrapped its seventh year.

The Bluegrass Situation recently got to sit down with the Ben, Kelly, and Mike at their favorite haunt, 1642 (which has since become a favorite haunt of ours as well….):

What are your musical roots?

Kelly:  I was in college in Olympia, Washington in the late 80s and early 90s and started playing [guitar] there.  When I moved to LA for grad school I started playing in a band — but I was a totally self taught guitar player, just writing my own songs and playing around until I discovered old-time music.

Ben: I guess I started playing guitar in middle school (growing up just east of Long Beach).  I stopped playing music in college and just did art, etc.  Ended up in Portland, Oregon, and in that town there was (and is) a big, I guess you’d call it Americana scene, but really it’s just the Portland music scene — lots of American-tinged-country-rock, and then it entered this bluegrass and old time phase.  I was up there photographing a lot of that scene during that time before I moved back here and started playing again — first mandolin, then fiddle.  That’s how I got in to it.

Mike: I grew up in the crappy part of Anaheim, so it was almost a pre-requisite that I play in some heavy metal band in a garage.  Once I got into college I started playing upright bass, played a bit of jazz and got exposed to a lot of different stuff.  Moved to Long Beach at some point and joined a band that played bluegrass, old time and Irish music.  Picked up a banjo and went from there.

How would you define your sound?

Kelly:  We are a traditional three piece old-time band based on the east side of Los Angeles.

What are your biggest musical influences?

Ben:  I’ll say, informationally, as a band, the biggest entry to the rest of the genre for us was Foghorn String Band.  They’re from Portland and they play all over the world and are totally kickass.  But for our sound, we’re just a traditional old-time trio.  Personally, I really like listening to Harold Hausenfluck.  He’s not pretty at all.  He’s just raw.  That and the Roan Mountain Hilltoppers.

Where does the name come from?

Kelly:  It actually comes from a game of dominoes called Chicken Foot.  One time we were playing and I got three ‘chicken foot’ configurations in a row, and as went to put down the third one I yelled ‘Triple Chicken Foot, motherf*cker!’ and suddenly realized, oh wait that sounds like a great band name.

What are your favorite venues to play in LA?

Mike:  Old time has taken me to weirder venues in LA than any other music, for some reason.  We mostly jam [at 1642 Bar in Echo Park] and this is probably my favorite spot.

Ben:  For square dances, we play HM157 and the American Legion Hall in Highland Park, which has allowed us to grow the dances and the band in general, which has been pretty great.

What’s the background of the first Thursday jam?

Ben:  The jam actually started at the Hyperion Tavern when it first opened.  Our friends actually hooked it up as a show at first, and we were billing it as All Acoustic Thursday, and after a while it got a lot to book, and our friend Tom Sauber was looking for a new weekly jam.  There was nothing going on from Pasadena all the way to center city, so we decided to invite people over for that.  Once the Hyperion Tavern closed down, and we ended up here.  We all kind of live around here and couldn’t play too late in our houses, and it was just so great to have it [at 1642] to play well in to the night.

Mike:  And it made it an easy entry point for people who were just getting started.  Sometimes, it’s so tough because you have to know people — not that it’s exclusive, but that you have to know how to get in to these house jams and stuff.  But here, you can just kind of show up and try it out and get to know folks.

Ben:  It would have to be beer for myself.

Mike:  I’ve been known to carry a half gallon of chocolate milk with me at festivals.  I’ve brought it to jams, and I get funny looks.  But I don’t care.  I love it.

Kelly:  Depends on the time of year — right now I go for a chilled glass of rose or white wine.

If you didn’t live in LA, where would you be located?

Ben:  There’s no where else I’d be.  I come from Southern California, I’ve lived up the west coast.  Whenever Kelly and I travel we talk about living somewhere else, but to be honest, nowhere is as exciting — not in the Hollywood sense of the term — but in a place that’s full of potential.  Everywhere else just wouldn’t compare — might be prettier, but it would be kind of boring.

Mike:  What it comes down to is boundaries.  LA is boundless.  For me, it’s gotta be that or some place completely remote, which in turn is also boundless.  There’s something great in the potential for unknowing.

Kelly:  For me I’d have to say it would be Ham Ji Park Korean Barbeque in Ktown.

Kelly:  And a chocolate milk!

You can see Triple Chicken Foot in action at 1642 Bar in Echo Park, or at their frequent shows, old time socials, and square dances around town.  Learn more about the band at triplechickenfoot.com