The Dead South Have a Message for Bluegrass Purists 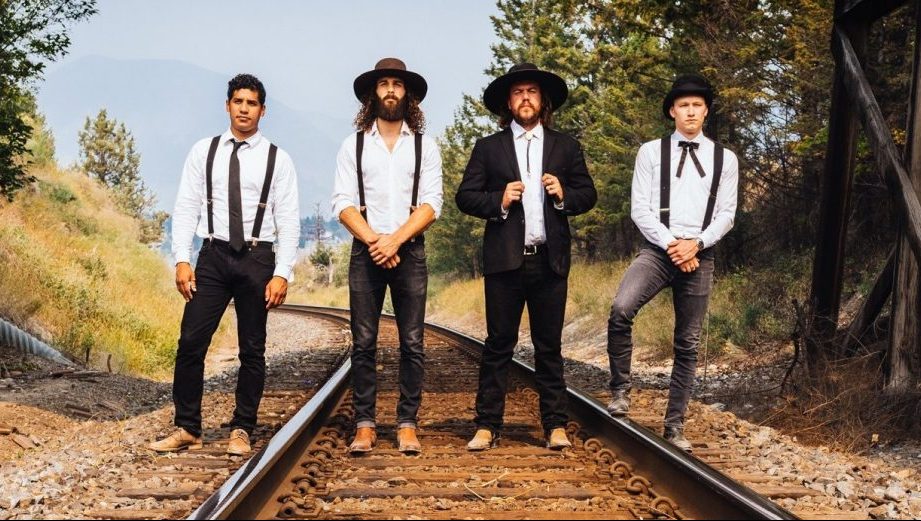 The Dead South is actually from up north, but the Canadian band has cultivated a following in stateside circles too. With a raucous approach to roots music, they’ve been guests of SiriusXM’s Bluegrass Junction, showcased at IBMA’s World of Bluegrass, and recorded their newest album, Sugar & Joy, in Muscle Shoals, Alabama. Upon its release, they debuted at No. 1 on Billboard’s top bluegrass albums chart.

That grand entrance is setting the stage for significant touring over the winter, with West Coast dates starting in November, followed by Midwest gigs in December. They’ve already confirmed European dates for February through May 2020.

Formed in 2012, the band is back in its original lineup of Nate Hilts (vocals, guitar, mandolin), Scott Pringle (guitar, mandolin, vocals), Danny Kenyon (cello, vocals) and Colton Crawford (banjo). Maybe it’s important to note that there’s neither a fiddle player nor a drummer in this band — or you know, maybe it doesn’t matter one bit. Hilts and Crawford chatted with BGS during some downtime at IBMA’s World of Bluegrass business conference.

BGS: “Diamond Ring” but doesn’t end well for one of the characters, which is common in bluegrass. What story were you trying to tell in this song?

Nate Hilts: It’s a story of a man who’s trying to appease his partner. She finds that a diamond ring would make her happy and so he is going to do whatever he can to make sure that he gets that diamond ring for her. And it turns out to be a tragic ending, of course. Just like all of the songs I write. [Laughs]

Did you know it would end so gruesome?

NH: You know what, no! But when you’re doing a video it’s like, yeah, we need a body count!

Videos have been a crucial part of your career. Do you find that that’s been a good way to be introduced to new fans?

Colton Crawford: Yeah, I think so. We had our first big splash with the “In Hell I’ll Be In Good Company” video. So I think a lot of our fans discover us through YouTube. I think like our songs work well with music videos, too. They’re cinematic and “soundtrack-y.” We’re definitely inspired by film soundtracks and Tarantino and Spaghetti Westerns.

Are there filmmakers that inspire you or that really resonate with you?

CC: Clint Eastwood for sure. Tarantino for sure. Even those old B horror films, Wes Craven and that kind of stuff.

NH: You could give us an array of movies and we’ll find stuff that we like about it. Who did Drive?

CC: That was Nicholas Winding Refn. That movie is all about the atmosphere. I think our songs are kind of like that too.

Was there a certain encounter that triggered you to write “Blue Trash”?

CC: Lyrically, yes. [Laughs]. This one was a lot of fun for me because the verses and the chorus are the same banjo part. It’s just the choruses are played in halftime with that shuffle feel, but it’s the same thing. I do a couple of different bends and stuff like that. I came up with that slow part first and wanted to “Scruggs-ify” that slow part, so it was a lot of fun.

NH: But lyrically that song was triggered by listening to a purist group on Bluegrass Junction [that was dismissing] bands like us, who aren’t quite pure. You know, we stem from bluegrass, but we do our own thing with it. And this song we heard was basically telling us to go away.

CC: “Blue Trash” is sort of like a cheeky love letter to bluegrass. It’s a bit of a response to that.

NH: It’s not a hateful or hurtful response. It’s more like, you know what, we’re here and we love bluegrass music.

So what’s your response when someone’s like, “Well, they don’t play bluegrass…”?

NH: “Yes, you’re absolutely right, but what do you want us to do?” We’re not saying that we’re playing bluegrass. We love bluegrass. The reason that this band was started was bluegrass. And here’s what we do with bluegrass. We take our parts of it. Colton on the banjo, he’s playing better than half the folks you hear on Bluegrass Junction, and [it’s] fantastic that we can have those elements, but we’re not claiming to be the best, or to be stealing it. We’re just trying to be a part of the community and play music.

Tell me about what you mean when you say the band started because of bluegrass.

NH: Oh, when I first met Colton, I was listening to a lot of Old Crow Medicine Show and Trampled By Turtles and listening to some older bluegrass. Colton had just got a banjo, started playing.

CC: Steve Martin was the first actual banjo player that I listened to. Actually there were indie bands that I was into in high school and university, like Modest Mouse — their one record Good News For People Who Love Bad News, there’s a lot of banjo on that. I always just loved the sound of it. And then I discovered that Steve Martin was a world class picker.

I was always a metal guitarist. So there was actually a lot of crossover. I just love that fast picking style… Growing up, my guitar lessons were all classical fingerstyle guitar, but then I played in metal bands in high school. So the banjo is like the perfect middle ground between an acoustic fingerstyle guitar and metal guitar.

Colton, did you take some time off?

CC: I did, yeah. When we first started the band, we just hit the ground running with the touring and we were making no money. So we’d be on the road for a month and a half to two months at a time in a minivan, playing every single day. … I’ve always had this tough time sleeping, but I had a year of really, really bad insomnia. I think the worst part about insomnia is that you’d think at a certain point you get so exhausted that your body would just pass out and you’d have a great sleep. But the thing with insomnia is the more tired you get, the less likely you are to sleep. It’s the worst, it’s just hell.

I went through a year of that and I just said, OK, I’ve got to step away from this. And of course, like two weeks after I left, “In Hell I’ll Be In Good Company” got posted to Reddit and everything started to blow up. But I was still really good friends with Nate, kept in touch with the guys all the time, always figured that’d be part of writing the next record regardless. And then I got some help and figured it out a little bit. Then sort of approaching it a couple of years later, I just said, you know, I want to take another swing. Thankfully these guys, they could’ve told me to fuck off, but they didn’t. So I’m grateful for that.

NH: Yeah, Colton wouldn’t even look me in the eyes when he sat down with me. He was doing a lot of this [looking down]… “I’ve been thinking…” and just staring at the table and I’m like, “What’s he going to say? What’s coming?”

CC: I had no idea how you guys were going to react at all.

NH: He said, “Hey, we should go for a beer, I want to talk about something.” I was like, “I think he’s going to come back.” [Laughs]. In our minds I was like, he’s probably never coming back because we travel a lot and that was a big, big part of it. So what do you do? Unless we stop traveling as much as we focus just on writing or something.

NH: Yeah, for what we do, besides YouTube content, the way that we’re able to function so well is by touring.

CC: Yeah. Our main product is our live show. I love our records but definitely our show is what we do.

Tell me about when you’re off stage. What is your dynamic like?

CC: It’s pretty much just like this. Just hanging out and everyone gets along pretty well for the most part, which is really nice. We’ve been a band for almost seven years now and we still like being around each other, so that’s good. Yeah, it’s a lot of fun. We always say we’re friends first, a band second, and a business third, so we try and keep that in mind.

What do you hope people will take away from that experience of seeing you guys play live?

CC: I think most people show up for a really, really good time, and that’s what we’re trying to do. We’re not a political band. We don’t really have any kind of message. I think our main focus with the live show is just fun. It’s a weird thing because it’s almost frowned upon in the arts. You know, [the perception is that] if something’s fun, it can’t really be true art. We don’t agree with that at all. I don’t think there’s enough fun these days. Everything’s so serious all the time, so we just want people to come and enjoy themselves and have some fun.

It stands out when a band’s having fun, because there’s a lot of serious songwriting and sadness out there.

NH: We write tragically, but a lot of times we have humorous spins on stuff, or the song sounds super cheery but it’s actually quite sad. But we still have fun with it. We don’t take ourselves too seriously.