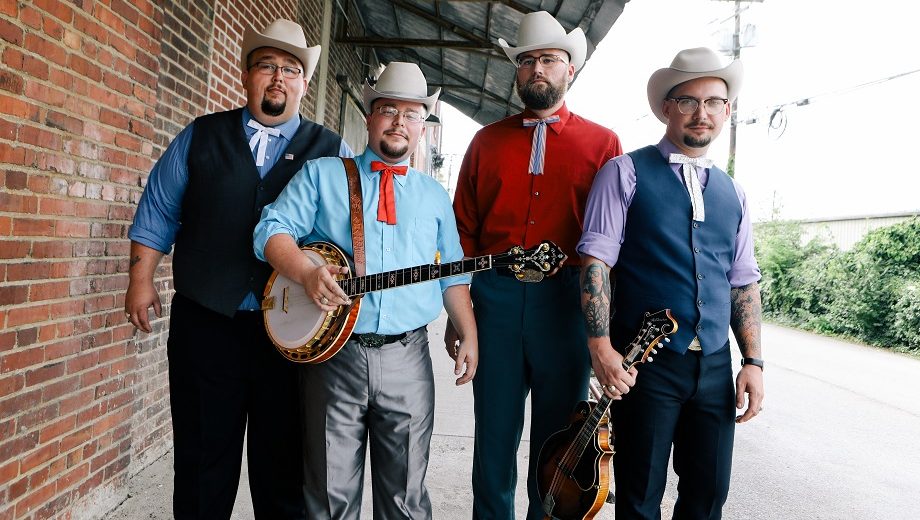 Plenty of artists find a day job while they work on their careers in music. CJ Lewandowski found a career in music while working his day job. A mandolin player and singer, he was working at Ole Smoky Distillery in Sevierville, Tennessee, and would frequently fill in as musical entertainment when a hired act fell through. Eventually, the distillery approached him about forming a band, and the Po’ Ramblin’ Boys were formed.

“There’s never really been a plan,” jokes Lewandowski, who says that regular hours on stage helped the longtime friends tighten up fast as a band. “We play the music that we like, and we happen to have some songs that we’ve written.” That no-plan plan has gotten them pretty far. In 2018, the group won Emerging Artist of the Year at the IBMA awards and in August they released their Rounder Records debut, Toils, Tears, and Trouble. They’ll also appear at Bourbon & Beyond festival in Louisville, Kentucky, on September 20.

The twelve-song album includes fan favorite “Old New Borrowed Blue,” an original, as well as inventive interpretations of songs by legends and unsung genre heroes alike. The band’s Stanley Brothers-inspired take on Roy Acuff’s “Searching for a Soldier’s Grave” is right at home alongside the Boys’ rendition of “Bidding America Goodbye,” made popular by Tanya Tucker. And “Next Train South,” originally recorded by Dub Crouch, Norman Ford & The Bluegrass Rounders in 1974, pays homage to the bluegrass tradition of Lewandowski’s native Missouri.

Lewandowski opened up to The Bluegrass Situation about the role music played in his upbringing, how their days as a house band helped the Po’ Ramblin’ Boys find their footing, and why old-time music will never fade away.

BGS: What first brought you to bluegrass?

Lewandowski: I found bluegrass when I was a teenager, at a time in my life when it felt like everything was leaving me. I was a mama’s boy, and my mom passed away when I was ten. Then I had some other folks, family members, pass away. Things were changing within myself as well. I was trying to discover myself, and all this other stuff was piling up on me, too.

I found bluegrass music at that time, and along with it, I found a bunch of friends. I was never somebody with a bunch of friends in my own age bracket, and all these folks playing music around home here were thirty, forty, fifty years older than me, but I related to them. My grandpa died around that same time, too, and he was a pretty big influence on me, so I found some folks that became grandfather figures to me. They took me under their wings.

One thing I say a lot is that bluegrass has always been there for me. It’s been my medicine. It’s helped me through all those hard times, and put me in a lot of good situations, too. It’s a constant — it’s always there.

For Toil, Tears, and Trouble, you recorded several songs that were written or made popular by other artists — “Bidding America Goodbye,” “Cold Hard Truth” — as well as less-known songs by Missouri bluegrass artists. Why?

There’s a lot of great material out there. You could take a really popular song and completely change it and make it your own, or you could take a song that doesn’t even sound like it would apply to your music — the songwriter might not even know what bluegrass music was, but the song is great — and we can put our bluegrass touch to it and make it something that works. We like to pay homage to people of the past, but we want to start our own past as well, carve our own little niche out.

We’ve got songs on the album that have never been recorded before, by anyone, and that doesn’t mean they have to be written in-house by the band. “Hickory, Walnut, & Pine,” “Next Train South”– most people have never heard of them. It’s cool to dust off those songs, to pay homage to someone who might have not been in the limelight as much as Jim & Jesse, or the Osborne Brothers, and then add our own influence.

So obviously you’ve been inspired by bluegrass, but I’m sure you haven’t been entirely insulated from other kinds of music. You recorded a gospel album a few years ago, in fact. What other genres of music have impacted the way you sound?

Gospel has always been a part of all of our raisin’s. Country, of course, has influenced us too. If we all weren’t playing bluegrass music, we’d probably be out playing old country stuff. We all like steel guitar, and we all like twin fiddles. We all really like ’80s and ’90s country a whole lot, too — Alan Jackson, Randy Travis. We’ve been called honky-tonk bluegrass. And you never know where you’re gonna find something new.

With your job as the house band at the distillery, you logged more hours of stage time than most bands do in years of their careers. How do you feel like that experience benefited you?

We were playing anywhere between five to ten hours a day, sometimes seven days a week, [we] were teaching people about bluegrass music and entertaining them at the same time — and working day jobs. It was almost like a paid practice. We learned pretty quickly that imagery was a huge part of the show. We started in bib overalls, and then we’d go to summer suits, with our hair styled, and then we’d go to the cowboy hats for the springtime.

There’s always been a progression. There has to be something. You have to realize that a lot of the folks who came into that distillery didn’t know what bluegrass was, and they left with a sense of it. We were exposing new people to bluegrass music, which has always been a goal of ours. It was an education for them, but an education for us as well — all the while, we were getting tighter as a group. We spent over a year and a half solely playing at that distillery, with no intentions at all of traveling or anything. It allowed us to hone in on a lot of things together.

You often hear people describe your music as “old-time.” What does that mean to you?

The music that we play is the music that we were raised up on. There’s always been a progression to bluegrass music, since the very beginning of it. You can look at when Flatt & Scruggs came on the scene — key changes, tempo changes, five-string banjo roll, all that crazy stuff. So over the recent years of bluegrass music, it’s progressed, but it’s progressed somewhat faster than we — the band, I mean — may have wanted it to.

Are there any aspects of bluegrass music that you think it’s particularly important to try to preserve, or that you worry are vanishing?

Excuse my language, but I think that’s a big ol’ crock of shit. This music has been around for a long time, and it’s bigger than it ever has been. Yes, everywhere has their own definition of bluegrass and how they want to play it and how they want to present it. And there’s a lot of freedom in that. Just look at Bill Monroe: He evolved until the day he died. I’d tell anybody, just play the music that you love, and if you’re true to yourself and true to your music, the music can’t die. It won’t die. It’ll never die.