The Secret Sisters’ Laura Rogers: From Separation to ‘Saturn Return’ (Part 1 of 2) 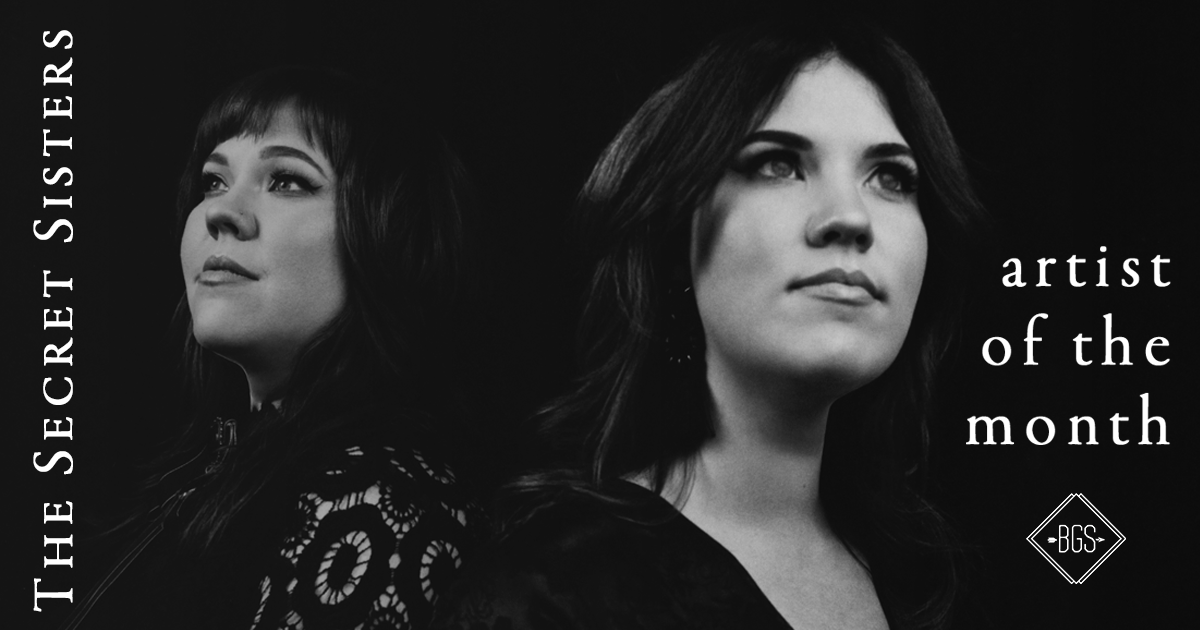 Laura Rogers and Lydia Slagle are best known for doing things together. As sisters, they’ve celebrated birthdays, graduations, and many more of life’s big milestones together. As the Secret Sisters, they’ve made a name for themselves singing together, with intuitive harmonies that lend a honeyed sheen to folk tunes, country anthems, and the occasional murder ballad, too. But for their latest album, Saturn Return, the duo tried things a little differently.

At the suggestion of Brandi Carlile (who co-produced Saturn Return with twins Tim and Phil Hanseroth), Laura and Lydia recorded their vocals separately for the first time, integrating lengthy solo segments in addition to their trademark harmonies. The resulting record reveals two women at the top of their crafts, reveling in their independence while cherishing the inimitable depth of their voices together.

In tribute to their recording individually for the first time, BGS spoke to each sister separately, too. In part one of our Artist of the Month interviews, Laura talks about the influence of her hometown, self-inflicted career pressure, and how Carlile introduced the sisters to new sides of themselves — both individually and as a group.

BGS: You sang separately from your sister on this album for the first time. What did that feel like at first, and how did your feelings about it evolve?

Laura Rogers: I was very uncomfortable about it at first. I play off of Lydia, and I choose my notes based on what Lydia chooses. We read each other so closely when we sing together. Singing without her felt like driving a car for the first time without your parent in there. But when Lydia sang by herself, even though I know she was uncomfortable, I sat there listening to her and thinking, She is so good. She’s so good. I remember thinking about how glad I was that her voice was finally going to get a chance to be heard without mine, because her voice has so much beauty to it.

I thought, It’s time for people to hear what Lydia sounds like without me distracting them. But I was super scared to sing by my self, just because I … Well, I just don’t feel like I sing as well without Lydia. I’m more critical of myself, and I don’t have her to kind of pick up the slack that I need. [Laughs] So in the moment, I remember thinking, I don’t know if this is the right thing. How are we going to pull it off live? But then of course, after the record was done, we would listen back to it, and Brandi’s theory about it was so… right. And so beautiful.

While we were recording, Lydia and I really were in really separate places for the first time in our lives. I was pregnant and Lydia was trying to get pregnant. We felt this chasm, the two of us. We felt like we were in different places. Brandi could see that, in her bird’s-eye view of our circle. She knew that she needed to capture that moment.

Lo and behold, a few months later, we found out that Lydia was pregnant too, and we were back on another path together. We had been separate for only a moment. So I’m really thankful. I feel like Brandi is a really good photographer who caught the perfect moment with the perfect light and the perfect ambiance — this really special moment that will never come again.

You’ve recorded murder ballads and darker songs, and “Cabin” on this record — which you’ve said grew out of coverage on the Kavanaugh hearings — touches on a crime that was never brought to justice. What are the challenges and nuances you have to consider when broaching topics like those?

That’s a good question. “Cabin” can really be about a pretty broad range of crime. But we were specifically writing about sexual crime: abuse, harassment, and mistreatment of people by those in places of power. We had a message that we wanted to convey, but it felt like we had to tiptoe around some things to try to avoid any sort of heavy political slant.

Lydia and I are not political songwriters. We just aren’t, and don’t want to be. But there are certain elements of that that do come up in our writing that we feel like we have to kind of carefully craft in order to express ourselves, but not isolate. That’s also true with murder ballads. It is a sensitive subject matter, and our protection — up until we wrote “Cabin” — was the fact that those songs that we had written were mostly fiction.

When [our songs] talk about getting your heart broken, or going through bankruptcy, or being done wrong by someone who is supposed to be your friend, those are actually based in truth. We would never specifically mention anyone by name, but if they hear the song, they’ll know that we’re talking to them. If you feel like we’re singing to you, we are.

That’s the way that we view our music — as therapy. The murder ballads have always been about us challenging ourselves to write songs about things that we didn’t experience. On the flip side of that coin, there are a lot of songs that we went through firsthand and had to process through writing.

You sing about the push-pull of success in “Nowhere Baby.” What does that song mean to you, and how do you fight back against the low moments?

I hope that people can find their own story in a song like that. For us, “Nowhere Baby” is about constantly feeling like we’re arm wrestling the music industry; feeling the need to say yes to everything that comes along, because you’re afraid that if you say no you’re going to set yourself back or miss an opportunity; feeling like you need to prove yourself. As artists, creative souls, and women, sometimes we put that on ourselves. We make these ridiculous schedules that we think we have to stick to. “If we don’t go do this show, what’s gonna happen? Are we gonna miss something that could be really important, could get us to the next level?”

We are so hard on ourselves about our careers. We love music, and we love that we’ve gotten to make a lifestyle of playing our songs on the road, but it’s a hard life. You sacrifice more than people on the outside ever realize. You miss the birthday celebrations and the holiday events. Through experience in the ten years that we’ve been on the road, we’ve learned that it’s OK if you need to just be a person for a minute. It’s OK if you want to just sit at home for a few weeks. Nobody’s gonna forget about you, you’re not going to lose your edge.

You’re from just outside of Florence, Alabama, and started singing harmonies with your sister at church. Did your hometown have any impact on the artist you are today?

Oh yes, 100 percent. We grew up pretty close to Muscle Shoals, which is obviously a legendary place for music. But we weren’t exposed to the music of Muscle Shoals as much as you might think. We listened to more folk music, bluegrass, gospel, and country. And where we are geographically had influence on us as musicians — I mean, it’s this weird little place that’s so perfectly located. It’s close to Nashville, so you get the country music influence. It’s close to Memphis, so you get a little bit of the blues. It’s close to the mountains, so you get some Appalachian music. You get gospel music, because we’re in the middle of the Bible Belt. It’s this perfect spot where these little genres of roots music all began.

I think living in a rural place, and growing up where there isn’t a lot to do other than hang out with your family or do sports or play music, is why we are the way that we are, and why we’ve become the musicians that we’ve become. We are so spiritually tied to our hometown. When I leave, I become a different person, and it’s almost like I have to go back to regroup and establish myself again. I come home and I’m like, oh, that’s who I am. [Laughs] I may get to go to all these great places, but when I come back, I’ve still got to scoop up chicken poop off my porch.