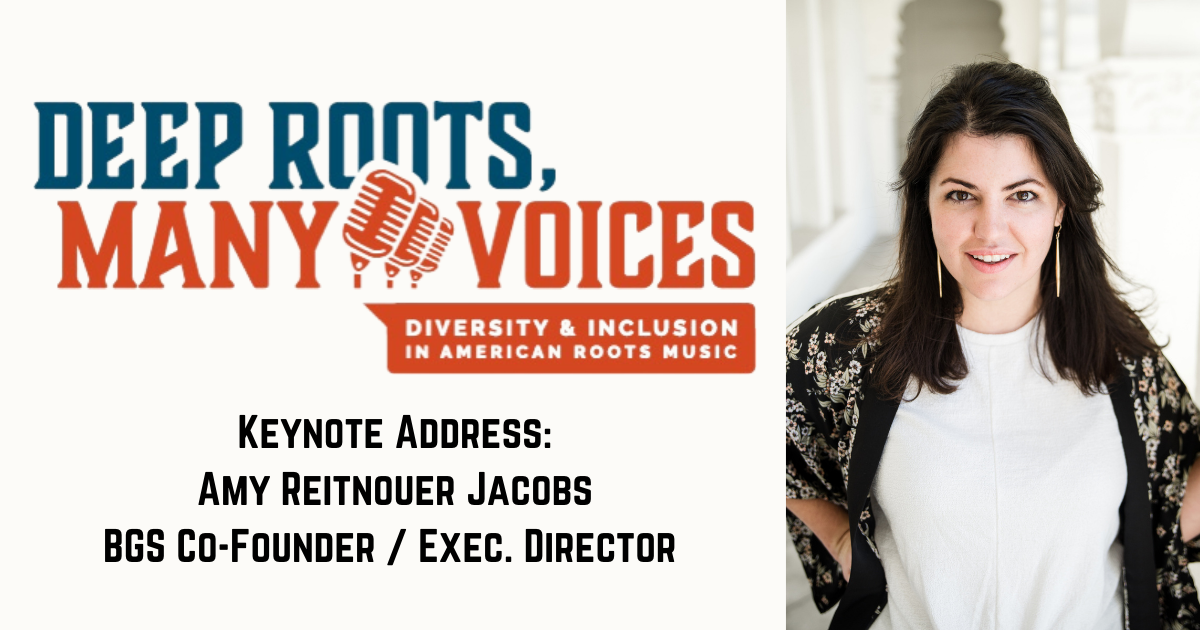 Welcome and thank you for joining me today at Blue Ridge Music Center’s Deep Roots, Many Voices symposium.

My name is Amy Reitnouer Jacobs, and I am speaking to you today from the indigenous land of the Keech, Tongva, and Chumash people, now known as Los Angeles, California.

A little background about myself. In 2012 I co-founded The Bluegrass Situation with my business partner Ed Helms, with the goal of bringing roots and traditional music in its many incarnations to a younger, more internet savvy generation of existing and potential fans.

Since that time, my role within this industry has expanded, I have been an event producer for the International Bluegrass Music Awards, Bonnaroo Music Festival, the LA Bluegrass Situation, and other live activations; I’ve been an artist manager for talent ranging from Aubrie Sellers, Jamie Drake, and Matt the Electrician to Wilco’s Mikael Jorgensen; and I’ve proudly served for the last eight years on the board of directors of Folk Alliance International, where I am currently Board President.

Truth be told, I never intended this career. I moved to Los Angeles to work in the film and television industry, but quickly – albeit somewhat accidentally – found that my “people” were not in corner offices of movie studios, but playing their own style of bluegrass music in sweaty, crowded bar venues on the west side of the city. Once I entered the scene, however, I could clearly see where the genre’s biggest needs were – pay gaps, lack of representation, and a general disregard by an old guard for those who were too young, or female, or gay, or not-white-enough. In the years that followed I have re-focused my attention on giving a platform to those who have long deserved better.

I recently heard someone say “being of good intention does not always equate to action.” So today I’d like to present to you several small action items that you can to do that can make a big impact in your musical community.

So here we go: seven small ways to make a better industry (in any way you can!):

In a world that is consistently overwhelming, it can be difficult to feel like our actions can lead to any real difference. And many of these issues – specifically those faced by women, black and brown people, the AAPI community, and queer and trans folks – have been built to systemically oppress over hundreds and hundreds of years.

Rhiannon Giddens was recently quoted in a Vulture magazine interview, saying, “It’s not going to change overnight, but we can change a lot of little things quickly.” These are some of the most important changes of all – small and deliberate and real; over time, these are the actions that seed lasting change.

Folk and roots traditions are by definition the music of all people. It may take some longer to see that the music we love and represent was not just magically invented out of thin air by a few old white dudes from the past. So let’s start changing that story by working on our own tiny actions every single day.

Thank you to the Blue Ridge Music Center for your invitation to speak today. I am consistently impressed by your wonderful team and your extraordinary work. Thank you for showing all of us how rich and deep of a story there is to tell, and how much more there is to learn; and special thanks to all of you for being here and listening – I hope to see you down the road soon.