The Show On The Road – Allison Russell 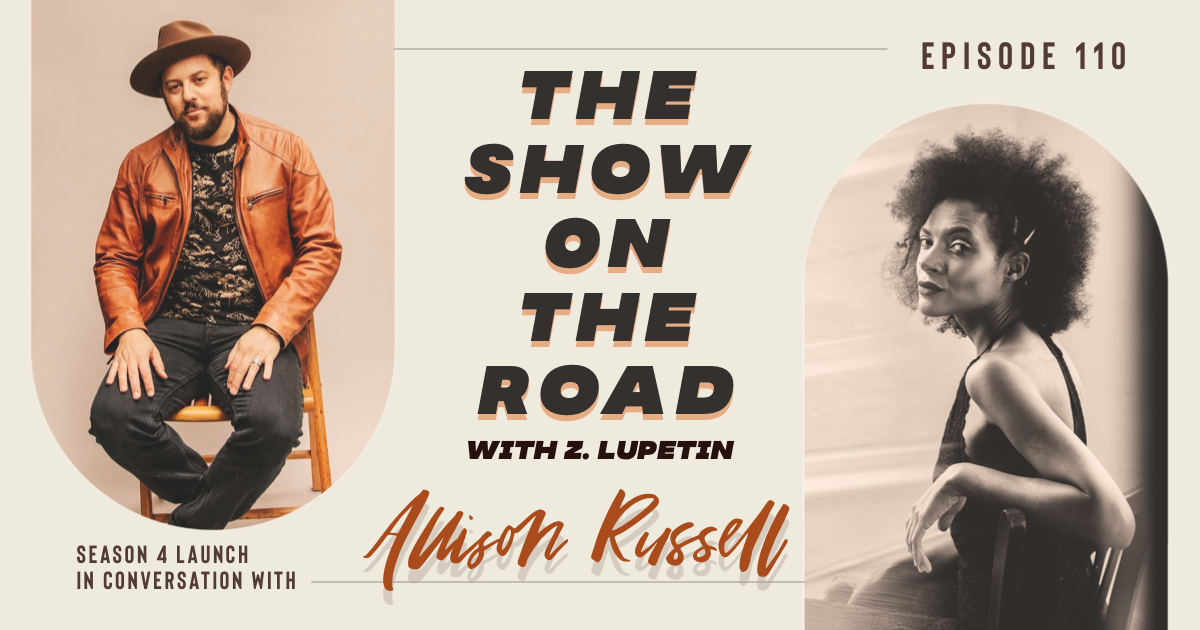 This week, we launch season 4 of the show with a bilingual banjo-slinging singer-songwriter originally from Montreal and now based in Nashville: Allison Russell.

After two decades of quietly creating heart-on-her-sleeve roots music in hard-touring groups like Po’ Girl, Birds Of Chicago, and recently the supergroup Our Native Daughters – playing the guitar, clarinet, banjo and singing in English and French – the spotlight finally fell straight on Russell in 2021. With the help of her husband and longtime creative partner JT Nero, she released her visceral debut solo record Outside Child which confronts her traumatic childhood head on.

Rarely has an album struck such a nerve in the Americana community, as songs like “4th Day Prayer” use the slippery soul of Al Green’s best work and Mahalia Jackson’s gospel inspiration to paint in white-knuckled detail how she escaped the abusive home of her stepfather for the graveyards and streets of Montreal. As she tells us in the intense conversation from her home in Tennessee, it was her songwriting hero Brandi Carlile who went to bat for her (a bold Instagram DM set fate in motion,) helping get her raw, unreleased songs to Fantasy Records. Thankfully, they wanted to take a leap. Even President Obama noticed after the songs began to circulate and he put her ominous radio standout “Nightflyer” on his favorite songs of the year list. The album has since been nominated for three Grammy awards.

While Allison may feel like an “overnight sensation” to those just discovering her on AAA radio, hearing her soaring voice shining on stages from Carnegie Hall, Red Rocks and the Late Show With Stephen Colbert, she’s been playing hundreds of shows in small clubs and festivals around the world for twenty-two years and counting. It hasn’t been an easy road, as she often had to her young daughter on the trail with her.

With a new book deal in the works continuing her story where Outside Child left off, there is much more to come from Russell. A champion for the often forgotten victims of domestic and sexual abuse, listening to Russell speak reminds one more of a fiery community organizer than a singer. Did your host try and convince Russell to run for office? Maybe.

Stick around to hear her dive into one of her favorite tracks from the new record, the hopeful clarinet shuffle “Poison Arrow.”