The Very Best of AmericanaFest 2015 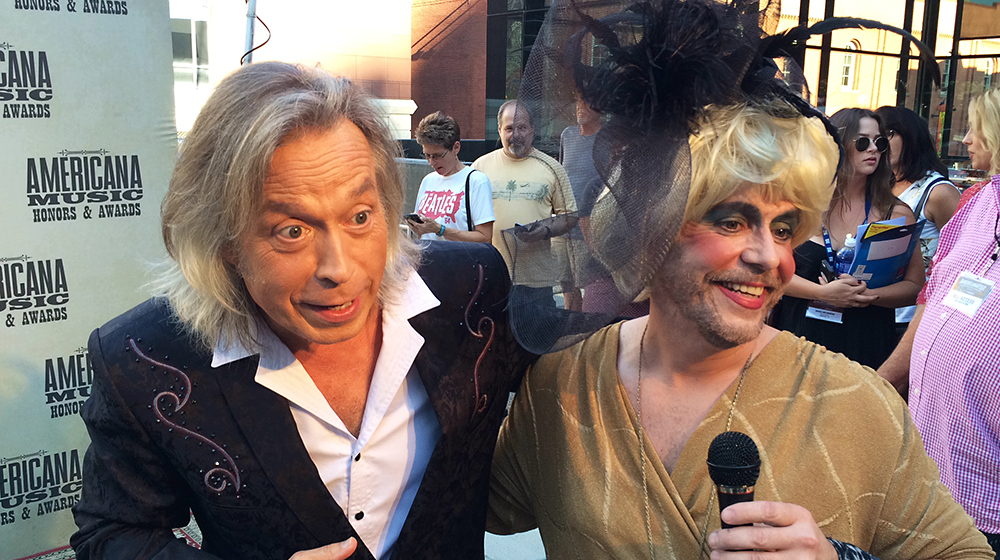 Ah, AmericanaFest. You little charmer, you. Spread out across six days and the whole of Nashville, you offer up the best roots music has to offer, from the cool country of Lee Ann Womack and Loretta Lynn, to the raw soul of Nathaniel Rateliff and Anderson East, to the heartfelt folk of Erin Rae and Caroline Spence, to the homegrown bluegrass of Della Mae and Rhiannon Giddens. You walk softly, AmericanaFest, but you carry a whole bunch of beautiful sticks.

The Bluegrass Situation's Late Night Windup basically kicked off AmericanaFest at Nashville's notorious venue, the Basement. Festival patrons could swing by, pick up their badges and wristbands, and enjoy cold one in front of Della Mae, the Wood Brothers, and a rowdy jam led by Punch Brothers' own Noam Pikelny. BGS's Brittney McKenna has the full story right here. — BMc

This is not a full-on-endorsement, but Cookout saved my life Tuesday night. A corndog as a side?! Get outta here. — CM

A bunch of folks crammed into RCA Grand Victor Studio A to hear a “Songs We Love” songwriters' round of Patty Griffin, Rhiannon Giddens, and Shakey Graves moderated by NPR Music's Ann Powers. Not us. We were hunkered down at the Station Inn filming four fantastic Sitch Sessions with Lera Lynn, Anderson East, Caitlin Canty, and Ryan Culwell. Swoons all around. — KMc

And then … THEN we hit the Americana Awards show red carpet at Ryman Auditorium with Marlene Twitty-Fargo and a bag full of mini whiskeys. Lee Ann Womack tried to put her long-standing feud with Marlene to rest by doing Fireball shots, while Keb' Mo' attested that “All the rumors are true,” as he posed for a selfie with Miss Marlene. Jim Lauderdale didn't quite remember the night so long ago that Marlene mistook him for George Jones in a Nashville bar, but the McCrary Sisters were the brightest highlight, singing a glorious verse of “Amazing Grace” with Marlene. Everyone outside the Ryman crowded around to hear. — KMc

Watching Marlene Twitty-Fargo and the McCrary Sisters belt out some American gospel music on the red carpet was beyond surreal. You know what else was surreal? Marlene interviewing Ricky Skaggs, bombing shots with Houndmouth, and trying to keep up with Nikki Lane. A star was born in Nashville this night. — CM

Nathaniel Rateliff set the 10 pm crowd at Mercy Lounge on fire with his soul band the Night Sweats. The set ended with "S.O.B." — the Missouri man's newest, hottest single. Many drinks were bought within those three-and-a-half minutes. Up next was Watkins Family Hour, a band we're pretty fond of around here. To my surprise, Fiona Apple tagged along to Nashville on the band's current tour. Watching her eviscerate the crowd with heavenly melodies was a festival highlight for me. — CM

Lera Lynn summoned folks into Mercy Lounge with her sultry brand of Americana, pulling her set largely from last year's The Avenues with stellar tunes like “Out to Sea” and “Standing on the Moon.” She also proved that, yes, she had portrayed the barely living bar singer on the recent season of True Detective when she took a creepy/haunting swing through "My Least Favorite Life." With her suit-clad band, Lynn knows how to do it up right. — KMc

@leralynn has a packed house. And for good reason! #mercygoesamericana #americanafest

The Legendary Shack Shakers put on, possibly, the most punk rock show of the festival at the High Watt. Singer J.D. Wilkes screamed with abandon and summoned the harmonica gods on several cuts from the band's recent record, The Southern Surreal. — CM

Having made herself right at home in Americanaland, Lee Ann Womack was relaxed and feisty at 3rd & Lindsley as she offered up tunes that spanned her career, from “Never Again, Again” to “Chances Are.” Man alive, that gal can sing! Before she brought out two extra fiddle players for “I May Hate Myself in the Morning,” she asked, "How country do you like it? Or better yet, how country can you take it?" While I was busy basking in this particular glory, word has it JD McPherson was blowing the roof off the Cannery Ballroom. — KMc

Over at City Winery, Anderson East cajoled and crooned his ass off in an attempt to get people to dance. He even hopped off the stage and ran a lap around the room. Finally, as he blasted his way through “Knock on Wood,” a bunch of folks gave in and grooved. Once up, they stayed up for “Find 'Em, Fool 'Em, Forget 'Em” and the rest of his killer set. East joked that he wasn't sure why he and his horn section were considered Americana, but he was having a great time anyway. — KMc

Sadly, none of us made it over to Fond Object to catch John Moreland's set. Ann Powers was so enthralled that she dubbed him the "true heir to Townes Van Zandt." — KMc

Emmy Rose Russell, Nikki Lane, Tift Merritt, Valerie June, and even Steve Earle (who delivered a beast of a set) were all just killing time as the crowd at Ascend Amphitheater waited for Loretta Lynn. Come show time, Lynn graced the stage in a new red sequined dress which she said weighed 300 pounds, as an excuse to sit down: “It's too big, so if it falls off, just keep clapping.” Lynn encouraged the crowd to shout out requests until one woman yelled, “Delta Dawn.” Lynn fired back, “My name's not Tanya Tucker! I don't even know that song.” She did, however, know “The Pill,” “Fist City,” “You Ain't Woman Enough to Take My Man,” and “Coal Miner's Daughter.” I saw Loretta … What else is there to say? — KMc

Loretta Lynn is still singing strong and on the road. #americanafest #tw #ascf

Having to follow Loretta isn't an easy take, but Gillian Welch and David Rawlings were up to the task. However, while watching their legendary opening act, Rawlings turned to Welch and said, “We gotta put on our Nudie suits.” So they drove home and changed clothes. Rawlings told the crowd, “We needed more sequins to make this night correct.” Then Welch added, “It's like you already had a big hot fudge sundae and somebody asks if you want a pickle.” When the pickle plays the perfection of songs like “That's the Way It Will Be,” “Make Me a Pallet on Your Floor,” “Elvis Presley Blues,” and “Red Clay Halo” … bring it! — KMc

Andrew Combs charmed a packed Mercy Lounge with his Glen Campbell-era throwback country sound as he presented songs from his fantastic 2015 album, All These Dreams, and previous releases in a more rough-and-tumble manner than on the records. “Please, Please, Please,” “Slow Road to Jesus,” “All These Dreams,” and “Suwannee County” were all outstanding, but Combs and company cut all the way loose on a fiery, showstopping rendition of “Bad Habits.” Good stuff. Really, really good stuff. — KMc