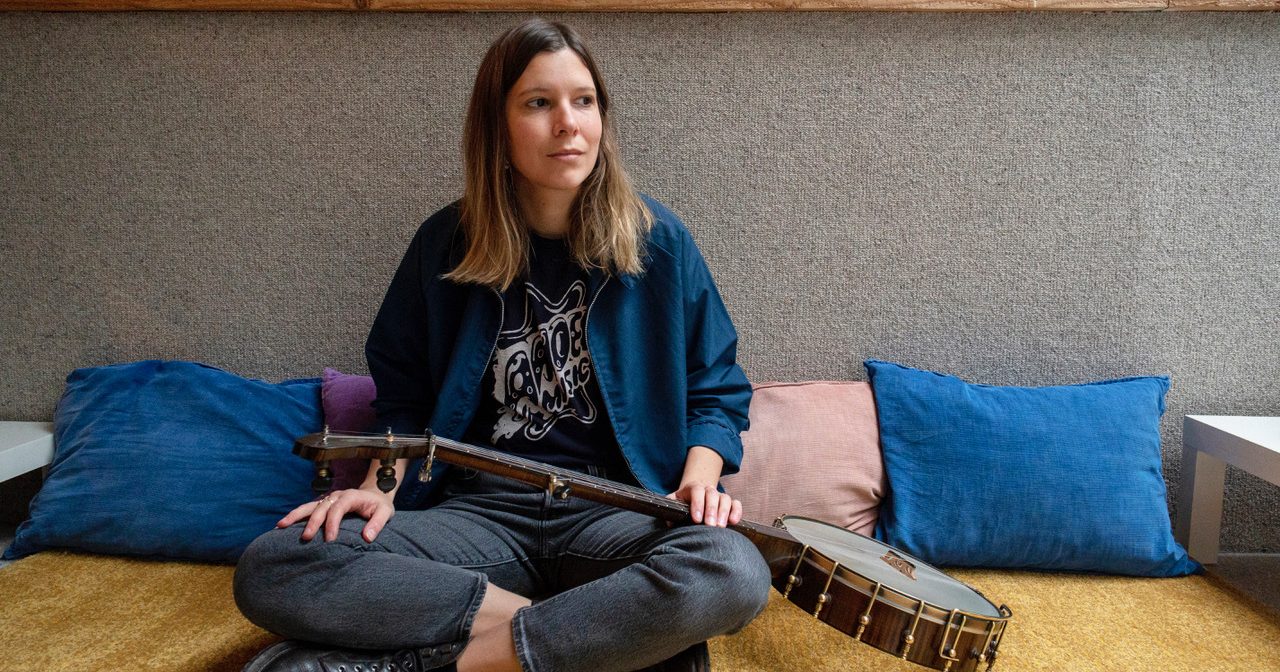 Editor’s note: Tunesday Tuesday is changing slightly in 2021. What began in 2017 as a bi-weekly tune feature and short review will now be expanded into a monthly roundup of interesting, engaging, and groundbreaking instrumental music and the themes we trace within it.

One of the most thoughtful and virtuosic clawhammer banjoists around, Allison de Groot (Molsky’s Mountain Drifters, The Goodbye Girls) has released a brand new video with fellow Canadian, guitarist Quinn Bachand. The two old-time musicians found themselves with free time hunkering down on British Columbia’s coast last fall and joined together on a gorgeous rendering of a couple of tunes — not rousing old-time or bluegrass fiddle melodies, though. Instead they chose a pair of Irish jigs: “Tom Billy” and “Trip to Athlone.”

“I love working up fiddle tunes outside of the American old-time repertoire,” de Groot relays via email. She arranges old-time and bluegrass with a striking, clean precision and unmatched rhythmic pocket for a frailing banjo player — facets of her playing style which might not seem to lend themselves to the often staccato or triplet-heavy or frenetic flurries of licks and trills in Irish music.

“When I’m playing in a new style,” she goes on, “I try to capture aspects of what makes the music special to my ear while still embracing the unique qualities of clawhammer banjo.” And on “Tom Billy” and “Trip to Athlone,” she does just that, impeccably so. De Groot is a player that at times can perfectly disappear into her source material, but her obvious embrace of clawhammer’s idiosyncrasies is what makes these Irish forays so entrancing.

“Adapting jigs to the five-string banjo is not a historically new endeavour, but there is lots of room to explore clawhammer banjo in this setting. I find a lot of freedom in that space!” That freedom is perhaps the most charming aspect of this set of tunes — second only to the joy always apparent in de Groot’s picking.

Though perceptibly rare, other banjo players have indeed been enticed by that very same freedom (de Groot is right that it’s not a new endeavor). The five-string banjo, especially post-Earl Scruggs, is an instrument with intrinsic qualities of innovation, acrobatics, and thinking outside the box. The physical instrument itself and the lore driving the mystique behind it lend it perfectly to Irish and Celtic folk music.

Ron Block, longtime member of Alison Krauss’s band, Union Station, and an award-winning multi-instrumentalist, has long been an acolyte of five-string Irish banjo. On a 2018 duo release with Irish songwriter and picker Damien O’Kane entitled Banjophony, the pair explore not just the mind-bending beauty created by a five-string banjo’s interpretations of traditional Irish musical vocabularies, but also the ways in which the five-string and four-string instruments bump into each other — often delightfully — in these contexts. The linear-laid-out four-string banjo and the more bouncy, melodic five-string each naturally settle into their roles in this dialogue, like old-time and bluegrass’s primordial band structure of fiddle and banjo, but with more aggression and dissonance — and a heavy dose of the stark sort of beauty that grows from the spine-tingling friction between such gregarious and bold instruments.

Irish music fully embraced the banjo — the four-string iteration of the instrument, most often tuned in fourths (C, G, D, A) — by the mid-twentieth century, closing a transatlantic feedback loop that began in Africa, landed the banjo’s precursors in the Americas brought by enslaved Africans, and then transported the instrument in its modern form back across the Atlantic to Ireland. This conclusion occurred after the four-string banjo (and any/all banjos with varying counts of strings) skyrocketed to the height of fame in America’s popular music of choice throughout the nineteenth century: minstrelsy.

Its punchy volume, its bubbly, single-string triplets, the low buzzing of the wound strings were each folded into the greater sound of Irish folk so naturally, from the purest traditional instances to the most daring punk affectations. The banjo’s subversive, trailblazing tendencies are ripe for exciting forays and experiments. One such experiment is banjo player, builder, and inventor Tom Saffell’s behemoth Infinity 8-String Banjo.

In this 2007 video with acoustic Irish-bluegrass band Plaidgrass, Saffell demonstrates how the Infinity 8-String Banjo combines Irish banjo approaches on both four-string and five-string instruments. The two lower, wound strings, while droning or being picked, round out the natural high-end of five-string banjos, bringing in some of the punch and gravel we know and love in Irish banjo. Meanwhile, the higher strings — with one additional above the typical D first string — equip Saffell to efficiently execute Irish turns of phrase with a simple bluegrass roll of the right hand.

Whatever it is about Irish banjo playing that just works, these pickers demonstrate there’s an entire world to be discovered not just in other genres that may be seen as outside of the norm for our instruments, but even more so in the space created between those genres. That’s as close to a definition of American roots music as we might get, the “melting pot” quality we all know and love, evident and flamboyant in each of these examples of Irish banjo on more than four strings.