Traveler: Your Guide to Taos 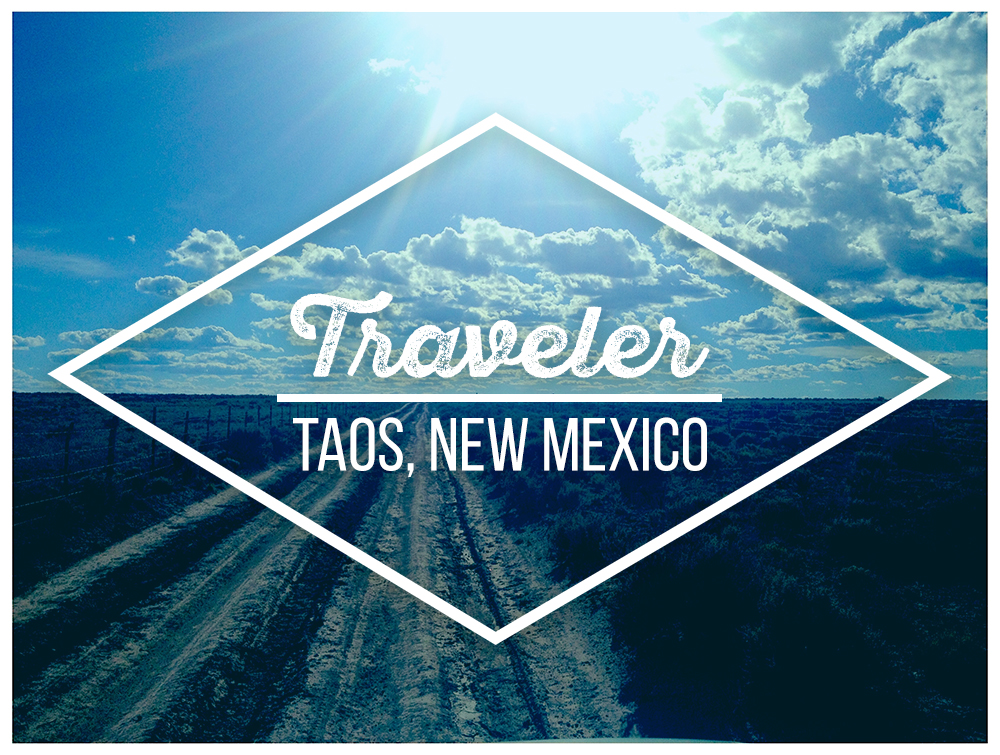 Taos, New Mexico is 135 miles north of Albuquerque, and 6,967 feet above sea level. Bordered to the west by the Rio Grande and the Sangre de Cristo Mountain range to the east, Taos is blanketed by the widest sky, with the biggest sun, brightest moon and stars ever.

Getting to Taos is a commitment — especially the last 36 miles … on a two-lane road … winding up the canyon beside the river. Once you reach the crest of the canyon, the plateau, the Rio Grande Gorge, and the mountains form a vista that causes a catch in your breath. Is it any wonder that the place has been an inspiration to artists and writers since the valley was first inhabited? 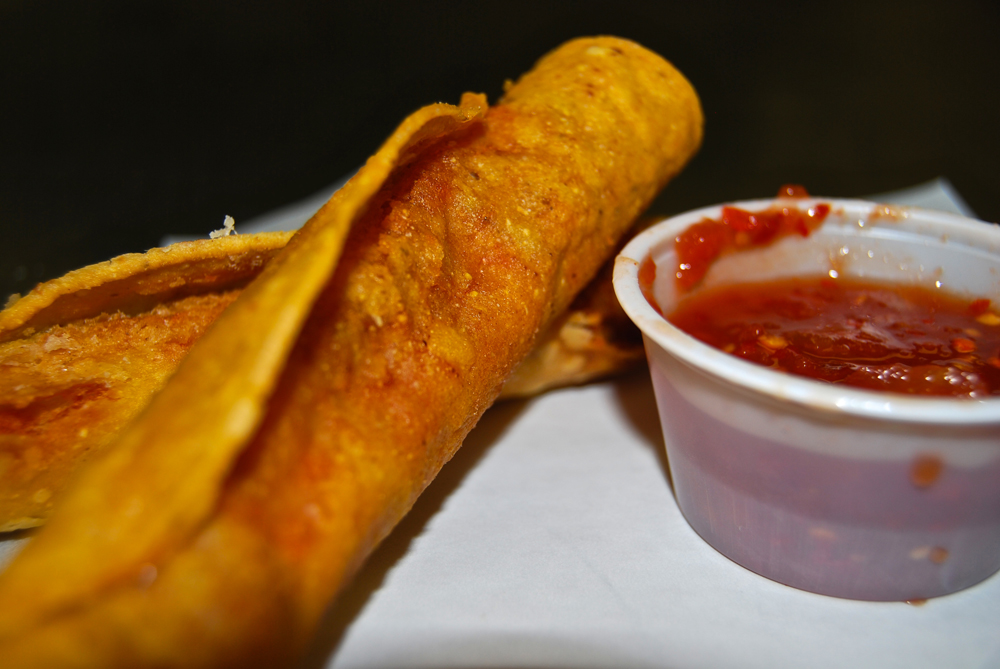 Most people fly into the Albuquerque Sunport and drive north on I25 connecting to US 285 through Española — a route known as the “Low Road.” This is the most direct route and will take you about two hours and 20 minutes without stops. But you will find places you want to stop, depending on the season. Velarde is the village right at the base of the canyon. A fruit growing community, Velarde is loaded with roadside fruit stands in the Fall. But, for a winter snack, stop at Mike’s Mini-Mart on the right hand side as you enter the village and grab a couple of taquitos — homemade fast food at its finest. Taquitos in hand, turn into the narrow canyon and head up to Taos. It’s impossible to get lost. The river is on your left and rock cliffs on your right. Just point north and go. 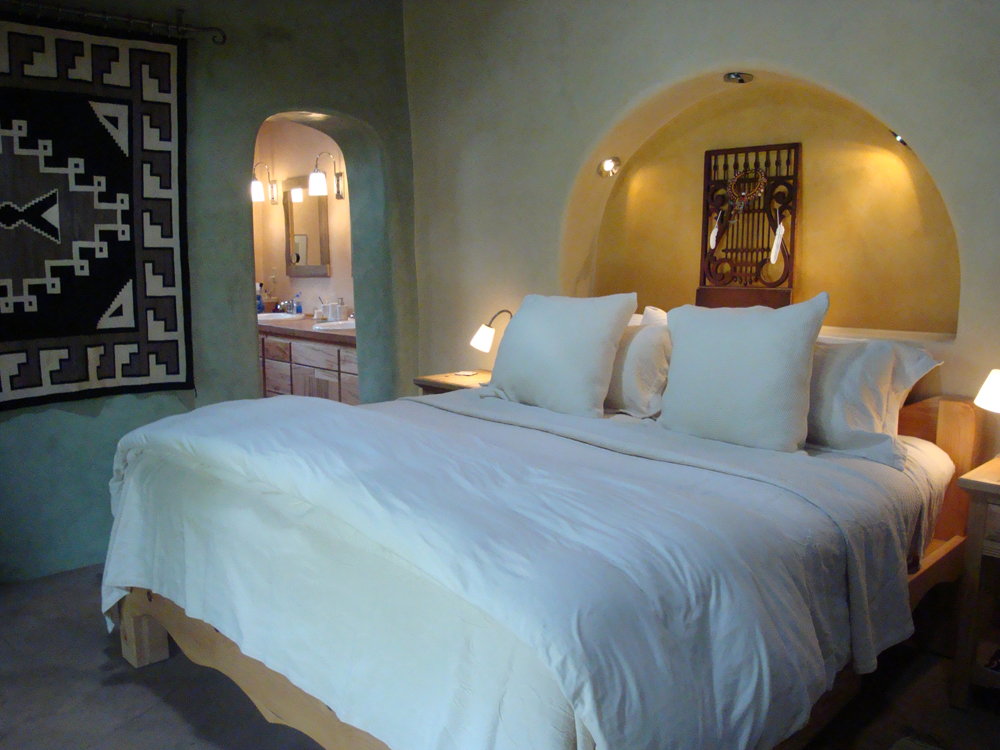 A room at Casa Betita

More and more people are discovering that Taos is much more than a day trip from Santa Fe and are choosing to stay for more extended exploration. Perhaps the most special place to stay is Casa Gallina B & B just a bit southwest of Taos Plaza. As a certified introvert, I don’t generally opt for the traditional B&B experience given the demand for interaction and challenged privacy, but Casa Gallina is anything but traditional. Every room is different, private, and lovingly appointed. The attention to detail is unparalleled; Richard and Matt, the hosts, are warm and generous; the vistas are gorgeous; and the eggs — the gallina in Casa Gallina — are fresh.

If you want to pretend you live in Taos, try Casa Betita, a fully restored 100-year-old adobe home under the shade of one of the oldest Willow trees in the valley. Casa Betita offers the finest elements of the 21st century with the charm, colors, textures, and décor of true New Mexico, including hand-plastered walls, Kiva fireplaces, vintage rugs, and the artwork of local artists. To stay right in the palm of art and literary history, stay at the Mabel Dodge Luhan House — it's more of a retreat-style hotel and a pleasant walk from Taos Plaza. 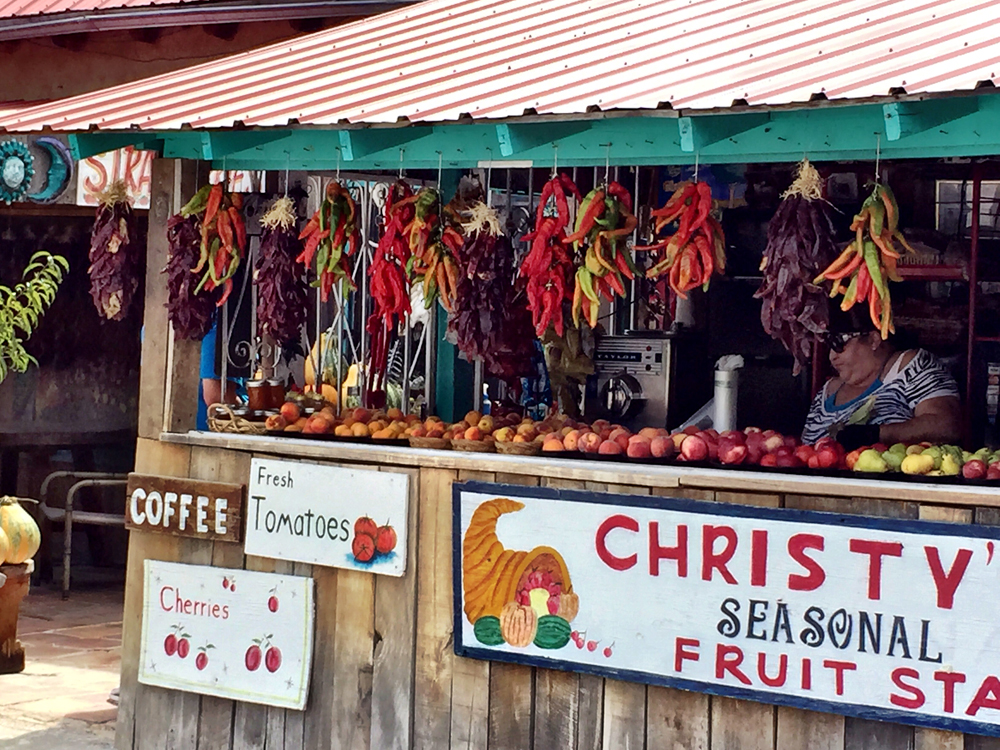 Join the regulars for coffee and a delicious cardamom coffee cake at World Cup — a postage stamp-sized coffee bar on the corner of Taos Plaza. Perch on one of the few barstools or share a step and a bench outside to catch up on all the “news” or just ponder the sky. A little further north on the main drag, you will find two other local favorites for caffeine — the Coffee Spot and Elevation.

My favorite breakfast spot is Michael’s Kitchen Coffee Shop and Bakery, a family-owned gathering spot for locals and visitors alike. The atmosphere reminds me of many places from my childhood: Western, rustic, friendly, and just plain good. Everything is plentiful, old school, and made from scratch. My go-to dish is huevos rancheros with green chile and a sopaipilla with honey. Another favored spot is the Taos Diner. It's a diner through and through — nothing fancy, just simple good food. 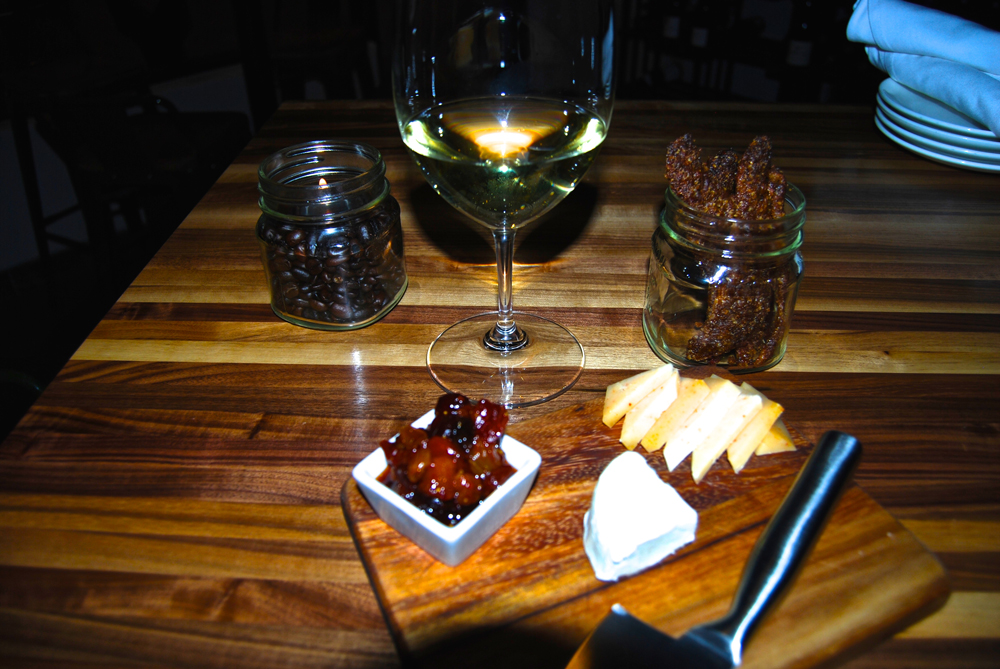 Cheese and bacon at Parcht

New Mexico is known for its cuisine, blending Native American and Hispanic influences and traditions. Taos holds high the traditions with an emphasis on red and green chile and locally sourced ingredients. Most of the restaurant offerings through town reflect the agricultural and farming nature of the community. El Taoseńo has some of the best northern New Mexico food in town.

Head to El Meze for a special night out. Everything is beautifully prepared, regionally sourced, and inspired. The chicharrones are a shared plate you won’t want to share. The grilled romaine salad could quickly become a craving, and the prepared-to-order mini-cardamom doughnuts served with a caramel chocolate sauce are divine. Try also Aceq and Sabroso — both a little farther north in the village of Arroyo Seco. The former has a lovely wine list, and the latter makes the best fresh-squeezed lime margaritas. 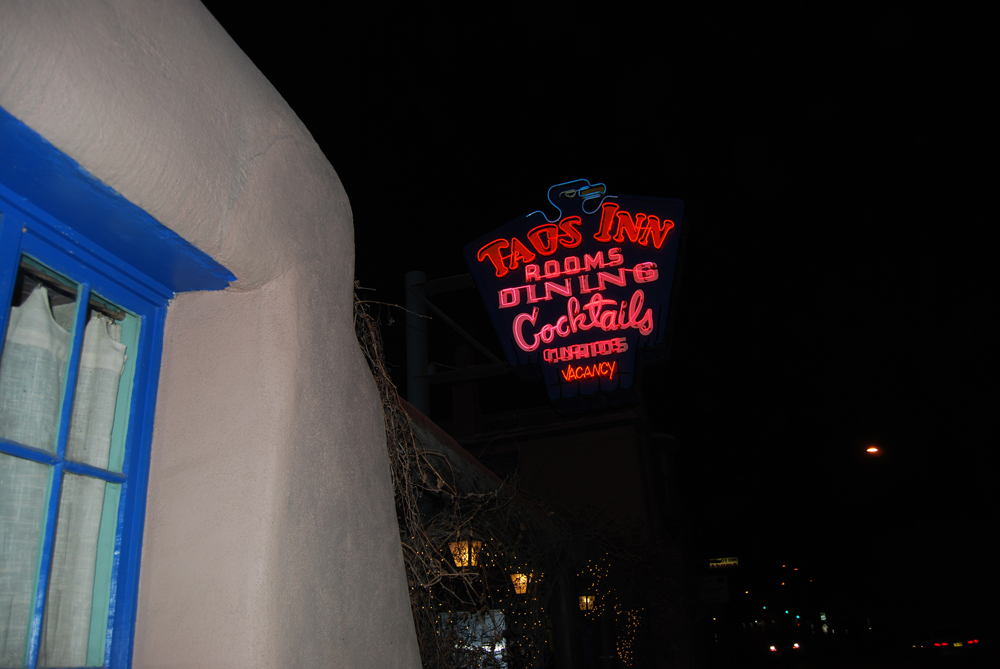 Speaking of drink … Taos does drinking establishments up right, and most of them present live music. Every day of the week, there are several live music offerings to choose from — be it local bands, up-and-coming “touring in the van” bands, or known headliners. There are brewpubs aplenty — Taos Ale House, Eske’s Brew Pub, and the Taos Mesa Brewery, which is also one of the main music venues in town with an affiliated radio station that has a fantastic Juke Joint Series for seven bucks.

Madisen Ward and Mama Bear recently played a lively show at the KTAOS Solar Center. The Adobe Bar at the Taos Inn, otherwise known as the living room of Taos, has live music every night of the week, every day of the year. In recent months, Lucinda Williams, Mary Gauthier, Tinariwan, and Los Lobos have all come through town. Suffice it to say, music in Taos is plentiful and eclectic. By far, my favorite discovery is the recently opened Parcht Bottleshop + Bites, an intimate wine bar hidden away on the east side of Taos Plaza. The proprietors, Nicolette and Hunter, have created a convivial atmosphere punctuated by a wonderful selection of wines by the glass and the bottle, a cheese named Purple Haze, and spicy caramelized bacon — the perfect adult clubhouse. 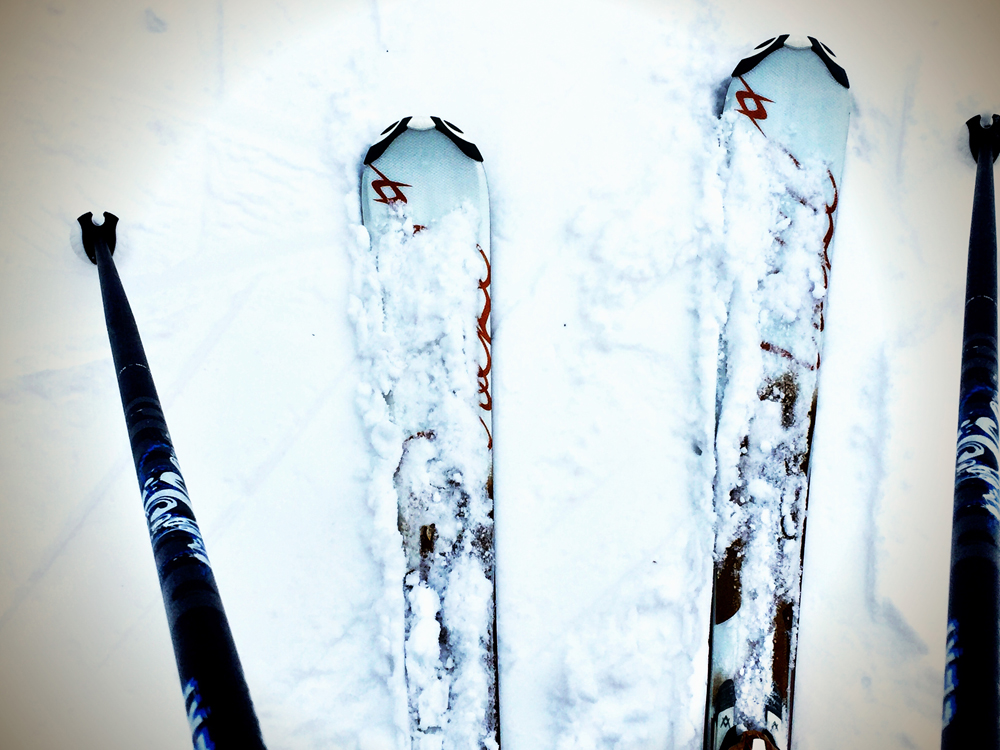 There is so much more to Taos than food and drink. The natural beauty of the place means that outdoor activities are paramount and determined by the season — world class skiing at Taos Ski Valley in the Winter; Class 3 rapids through the Taos Box in the Spring; hiking, biking, horseback riding, fishing, and camping in the Summer. Taos is rather untamed and, as such, has attracted the wild, the eccentric, and the unconventional … musicians, artists, writers, freethinkers, and soapbox preachers.

The Paseo — a street festival of installation, performance and projection art.

The Harwood Museum — most especially for the Agnes Martin Gallery where you can take a yoga class on Wednesday mornings.

The Bavarian — the sun-soaked deck is, by far, my favorite resting spot while skiing with stunning scenery at the base of Kachina Peak, best enjoyed with a mug of hot mulled wine.

All photos by Melissa Howden