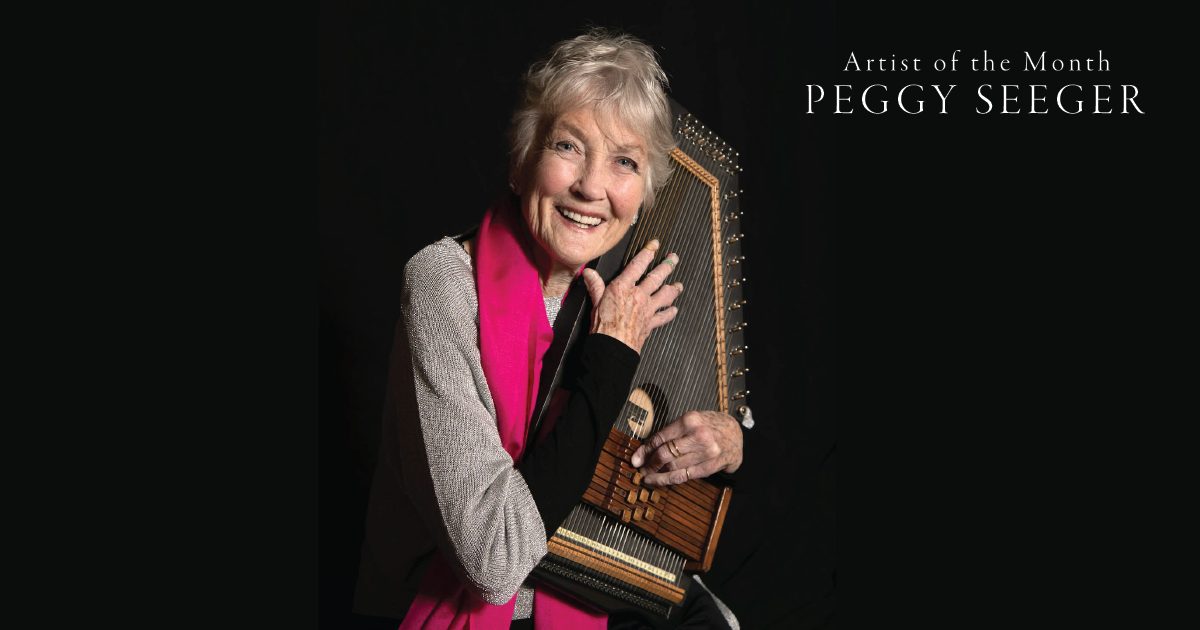 At 85 years old, Peggy Seeger stands as one of the most accomplished figures in folk music. She has recorded 25 solo albums, plus dozens more with her late husband, Ewan MacColl, along with collaborations with her siblings and generations of other folk musicians. She is a multi-instrumentalist who has edited and compiled folk music anthologies, and she ran a well-known magazine featuring contemporary songs for 20 years. All that while touring, writing more than 200 songs, raising three children and serving as an immoveable force for peace and human rights. And hers was the face that inspired MacColl to write “The First Time Ever I Saw Your Face.”

From her home in England, Seeger spoke to BGS about her new album, First Farewell, and what that title really means.

(Editor’s Note: Read the first of our two-part Artist of the Month interview with Peggy Seeger.)

BGS: You wrote “How I Long for Peace” 20 years ago, but it’s really appropriate now. Can you talk about it?

When we decided to make a new CD, my son Calum had me sing to him any song that I hadn’t recorded. Because I lived in the United States for 16 years and wasn’t touring England, I wrote quite a number of songs that my kids never heard. “How I Long for Peace” was one of those. And when Calum heard it, he loved it. So, it went on the album, and so many people are commenting on it. It’s kind of like a hymn, and it has a very singable chorus, and it ties up nations and politics with climate change and the plunder of the planet. When I sing it, I feel such a longing in my heart. I feel the violence of the world. We’ve just had a horrendous murder here. In this country, a young girl who was walking home by herself disappeared. She was found two counties away in a woods. And there’s been a tremendous uprising here on the part of women. But it’s not until men uprise against this that it’ll ever be changed.

Can you talk about the project’s title, First Farewell?

I remember my brother Mike, who was with New Lost City Ramblers — once they broke up they had an annual farewell concert every year. I thought that was marvelously funny. So, I thought First Farewell will make people think. But it’s based on the two farewells that you give at the airport. You know, if you stay to wave goodbye to the person at our airport, you hug, and then they go through where only passengers are allowed. And they walk about 40 yards away, and then they turn to the right. So, the first farewell is the hug, and there is a second farewell where they wave goodbye just before they turn that corner.

In lots of ways at my age, I’m saying farewell to a lot of things, almost daily. When you’re my age, you see your body doing this, doing that, and you feel you’re slowly decaying. And it gives you a new feeling of togetherness with nature. I really have more of an attachment to nature and the birds and the daffodils and the trees than ever I did before. And I’m doing a lot of listening to books about nature. I’m beginning to feel that humanity is this very, very powerful paper-thin sandwich filling between what happens above the earth and below the earth, and we are just this kind of bacteria that is sitting along the edge of the earth. [Laughs]

Because I do feel that nature is calling us. Nature realizes that we are a danger. The same way as we’re trying to get rid of COVID, nature’s trying to get rid of us. And power to her if that’s her best way of teaching us anything, because we don’t learn at all. We just repeat everything that we’ve done before. But the first farewell is the recognition that I am near the goalpost. And within sight of the goalpost. I’ve been running like hell. But I run more slowly now.

Why did you move back to the United States in 2006, and then why did you return to Great Britain?

A tumultuous love affair brought me here permanently in 1959. I became a British subject in 1959 and settled down here. After Ewan MacColl died, 30 years ago, I had a new partner, a woman, my best friend, the only person that I’ve been head over heels in love with. And after four or five years, I had an incredible urge to go to America to find out who I had been before I came here – because I was a child when I moved here. And I immediately became totally involved in England. I grew up in England from age 24 and 54. That’s when I really became an adult. (I shouldn’t say that, because I’m not an adult yet.)

In 1994, I got this terrific urge to go back to America. I wanted my partner to come with me, but she couldn’t. So, I said, I’ll go and see what it’s like. It was the first time I’d lived on my own ever in my life. I toured America endlessly for 16 years. Then I began to realize that I really, really, really missed my kids. So, I just felt that urge to come back here. And now that I’m back here, I’m so glad I came back.

My children live in three corners of London. I can reach any of them in two hours. We talk on the phone, and I’m part of my family that I created again. My American family is very big, but very scattered. And the ones that I was really attached to are all gone. So, what made me move back was a gut feeling of where I belonged. And it’s so wonderful that my children are helping. They’re making it possible for me to keep going.

What do you see as the bright spots in today’s political and social movements? What gives you hope?

I live in an old village called Iffley. Its church was built in the 1100s. And since 1964, 16 of its green spaces have been sequestered for housing. Plunk, they put 20 houses here; plunk, they put 50 houses there. Well, there are four acres left, two ancient fields that have not been touched for 1000 years. And our council wants to put 50 houses on them. I’m part of a group that is acting out of incandescent rage at this. If the housing is put in, it will be the end of our village – the end of it. I’ve always tried to be part of a small group that does something locally.

I’d like to thank you for the attention you gave to Laurie Lewis, because she is so good. She’s wonderful. I love that kind of music. I really, really do. And it’s something that I really miss over here, joining in on the radio with all of that wonderful singing that you can sing along with. I do miss the whole American scene, I do. But I’m a Gemini and I’ve chosen one of my twins, so I live here.

What I would like to say is that I have been very privileged in my life, extremely privileged, unlike a lot of people who need to struggle to make their names recognized. My name was recognizable due to my brother Pete, and my mother, my father. And I came at the end of other musicians who had smoothed the path out for me. I have had every possible advantage: two wonderful life partners, both of whom contributed to my career, and who have pushed me on and helped me. And children who don’t hate me! [Laughs] And a country that I kind of understand.

And enough money that I’m not in need in my old age. “First Time Ever I Saw Your Face” brings in a reasonable amount of income. People still hear it all over the place with some very funny covers. Oh, my god, it’s been covered over 400 times that we know of. There’s a rap version. There’s a country and western version. There’s a gospel version. There’s what I call a barbeque quartets version. There’s one with Scruggs banjo on it. I am just so fortunate, and I’m thankful that I’m being given an old age that makes me visible and worthwhile.

(Editor’s Note: Read the first of our two-part Artist of the Month interview with Peggy Seeger.)