Turn Up the Radio: A Conversation with Woody Platt of Steep Canyon Rangers 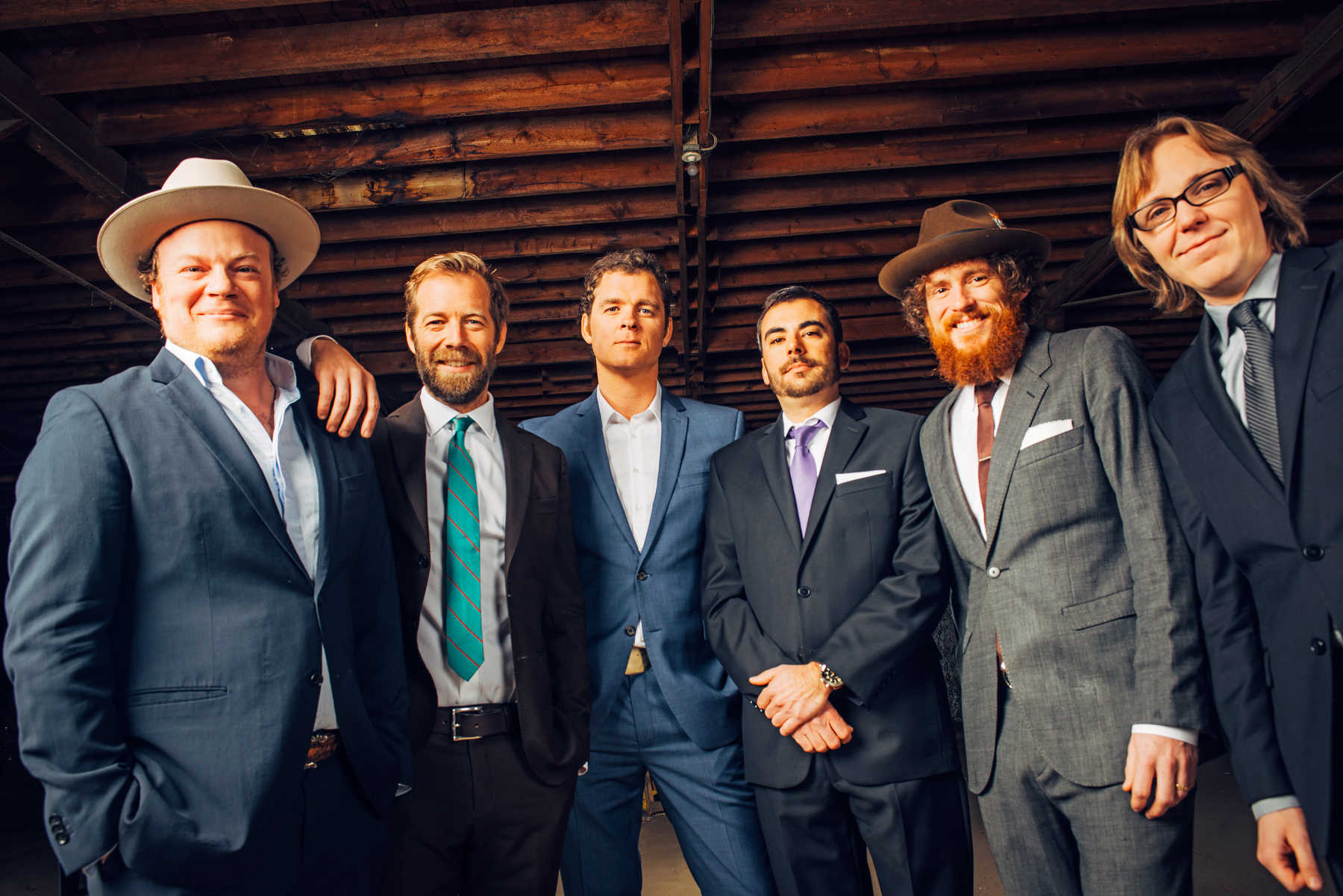 One of our favorite bands is Steep Canyon Rangers, the North Carolina complement of bluegrass boys who’ve spent the last 15 years winning our affections with magical songs and superior playing. Their saga continues this month as they tour the country behind their new album, Radio. Lead singer and guitarist Woody Platt dialed us up from a hotel room in Colorado to chat about what went into making their newest release.

I enjoy learning about what goes on behind the scenes when a band makes a record. So let’s start by talking about the songwriting process. You’re all involved in the songwriting, right?

We are. We have a “whole band” approach to writing our songs. Typically, the bulk of our material starts with Graham [Sharp] and Charles [Humphrey], the band’s banjo and bass players. They’re constantly writing songs. We can be in the studio making a record and they’ll be writing a song for the next record. So, we’ve had a lot of material for this album kickin’ around since we made the previous record, Tell the Ones I Love [in 2013]. Usually, it works out to where half the songs are already together — we’ve been performing them and shaping them and seeing how they work with a live audience — and then the other half take shape and come to life in the studio.

I’d say that, if we have an 11- or 12-song record, typically we might show up with 20 “candidates.” We like the producer to have a clean slate. He doesn't need to know who’s written what song, so there’s no personal interest attached to anything as we approach a record. There’s always the obvious batch that everyone loves, the ones we start with. And then, when we’re rounding the record out, we select from the remaining songs based on what the record needs, to kind of fill out the puzzle at the end. And we appreciate a producer’s input, helping us narrow songs down.

I was going to ask if you decided on the songs before you met with Jerry [Douglas, the album’s producer] or after things got rolling. You read my mind and pretty much answered the question.

Yeah, it’s kind of done throughout. There are the obvious ones that everyone knows should be included and then you round it out.

But, the actual songwriting process is really cool. Usually Graham and Charles present a song to us individually. If it’s something I might sing, they might come to me with a guitar and we’ll learn it. If it seems fitting, we’ll take it to the band. But, every member is involved and I really respect the writers for that. They don’t say, “This is the song. This is how it goes.” They say, “Here’s a song. What do you think?” We’ll try everything — different time signatures, different keys — and the songwriters are very open-minded and accepting of input. That makes the process enjoyable.

It also makes it challenging. As Jerry likes to say, “You turn over every rock.” He was the perfect producer for us at the perfect time. His connection to the tradition of bluegrass — you know, the Country Gentlemen — all the great traditional bluegrass players he learned from and played with. Combine that with his ability to stretch out the music and cross it into other genres, and he was perfect for us, especially since we’ve added percussion to our band. He was the perfect guy to help us stay rooted and explore at the same time.

That’s the key to a good producer … someone who can give you input on the songs and, at the same time, help shape the sound. When you talked about the sound of the record, the texture of it all, what kind of ideas did you throw around?

Well, there are so many things you can do in the studio. [Laughs] There are endless opportunities. For us, we wanted to pretty much capture something we could recreate on stage. We avoided doing a lot of layering, stuff that we can’t do on stage. We did use some delay and a few things that we haven’t used in the past, but those are things we can incorporate into our show. As far as the final soundstage, that was really Jerry’s doing. We trusted him so much. He mainly mixed it with the engineers and we just dropped in. He did a great job.

He really did. It blends the traditional elements of bluegrass but has a very rich, modern texture. A little bit of, dare I say it, “rock 'n' roll.” It’s a little bit beyond what a lot of traditonal bluegrass bands will do these days.

Yeah, we cut the drums, bass, and mandolin in one big cathedral type room. We got the drum sound really rich. Those three instruments are on each other's tracks. The rhythm section has a real room sound, a real live sound, because they’re all together.

That must be it. And I can hear it. It’s also a very light-hearted record and I like that.

We’ve been known to have darker records, thematically. But it’s cool you can hear that coming through on this one.

The first single, “Radio,” is a fun tune, name dropping Casey Kasem and all that. Why did you choose that as as the lead track?

Well, we’ve really been into that song since the first time it came around, since Graham showed it to us. Jerry jumped right on it; he immediately loved the track. It kind of strikes a chord with our generation … how we got music, how you had to chase down and catch it off the radio and try to catch it on a blank cassette. How different that is to how music is listened to today. It seems like a good time to have that throwback kind of thing, to remind our generation and people a little older how it used to be to listen to music.

It was exciting, a sense of anticipation sitting next to the radio …

… waiting for your song to come on and you’d jump on the button to record it. It was an entirely different world than what my kids experience. They want to hear a song? “Hello, Spotify.”

And then when you’re waiting to listen to a song, you’d hear a bunch of other songs you didn’t even know about. I feel like Spotify and all those other ways of listening to music are so popular right now that it’s a good time to remind people about the radio and other ways you can listen to music.

I like all the songs on the record, but the groove of “Simple Is Me” is pretty infectious, as they say.

It’s got a nice pocket to it. It’s kind of like “Stand And Deliver,” from our last album. It’s one of the songs that came up later in the process of making the record and it really stood out.

I think one of the misconceptions people have outside our little community is that bluegrass doesn’t have a groove. But then you go see any number of different bands — you guys … the McCourys are one that come to mind — and there’s no shortage of groove.

For us, we picked up a lot of groove when we got our percussionist because he’s got that kick drum. He’s really helped us catch a groove. We’ve always had something in the pocket, but it’s really been enhanced by him.

My other favorite is “Blue Velvet Rain.” But, then, I’m a sucker for a country waltz.

Yeah. [Laughs] Charles wrote that. It features a nice quartet vocal, which we’ve always liked to do and focused on. We used to do a lot of a cappella singing and we have the voices to do that stuff. It’s a nice tune; it’s gone over well at our shows.

I had the chance to talk with a friend of yours, James Griggs.

Are we hearing his guitars on this record?

Actually, no. I got one of his, but I didn’t play it one the record. My wife [Shannon Whitworth] has one of his guitars and she plays it all the time, every show. He’s a good builder and good friend.

You’re out on the road right now. I’m assuming all these songs are getting workouts.

They are. Gosh, I think nine or 10 of them are in the show. We did a show in Boulder in July and every song we played was from the record. We’re using “Blow Me Away” as a closer; putting “Simple Is Me” and “Radio” at the top of show. They’re all equally exciting right now because they’re all so fresh.