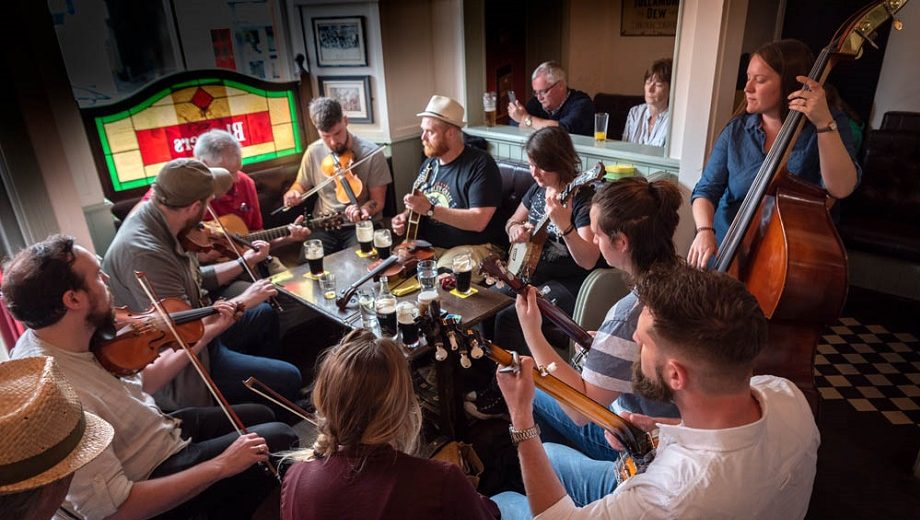 This summer, BGS UK is celebrating the festival makers – the men and women who put their time, their finances and their sanity on the line to bring us the music we love. For the past decade, Israeli-born Uri Kohen has been flying the flag for roots music in the west of Ireland with his Westport Folk and Bluegrass Festival in County Mayo. What started out as a labour of love has become an event that draws people back, year after year, from across the globe. We caught up with Uri to find out more.

BGS: Uri, describe your hometown of Westport for those of us who haven’t been there.

It’s beautiful! It was voted as Ireland’s best town to live in and we still very much hold that title. It’s particularly famous for the mountain overlooking the town, Croagh Patrick, where St. Patrick sat 40 days and nights and banished the snakes from Ireland. We’ve got some of the best restaurants in the country, and they recently built an entire cycle lane all the way round called the Greenway which brings people in droves to ride their bikes. Brilliant pubs, too.

But it’s not where you’re originally from.

No, I grew up in a kibbutz in the west of Israel.

Is there a bluegrass scene in Israel?

Not particularly. I’d never heard bluegrass before I came to Ireland. But in the 1970s an English couple moved to a kibbutz called Ginosar, and they started a festival called Jacob’s Ladder. It was focused on Anglo Saxon music, so there was English folk, Scottish ballads, and American folk too. There was even a massive scale square dance! They’re still running it and it’s a super cool festival. You do hear bluegrass instruments getting into Israeli music now – pop albums with banjo.

What were your musical influences, growing up there?

My parents were socialists so the music they listened to in their early 20s was real workers’ music. My dad had spent two years in the US so he was influenced by that; he researched Alan Lomax and was a big fan of Leadbelly! And of The Weavers, Johnny Cash, and Peter, Paul & Mary… Pete Seeger came to Israel in 1964 and my dad actually got to meet him. But when I started stealing my parents’ records I chose the Bob Dylan and the Leonard Cohen.

You mention that they were politically inspired by the folk artists. Was there a lot of music making on the kibbutz too?

Yes, but bear in mind that most of the people that lived in my kibbutz were immigrants from Eastern Europe, so at that time Israeli music was heavily influenced by Russian music, led by accordion, clarinet and fiddle. The accordion was the main instrument and it’s still very popular to do public singing there – people pay good money to go and sing along with someone who leads them in communal singing. My granddad, who came from Austria, had played in a mandolin orchestra when he lived there, and I have a picture of him doing that which is cool.

You didn’t want to be a musician yourself?

I couldn’t play so I became a sound technician, which is the Failed Musician Syndrome. I loved rock and roll, and even as a little kid I was DJ-ing for friends and at school parties. I didn’t have equipment – I just used to sit all night and tape the songs from the radio. The ability to shape people’s mood by playing them good tunes is something I love to this day. Then at 14 I joined a sound company in my local village and I became fascinated by speakers and microphones. I really learned my craft touring the former Soviet Union as a sound engineer for the Israeli army’s bands. We had to work with whatever equipment we found there, and it wasn’t much. 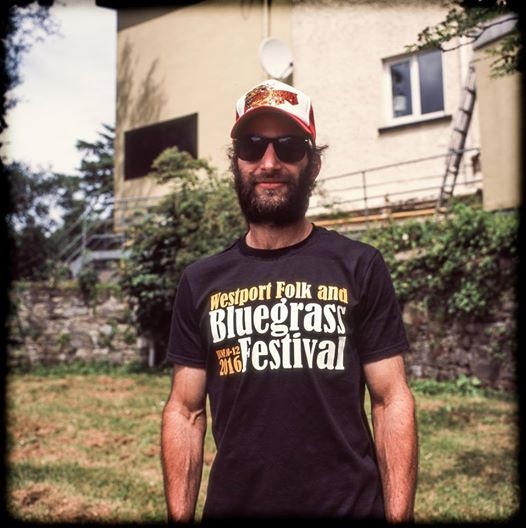 How did you end up moving to Ireland?

It was like an actual dream. I woke up one day when I was about 16 with this epiphany and told my parents I was moving to Ireland. I didn’t know much about Ireland at all but I was charmed by it. Once I had the idea it was where I wanted to be, I read books and watched films about it and as soon as I saw The Commitments I knew that’s the way I wanted to live my life. Own a pub, live in the countryside. So that’s what I did! I flew to Dublin on a one-way ticket. I’m sure my parents were upset about it, but then again, my father went to kibbutz which wasn’t what his parents raised him to do… They’d taught us to do our own thing and so in a way they were probably proud of it.

Westport seems like a pretty remote part of the country to end up in.

There was an Israeli man by the same name, Uri, who lived here, and I knew of him, and he’d said sure if you’re in Ireland come over for a look. I went down and stayed in his house for three weeks! Within a week or two I got a job in a pub, and about the same time I met Leesa — who is now my wife. I don’t believe in fate but still, I couldn’t believe I ended up here, and that everything just worked out so well.

So you moved to Ireland, knew nothing about bluegrass — and now you run the country’s biggest bluegrass festival. Explain.

Well, I’d been running pubs and I’d almost left music production behind. Then one year some friends asked me to help them put on a Kurt Cobain tribute night and suddenly we had 200 people and six bands, something this small rural town had never seen before. Until then we’d just had a local band called the Kit Kat Boys because they’d play two songs and have a cigarette break. It inspired this idea to really develop the music scene in the town with a strong emphasis on production values and quality acts.

Anyway, I had the idea of doing a festival in the style of The Band’s The Last Waltz. I was imagining music like the Grateful Dead, and then someone said, “Why not do it with bluegrass?” I said, “I don’t have a clue what bluegrass is, but let’s do it.” And the great thing about Ireland is that the bluegrass family here is so keen that they came in droves. I couldn’t believe it. I remember the campers arriving on Thursday… I was so confused. I said “We don’t start til tomorrow!”

What has running the festival taught you about Irish bluegrass?

First of all it is way bigger than what we think. Both from a musician’s perspective and a fan’s one. Second, you don’t need to be an expert to enjoy this stuff. When I came to this music Bill Monroe and Lester Flatt meant nothing to me. What’s important for the crowds is that the acts are good — not whether you play Kentucky-style or California-style.

Festivals are famously risky from a business point of view. Did you ever feel out of your depth?

In the second and third years I lost a lot of money because I was determined to book the best bands I could. But the response was amazing and it just grew and grew. I think I hit the jackpot choosing this style because these musicians want to play all the time. I brought the Loose Moose String Band from Liverpool and they almost played for 72 hours straight. And I’ve seen Tim Rogers — who’s the number one fiddler in Ireland and the managing director of the festival — once do a session for 11 hours solid.

Every night we have a gala concert but everything other gig is free and bluegrassers are so approachable that seasonal musicians who just have a fiddle lying in their house can come and join the sessions with the headline acts. It’s like playing on the street with Bruce Springsteen – when people see it for the first time they are blown away. For instance, in 2012 Roni Stoneman played an afternoon set, and there was a young feller, 13 years of age. Roni, in her 70s, plays “Dueling Banjos” with him. He returned to the festival year after year, and now he’s one of the most sought-after banjo players in the country. 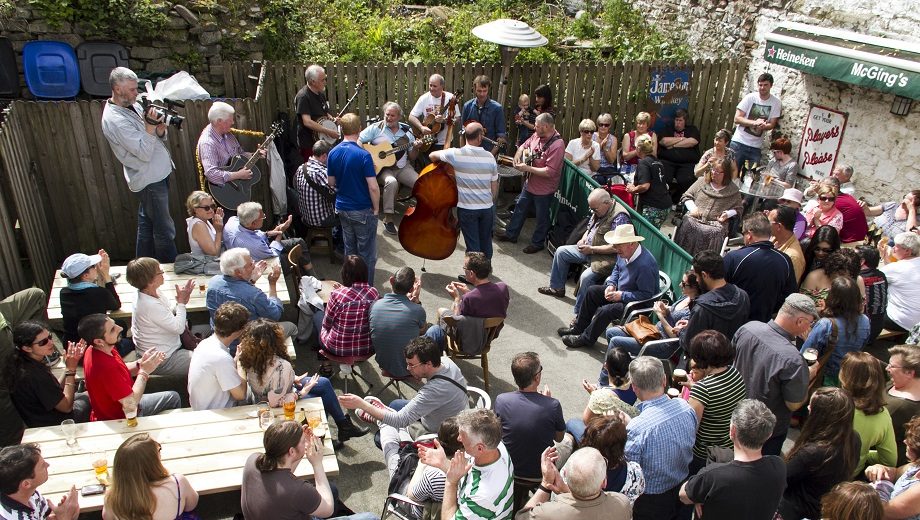 So who excites you in this year’s line-up?

Brennen Leigh and Noel McKay, a country folk duo from Austin, Texas, are going to close the main stage on Saturday night with some special guests. And I can’t wait to see The Local Honeys, a duo doing old-time music from East Kentucky, doing a gospel hour on the Sunday morning. We’re also bringing over a six-piece from Alaska called Big Chimney Barn Dance, and Blue Summit from California, with the brilliant AJ Lee. It’s their first-ever visit across the water! There’ll be sixteen different acts including bands from Paris and the Netherlands and of course Ireland and the UK.

Sounds like you’ve got the beginnings of your own Bluegrass Eurovision.

As I like to say, it takes an Israeli man to bring a French band to play traditional American music in Ireland. I truly believe in world peace through bluegrass! We have all the worlds’ problems sorted here.