Want to Write a Protest Song? Read This First 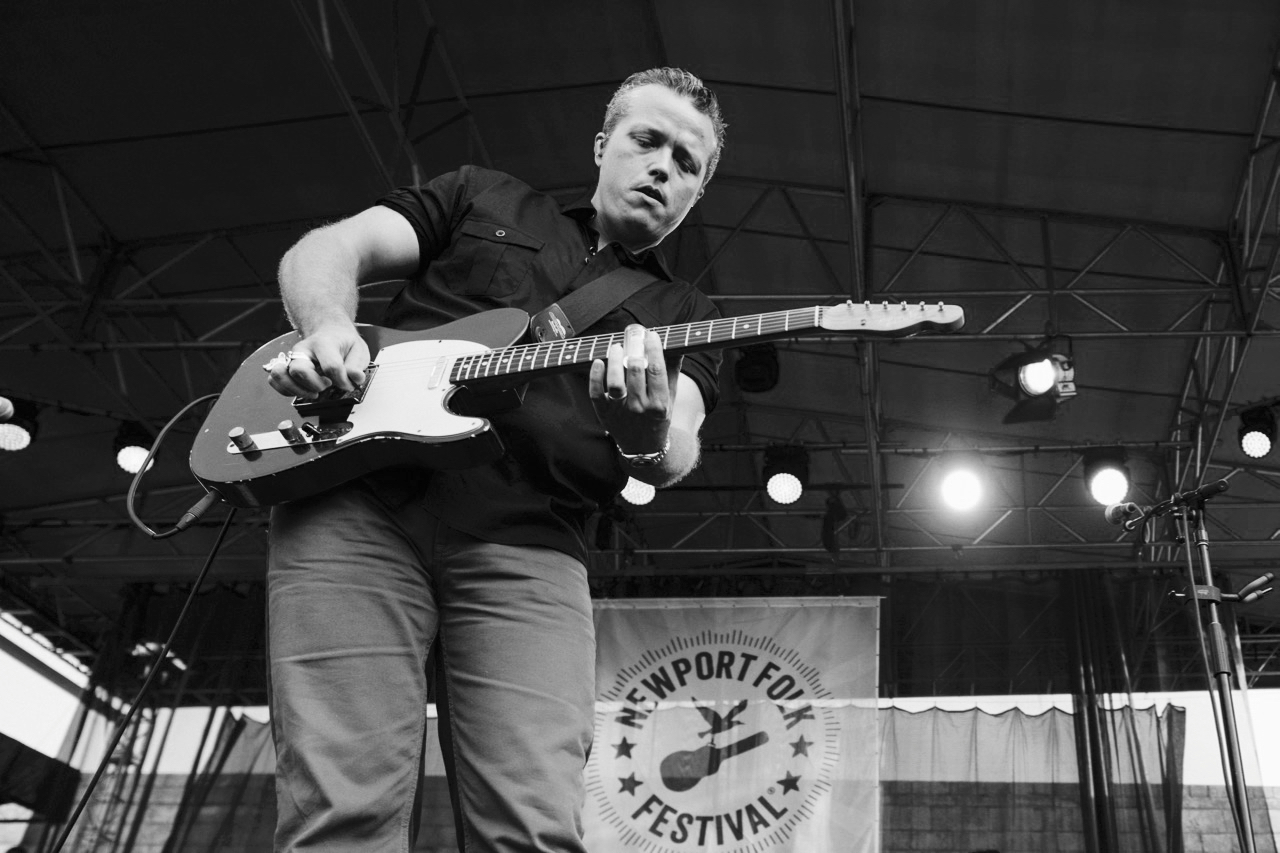 “There’s no such thing as someone else’s war
Your creature comforts aren’t the only things worth fighting for
Still breathing, it’s not too late
We’re all carrying one big burden, sharing one fate.”
— Jason Isbell, “White Man’s World”

If one musical phenomenon united the year 2018 from the very moment the ball dropped over Times Square, it was the protest song. The soundtrack of the resistance clearly had enough time to percolate, deliberate, and incubate since our 45th president’s administration began in January 2017, because protest emerged as a recurring theme.

In the summer of 2017, Americana speak-your-mind hero Jason Isbell may have been the earliest adopter with “White Man’s World,” where he was decrying his own privilege while championing our common humanity and our shared fate. A year later, string band virtuosos Punch Brothers went so far as to name the elephant in the room and describe him thusly on “Jumbo:” “Whoa, here comes Jumbo with a knife and a tan/ And an elephant’s tail for his Instagram/ Grown up brave on the fat of the land of the free…”

Falling in line with this common theme, in an interview earlier this year River Whyless’ drummer Alex Waters described their creative process for their latest album, Kindness, A Rebel, as grappling with the fact that, “it’s just hard to avoid the elephant in the room as far as the current political situation and feeling like we didn’t say or do enough.” Boston-based bluegrass outfit, the Lonely Heartstring Band, opted to protest by not protesting — a press release described their single, “The Other Side,” as, “a song that takes no sides, but encourages empathy and understanding for people regardless of political beliefs.” Korby Lenker and Nora Jane Struthers took that perspective directly to far-right cable television show, Huckabee, performing a co-written plea for the sanctity of the dinner table, “Let’s Just Have Supper.”

Several issues arise when you start to consider the commonalities between all of these songs, the coincidence of their releases, and the apparent level to which political mayhem must reach before the greater community sees these songs as necessary. Look, we’ve got at least two more years of this level of political division and discourse ahead of us. Before you sit down to write your scathing, politically-minded, resistance-inspired anthem perhaps consider these few questions and suggestions:

Is this your story to tell?

Story songs and character songs can be sensationally moving and evocative, and they’re an integral part of American roots music’s songwriting traditions, but writers should be careful not to simply co-opt and capitalize on stories, concepts, ideas, and experiences of a marginalized person or group of people. Try not to appropriate any identity or culture, especially if there are marginalized voices out there already telling these stories. Which leads us neatly to the next question:

Is a marginalized or underprivileged person already telling this story?

One of the best ways folks can utilize their privilege to support resistance and activism is to pointedly and intentionally step aside to let a marginalized person own their own stories, their truths, and to be able to speak to those stories and truths. Ask yourself if telling a certain story, especially someone else’s story, could deny someone else their agency. Use your privilege, whether it be simply tied to your identity or to your professional position, to bring in the voices of forgotten folks who are already telling these stories. Use their points of view to strengthen and reinforce yours, rather than assuming that, by taking on these stories of our own accord, we’re strengthening and reinforcing those who don’t have the access or advantages that we have.

Furthermore, is this song already written?

Consider how galvanized our intersectional movements can be if we draw upon all of our constituent strengths from each and every individual’s personal story. Think of the power of protest music from across the generations. If your song is “already written,” it doesn’t mean that your feelings and your convictions are invalid. It means you aren’t alone. Your goals are the goals of someone — perhaps many someones else. Sometimes you just don’t need to reinvent the wheel.

Stay away from rhetoric such as “we’re better than this,” “this is not who we are,” “we should go back to the way things used to be,” etc.

Ask yourself if the particular phenomenon you’re writing about is truly unprecedented and unique to this era. For instance, indigenous Americans’ experiences are erased if we allow ourselves to believe the narrative that this is the first time our country has detained and imprisoned thousands of children. What about decrying the travel ban on majority-Muslim countries? Not a new occurrence, either. Mourning innocent drone deaths? Those casualty numbers actually don’t neatly correlate to which party holds the White House, as one might assume.

Try to avoid opining for “normalcy” or to “go back to normal.”

As individuals from almost any marginalized people group in this country would be happy to report, there is not an “again” to which we can return the United States that would truly be best, better, or “great” for all Americans. Whether we’re talking about Native Americans, stolen African slaves, African Americans, Americans with disabilities, LGBTQ+ Americans, or women in America — none of these groups have ever enjoyed a period of time in this country that was truly, equally great for any or all of the above. Wishing for something that never existed, except perhaps to the most privileged Americans throughout history, is the self-fulfilling prophecy of erasure at work. There ain’t no such thing as the good ol’ days.

Consider your audience, but not too closely.

Are you writing a protest song knowing that the majority, if not the entirety, of your audience already agrees with you? If so, why? Landing ourselves in echo chambers of our own political and ideological views doesn’t actually do anyone any good. Are you writing the song as a pat on the back? However, having an audience that may diametrically oppose your personal beliefs doesn’t mean that any subject, any cause, or any identity, is yours to take on as your gauntlet. Keep in mind, the most relatable songs, especially politically-minded or motivated songs, are at their best when they’re truly personal.

Speak to your own experiences, unapologetically, and speak to others’ as they relate to yours. It’s called being human. But, don’t get too bogged down considering your audience, either. If you find yourself debating whether or not a song is right for a certain audience, it’s time for a privilege check. Is your anti-gun anthem the best fit for an audience in rural Montana? Maybe not. But consider the artists and songwriters out in the world whose identities are already politicized. The trans artist. The songwriter who uses a wheelchair. An artist of color.

There is no choice, when any of these artists come into the spotlight, of whether or not the political statement of their very existence is too much for their audience. If you are able to avoid a certain song or a political point of view for the convenience of potentially not offending someone, you have an ability that many artists do not possess. That should be in the front of your mind each time you take the stage to find an audience with which you might not feel totally comfortable. For some artists, every audience conjures that feeling. Directly in the face of their art.

Are you simply, innocently following a songwriting trend?

Nope. You’re complicit. Stop. If you’re writing a protest song simply because it’s “in,” something is very broken. (Not capitalism though. That would be very much in tact.)

Write what you feel. Write what pours out. Let it be personal, let it be real and vulnerable, let it process all of the confusing, complicated, and often treacherous peaks and valleys that we’ve all been crossing together these days. If you’ll stop and consider a few of these points listed above with kindness and empathy, and if you continue with only one metric against which you measure yourself, let it be this: that you are as true to yourself and your truth as you are careful and cautious with the selfhood and truths of others. Carry that with you and you almost can’t go wrong.

Isbell has it pretty much right. And he’ll be the first to admit that he wasn’t the first person to conceptualize the straightforward profundity in his lyrics. We really do all share a common fate–and our own creature comforts, however they’re provided to us, cannot be the only factors that we consider. It’s going to require active, progressive change, allyship realized as a verb, not a noun, to take what has begun as simply a quorum of protest songs from the past year and morph them into a true vehicle for change on the right side of history.

“I’m a white man living in a white man’s nation
I think the man upstairs must’a took a vacation
I still have faith, but I don’t know why
Maybe it’s the fire in my little girl’s eyes…”