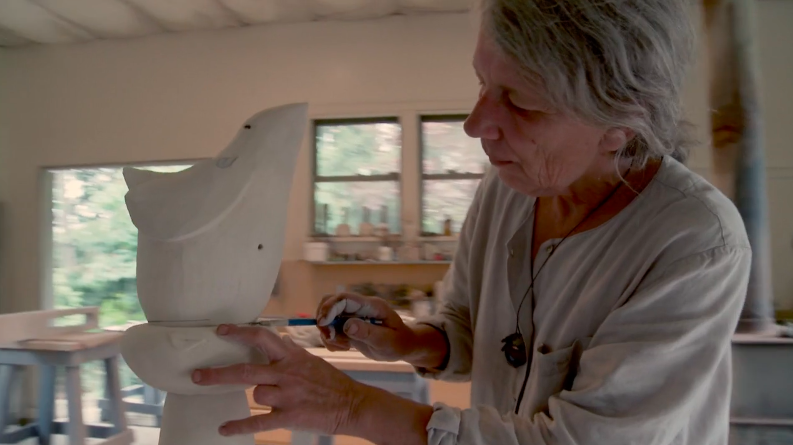 The following is the second in a four-part video series hosted in partnership with and created by Breakwater Studios. Each piece is part of a larger series, Life’s Work: Six Conversations with Makers, that chronicles the lives and artistic pursuits of makers living on Canada’s Eastern seaboard. Look for a new video each Tuesday.

All I do is beat on rocks. Before I did that, I studied recreation and I was a director of a boys and girls club. I loved it. It was as far as I could go by the time I was 24.

Well, I wouldn’t say I mastered. In the stone craft, to become a master, there are actually things you have to do. It’s your peers who tell you you are a master. You don’t decide that yourself, and you have to have taught, and you have to have successfully run your own business to be a master, as far as stone masons are concerned. I know people who have never done any of those things and they call themselves a master. It’s more, nowadays, if you’ve been here long enough, you can call yourself a master.

As far as mastering your craft, I will never master this craft. There is way too much to it. You could cut every single day of your life and never have experienced it at all.

With stone stuff, especially, because there are so many different things. If you go away from the artistic part, the sculptural part, and you get into the stone masonry part, as far as making, like, cathedral windows, I’ve done that but not all stonemasons are good enough to do that. They are very difficult. Or to do a spiral staircase: You may not, in your whole career, get to do that. It’s not so much the cutting; it’s being able to figure out how to do it. How to set it out. It’s the setting out. The geometrics of it all.

I was going to say my community couldn’t care less. I’ve brought notice to the craft in my community, as far as enriching my community, and I’ve inspired people to pick it up as a hobby craft. Actually, when I do my workshops, it’s pretty much 50/50 [in terms of women]. There are two women that I know of who do it more than a hobby. They work away at it, and I just got an email from a gentleman who took my course twice now, and he sent me pictures of his work and he’s really coming along. And now he wants to learn how to do lettering and I suggested he take my next workshop. [Laughs]

It’s great seeing someone progress like that. Takes me back to my boys club days. Same idea where, back then, you got to share enthusiasm with youth and, here, I get to share the enthusiasm of adults. It’s the same thing; it’s identical. They don’t squeal as much.

That I still have lots to learn. It’s frustrating when you want to do something, but you still haven’t got the skills to make your hands do what your head is thinking. I could make the same stuff over and over again and get really good at it, but I would be bored out of my mind. I have ideas and I have absolutely no skills to do them because I do work now that has stuff besides stone in them. So trying to figure out how to put the two together or how to make the stone do what I want it to do is challenging, but that’s why I keep doing it. I’d be bored out of my mind if it was the same thing every day.