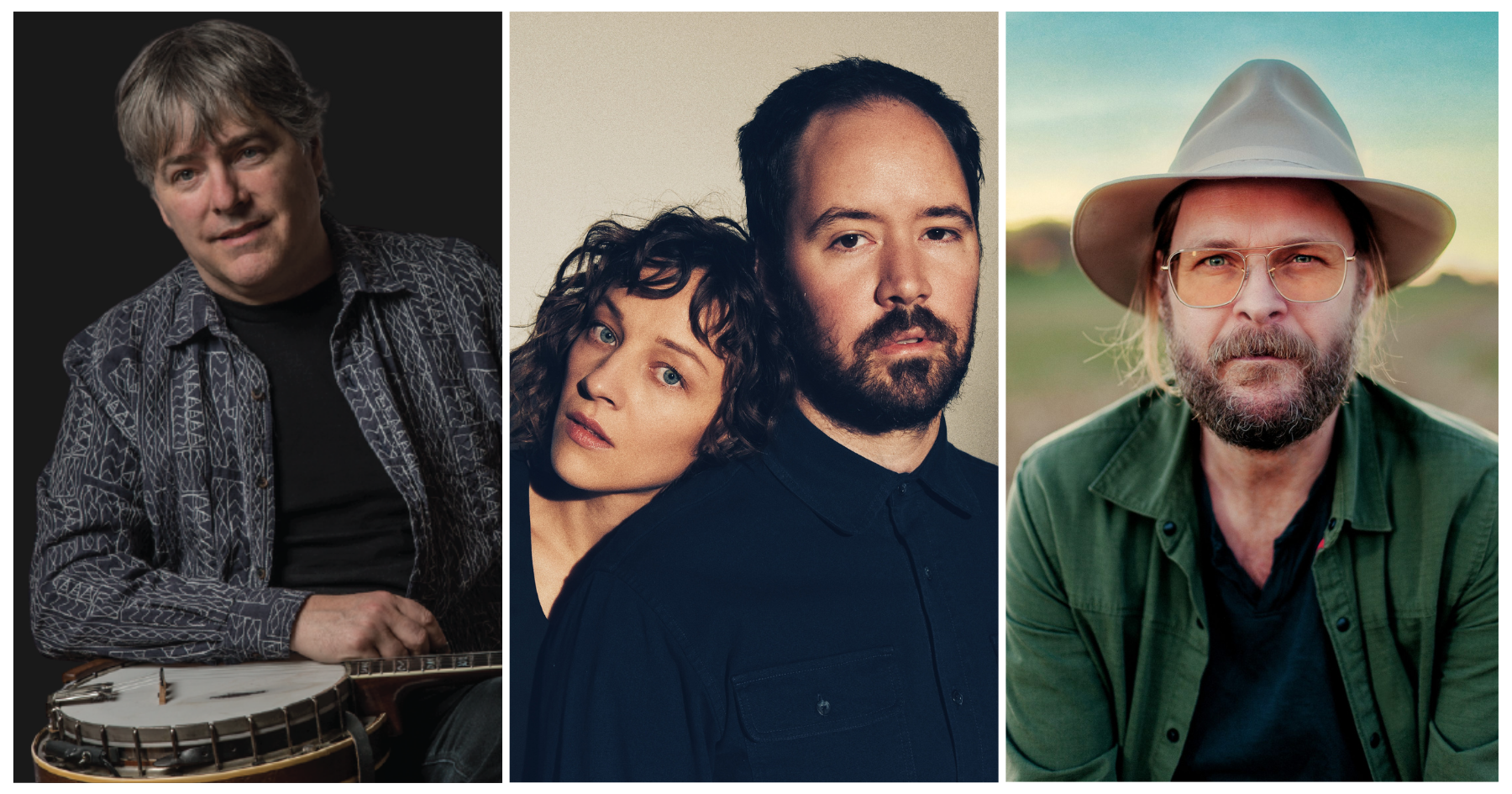 Welcome to the BGS Radio Hour! Since 2017, this weekly radio show and podcast has been a recap of all the great music, new and old, featured on the digital pages of BGS. This week we have a vertigo-inducing bluegrass whirlwind from our Artist of the Month Béla Fleck and an all-star lineup, we take a listen to some energetic and ethereal — yet totally traditional — bluegrass banjo from Jeremy Stephens, we dive into the latest from Watchhouse’s new release, and much more!

We’ve watched Andrew Marlin and Emily Frantz go through quite a few changes throughout their career in music, but one of the most joyful to watch has been their journey as parents. Even with COVID-19 halting touring for more than a year, their young daughter Ruby has already been to 34 U.S. states and nine different countries!

After their pandemic hiatus, the family of three is back on the road again as Watchhouse, the duo formerly known as Mandolin Orange, touring their new self-titled album. And Ruby, now a toddler, has perhaps transitioned back to road life even more smoothly than her father, who admits he’s still “struggling to find my sea legs.” For a recent Cover Story we spoke to Marlin about their name change, their new album, creativity through the pandemic, parenthood, and oh so much more.

Husband and wife duo Teddi & Bobby Cyrus are joined by Bobby’s cousin, Billy Ray Cyrus, on “Roll That Rock,” a grooving bluegrass gospel song that they wrote together. According to Billy Ray, “When I started singing ‘Roll That Rock’ my inner spirit said Bobby Cyrus will know exactly what to do with this. He did. He wrote the gospel truth and then sang the daylights out of it with Teddi and a killer bluegrass band reminiscent of Earl Scruggs and Bill Monroe.”

20 years since his last bluegrass album, Béla Fleck just returned this past week with My Bluegrass Heart . Home is where the heart is, after all! All September we’re celebrating Béla as our #ArtistOfTheMonth! Hear tracks from the new project — featuring an all-star lineup — and more on our Essentials Playlist, including this song featuring Sam Bush, Stuart Duncan, Bryan Sutton, and Edgar Meyer.

In this track with an R&B groove, Mississippi’s Paul Thorn turns the contents of a YouTube video of James Brown high on PCP into a song of redemption. Yes, you read that right! As he puts it, “It’s about being optimistic with whatever time you’ve got left.”

Elder Jack Ward – “The Way Is Already Made”

Elder Jack Ward puts his God-given talents to work on a new album that’s full of joyful gospel and sacred soul — as evidenced on its title track, “The Way Is Already Made.”

“If you’ve got that God-given gift you can do it — your choice if you want to sing rock ‘n’ roll, blues, gospel — but I choose the right side.”

“Maybelle” is a song that sounds like it came from deep within the mountains — exactly what The Grascals were looking for. From the haunting words to the clawhammer banjo and fiddle, “Maybelle” will grab your attention.

On a recent episode of The Show On The Road, host Z. Lupetin dials in to North Carolina to chat with Grammy-nominated songwriter MC Taylor, who for the last decade and a half has created heart-wrenchingly personal and subtly political music fronting Hiss Golden Messenger.

The Way Down Wanderers – “Everything’s Made out of Sand”

The Way Down Wanderers recorded “Everything’s Made Out of Sand” in one take, belting and stomping into one antique microphone. The song’s lyric, music, and sonic landscape all capture the inspiration they gathered from the temporary nature of all things.

Seth Mulder & Midnight Run recorded “Carolina Line” with an Osborne Brothers-inspired arrangement that represents many of their various musical influences.

In a recent edition of 5+5, Matthew Fowler spoke on the bold authenticity of Glen Hansard, a memorable birthday show in his hometown, Orlando, putting himself in the “hot seat” of a song, and much more.

The Felice Brothers chose the very first take of “To-Do List” as the keeper, capturing the loose, playful quality of the group just getting the tune under their fingers. “The song was originally a slow waltz with the lyrics: ‘Into the fire that burns them/that’s how the idiots run,’ but I didn’t know where to go from there. I had written down a to-do list on the adjacent page and began to sing it and it seemed to work well with the phrasing. I wrote down many pages of ridiculous things and chopped them up into the melody. This is how the song came into being.”

The lyrics of Mike Younger Music’s “Killing Time” take comfort in the remembrance of past friendships forged in the fire of struggle. Younger believes that artists have nothing to lose by speaking their truth and doing so unapologetically through song. “I greatly admire those writers and creative people in general, who, through their work, have lent their voices to the struggle for equity in our society, like John Lennon, Woody Guthrie, Bob Dylan, Joni Mitchell, Nina Simone, Marvin Gaye, Bob Marley, and others.”

Banjo player and multi-instrumentalist Jeremy Stephens (co-founder of High Fidelity) has an old school, traditional approach to bluegrass that’s anything but backward. His new solo album, How I Hear It, includes several instrumentals that demonstrate this fact. “Sockeye” captures the energy and ethereal quality of Stephens’ live playing in a way many more sterile bluegrass albums, and purposefully more modern sounding records, can only aspire to.