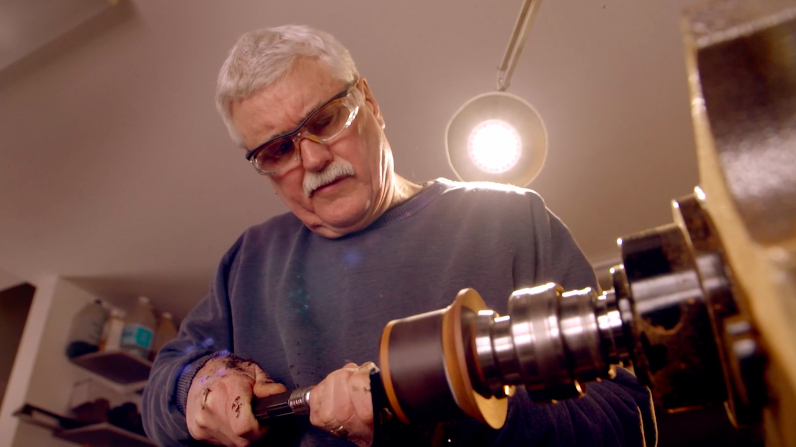 The following is the final video in a four-part series hosted in partnership with and created by Breakwater Studios. Each piece is part of a larger series, Life’s Work: Six Conversations with Makers, that chronicles the lives and artistic pursuits of makers living on Canada’s Eastern seaboard.

It’s been kind of always, really. I don’t really so much remember a beginning at all. I guess, if you really want to date it, it’s been [since] about 1974 or 1975. As a turner, I’ve always been immersed in woodworking in one way or another from childhood, really. I was excited to beginning turning, to make pieces for furniture which is what I started out doing.

I was a musician, prior to everything. I mean, I had been sharing my time as a turner with being a photographer. I still do it, but more emphasis has been on turning now. I was a musician back in the ’70s, so woodworking became a part of that because I made a lot of stage props and things at the time. English folk music. Button accordion.

That’s a tricky one. I’m not sure that you ever really … it depends whether you decide you’ve become a master or not. I never really feel I’ve ever got there, actually. As far as learning new skills, it wasn’t just a case of, “Oh yeah, I’ve gotta do this, this, and this.” It was a case of acquiring skills over a period of time, you know, making the usual mistakes. It wasn’t like I went off to school or did a course or anything like that because, in those days, there really was no such thing available anyway. It’s a continual growth. There are always aspects of it that you really still feel like you can improve on, I suppose. It’s an accumulation of skills built up over, really, a lifetime, to be fair.

Very little, actually. I’d like to think it was different, but if you look at the community as a worldwide community of woodturners, then I think I’ve made a contribution with my work for sure. I know that I’ve influenced a lot of people’s direction in what they’re doing, but as far as I would imagine, there are very few people that even know that I’m here. It’s really an artistic community rather than a community in Nova Scotia. It’s just too far out in nowhere, if you know what I mean. Culturally, it’s quite different from being in a bigger, larger city or whatever. Population’s low, agricultural-type community where art doesn’t really figure in most people’s lives. As a result of the Turns movie, it really opened up a community to me in a way. A lot of people related to that story.

There’s never an end to it; there’s always something else you want to go on to. I’ve learned a level of patience, I imagine. And knowing that it’s really a case of practice, practice, practice. Keep doing it, keep doing it, keep doing it. You know, it’s not really one of those things you can just jump in and jump out, really. Obviously, not everything turns out the way you want it to be, but being adaptable, as well, to see all possibilities in a situation. Maybe a thing didn’t work out, or how you find a way around a problem, as well. Problem-solving is a good answer to that, in a way. Constantly trying to work its way through the process by solving problems.