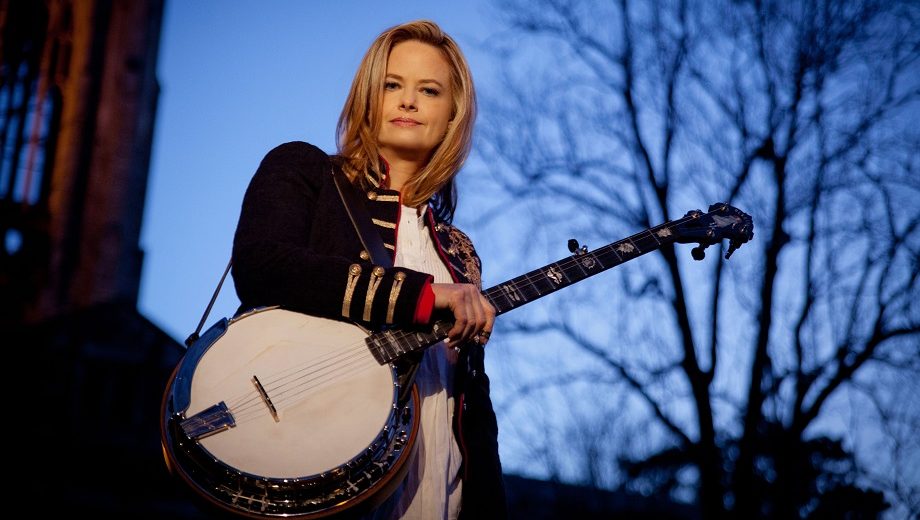 The first time Alison Brown gave a keynote address at IBMA’s annual conference in 2002, the bluegrass industry gathering was still held in Owensboro, Kentucky. So much has changed since then, but not everything. Asked about memories from those early conferences, she replies, “Oh, it was like it is now. I always kind of think of it as a family reunion. It was just a slightly smaller family then, but no less enthusiastic or supportive, as far as I’m concerned.”

Brown is one of bluegrass’ most prominent figures, adept as an artist, a producer, and co-founder of Compass Records. She’s also won a mantle of IBMA awards in multiple categories, including Banjo Player of the Year in 1991 and a Distinguished Achievement Award in 2015.

This year she will present a new keynote address, “Four and a Half Things I’ve Learned,” on Tuesday at IBMA’s World of Bluegrass in Raleigh, North Carolina. She spoke with BGS by phone.

BGS: What was it about this opportunity to present the keynote address that appealed to you?

AB: I was thinking about the fact that this is Compass Records’ 25th anniversary, and so I thought that, personally, it would give me an opportunity to reflect a little bit on where we’ve been and what we’ve learned in the process of doing what we’ve been doing over 25 years. And maybe share a few things with folks that could be edifying for them.

You’re seeing this bluegrass world as an artist and producer, as well as a business owner. What do you hope that the creative side of the bluegrass community will take away from your presentation?

Hmmm, maybe a better understanding of the landscape that we’re all trying to navigate. And how to better position yourself for success. I think some of the idiosyncrasies of the business, from the view of the record company — I wouldn’t expect that most creatives would be as immersed in that as we are, running a record label. And so I think if you know the challenges that you’re dealing with, you’re better able to position your music and your career to take advantage of the opportunities that do exist, and stand a better chance to succeeding.

What are some of the bluegrass community’s greatest strengths right now, do you think?

I really mean this — I think that we are incredibly fortunate to have an organization like IBMA that’s kind of the centerpiece of our community, that’s looking out for all of us and keeping the community together. I really think that’s incredibly valuable, even more than people know. Other roots music genres that don’t have that are not as fortunate as our community, in my opinion.

What are some things that the bluegrass community can really take pride in?

I gave the keynote address back in 2002, so this is actually my keynote redux. You know, looking back at that keynote, a lot of what that was about was embracing diversity, and musical diversity. That was 17 years ago and that was a rallying cry at that point in time, but it’s not like it was a revolutionary idea. I’m really proud of our community for the strides that we have made. Expanding the envelope conceptually, welcoming in people whose music may be more on the fringes of bluegrass, and not exactly emulate what Earl and Lester and Bill did in 1945.

So there’s the musical aspect, but there’s also the demographic diversity, like gender diversity and racial diversity. Those are things that are community is still grappling with — but we are grappling with them and I’m proud of us for that.

One thing I’ve noticed over the last 20 years in bluegrass is that the music videos are better, the websites and album covers are modern, and the band photos are more contemporary. How important are visuals, do you think, for a bluegrass artist to get attention from press, festivals, and audiences in general?

I think visuals are more important than they’ve ever been. It’s my experience that people can’t just listen to music anymore. They have to see music. We have people in the studio all the time and you want to play them a new track, and I can just see their eyes wandering around the room, looking for the screen. “Where do I look while I listen to this?” So, I think it’s more important than ever.

I’ve also noticed that some bluegrass labels are choosing not to put their new music on Spotify. Why is it important for Compass to be represented there?

That’s where the audience is moving. Granted, the traditional bluegrass music audience is slower to adopt a new technology than a more youthful pop audience would be, but still we’re seeing our audience move there and it’s a great place for people to discover new music. It’s one of the new revenue sources for selling music. We’re seeing the music industry move more and more into the streaming arena. It would seem to be crazy not to be there, as frustrating as the economics may be.

It hasn’t really been our experience that having bluegrass on Spotify has meant that we sell less bluegrass in physical form. And it only really supports the artists’ efforts because maybe the older audience is used to consuming physically but the young audience is used to consuming through streaming and digital. So if you’re not present in that space, you’re never going to expand your audience into that younger demographic, and obviously an artist needs to grow their audience. You need to keep trying to make the average age of your audience younger, rather than older, just in terms of your own longevity as an artist.

So many bluegrass musicians are friends with each other, as well as colleagues in a sense. In bluegrass, it’s pretty rare to send a business-related email to someone you don’t know. How do you think that familiarity shapes the business side of bluegrass?

I completely agree with you but I’m not really sure how to answer the question, though. I guess I can really only answer it personally — that that is part of what gives me a lot of joy, to be in the business of the bluegrass world, because this community has meant a tremendous amount to me personally. I’ve been in the bluegrass community since I was 12, which is crazy to think about, and there are people that I see at IBMA that I have known since I was 12 years old. I think about how much others have given me as I’ve come up in this music. So to be able to have a hand in making this music stay healthy, and paying it forward, is very meaningful to me.

Looking back, is there advice you wish you’d been given in 2002 that you had to learn the hard way?

That’s an excellent question. That’s probably something I should ponder for my keynote and see if I can come up with a good answer. I guess the one thing that I would say is, big things can happen in small steps. We’ve been pedaling this bike for 25 years, building this label, and it’s amazing to look back over a quarter of a century and see how something that you literally started at the kitchen table can grow into an entity that some would consider to be a significant force in bluegrass music. I mean, I think I might have known that going into it, so it’s not really a revelation. It just takes a long time, but if you continue to do the work to the best of your ability, over that long period of time, at the end you can stand back and you will have built something that is amazing to see, and that it did really happen.