With ‘Arm in Arm,’ Steep Canyon Rangers Give Everyone Time to Shine (Part 2 of 2) 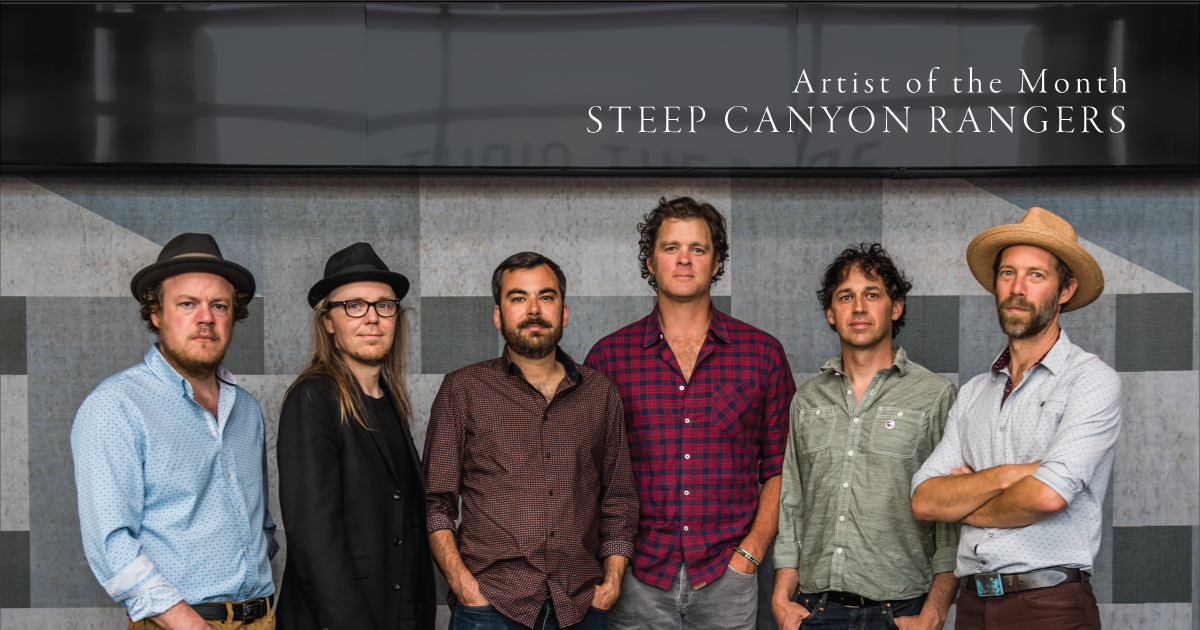 Steep Canyon Rangers’ Arm in Arm, their first collection of all-new material in two years, is a set of highly grown-up songs, some with storylines that you’d expect from the likes of Drive-By Truckers or Bruce Springsteen. It’s more loose-limbed and less traditional than past Rangers albums, with fine ensemble playing throughout.

BGS caught up with co-leaders Woody Platt and Graham Sharp in separate conversations leading up to the release of Arm in Arm. After starting with Platt yesterday, here is the conversation with Sharp.

BGS: With the band off the road, have you been able to do any songwriting during this time?

Sharp: I started off writing on a real tear the first few months. But then I slacked off a bit, in part because that coincided with me starting to make an album of my own. Switching from writing to recording slowed down that end of it, but working on my own stuff is kind of out of necessity. For the band to survive this and come back when it’s time, we’ve all got to look out for ourselves a little more.

It’s a strange new hustle, but we’re holding up pretty good. We’ve all been forced to sort of pivot, after having not stopped moving in 20 years. This is the longest any of us have stayed put that whole time. It takes a moment to settle, but it’s been eye-opening. Forced me into some new directions that have been good and ought to pay dividends once we can get the band back together. I’m trying to pull out as many silver linings as I can.

That’s a bit of news, about the solo album. What can you tell us about that?

I don’t know where or when it will ever come out, but the solo album is close to done. I’ve been working with Seth Kaufman from Floating Action in his little basement studio here in Black Mountain. It’s mostly new songs, and a handful of tunes the Rangers have been kicking around a while without getting to them. Nothing bluegrassy about it, mostly country to country-soul, because I have definite tendencies in that direction and a deep love for country music of the ’60s, ’70s, ’50s. That’s still among my favorites.

After Charles Humphreys III left the Rangers in 2017, this is the first album where you’ve written all the songs, not just most of them. Was there more pressure on you?

Not necessarily. It did not change my process much, anyway. I always just try to compile as much good material as I can. It is neat that with a band as organic as this one, a song can kick around for years where we’ll never find a place for it and then suddenly it’s revived. The last song on the album “Crystal Ship” was like that. I had that one for a long time and then backstage one day, [Mike] Ashworth just started playing that melody because he remembered it from a year or two earlier. It’s cool to have the band’s collective memory to draw on, where everybody is part of the process.

The first song “One Drop of Rain” is another. I probably wrote that one six or seven years ago and I’d just never taken the time to find the right groove and place for it. Then one night Woody and I were backstage, I had this little banjo roll, he had the phrasing to go with that and we put it together. A lot of songs come together over time like that. The process is more cumulative than me bringing something in, “Hey, I’ve got this new song.”

Do you have any particular favorite songs on this one?

Probably “One Drop of Rain” and “Honey on My Tongue,” for different reasons. I can remember exactly where I was and the situation I was trying to capture with “One Drop,” just shortly after my father-in-law had died very unexpectedly — 64 years old. What it gets at for me is, try to love your way through the hardest situations. And “Honey” is one I wrote with my daughter in mind. She was giving me a hard time, saying I never write songs for her — not true! But yeah, okay, that was written specifically for her. There are several songs about resilience, dealing with loss, setbacks. All to different degrees, tied to different moments in time.

This record sounds very, dare I say it, mature and grown up.

Well, we’re all passing into the point in our lives where we see a lot of past decisions come to fruition as everyone’s lives play out, our own as well as others. That perspective figures into it. As a songwriter, I’m maturing and trying to hone in on the emotional center of a song – and trying not to write about fluff. We were all very aware while making this album that a lot of the songs aren’t necessarily sad, but a little bit heavier.

And on this record, you’ve also got the first lead vocal from new bassist Barrett Smith.

It’s been cool, having him take on a bigger vocal role. With Woody or myself, it’s just us singing songs at this point. But with Barrett, there’s this ability to tailor songs to a new voice in the band. The song he sings, “Everything You Know,” we talked through the lyrics and the story. Woody and I have always done that, gone through songs in detail. Although sometimes, I don’t necessarily want to influence the pictures anybody else sees in their head while singing.

Once a song is written and out there, it belongs as much to the listener as the singer or the writer. Sometimes they come up with something different, too. “Can’t Get Home” from the last record, Woody thought I wrote that for soldiers coming home and he wasn’t the only one. I had not necessarily meant it that way, but I talked to enough other people about it that it kind of changed the song’s meaning for me, which was cool.

Did taking on the production yourself make Arm in Arm more collaborative than past albums?

I feel like what we do on stage is try to give everybody in the band moments to shine while keeping things moving. Producing this record ourselves was like that, more so than us playing while someone else producers. There are songs where I remember, so and so arranged this part, so and so suggested this harmony, so and so came up with the idea for this mix. So many different pieces where I can see everybody’s fingerprints. I’m proud of that.

I’m just psyched to have something to roll out into the world, reach out a little bit. You know, it’s not the best time to be releasing a record because we can’t tour. So I hope this will reach and touch people. I’m definitely prouder of this record than anything we’ve ever done.

Read part one of our Steep Canyon Rangers Artist of the Month interviews here.