Steep Canyon Rangers Carry On, Without the Suits, ‘Arm in Arm’ (Part 1 of 2) 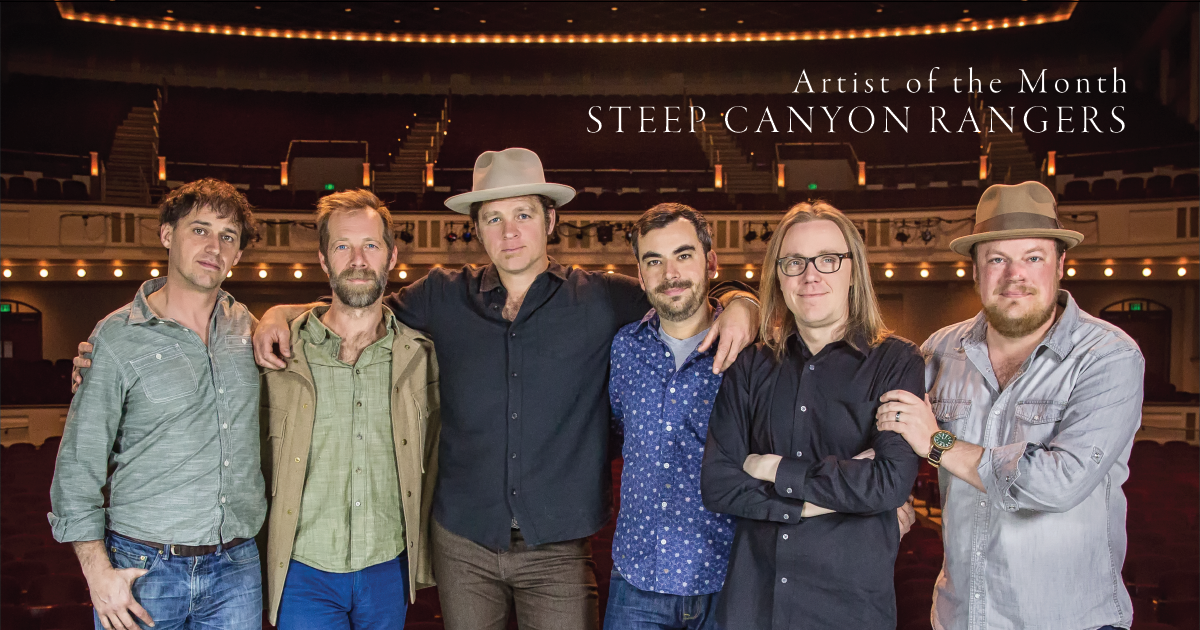 The COVID-19 virus has pretty much shut down the music industry, with nightclubs and concert venues shuttered across the world. And yet the Steep Canyon Rangers have had their most productive year ever in the midst of it all. October will see the release of their new studio album, Arm in Arm, the Rangers’ third record in less than a year.

BGS caught up with co-leaders Woody Platt and Graham Sharp (Read part two here.) in separate conversations leading up to the release of Arm in Arm, starting with Platt.

BGS: Since touring can’t happen these days, you’ve had to make do with livestreams and also drive-in shows around your home territory. How have those gone?

Platt: The drive-in shows went great, but they were a lot of work for us. It’s not like there’s a model or handbook: “Here’s what you do for live music in the middle of a pandemic.” So we tried to keep it simple. Since we really wanted people to stay in their cars, we had a short-range FM transmitter and no live PA, trying to keep everybody tethered to their cars.

We were lucky that, through our work with Steve Martin, we know someone who is a leading AV guy. He developed a truck with stage bolts, transmitter and LED screen popped out the top — a mobile rig he’ll keep using all over the country. Sonically, it was like being in the studio. And instead of applause, there’s horns and windshield wipers and headlights, which was amusing. For the encore, they called us back with horns. Ultimately, I think it was joyful — a unique bit of fun for an audience that hadn’t experienced any live music for a long time.

It also appears you’ve had a change in direction, not musically so much as in terms of style. You’re not wearing suits on stage anymore?

I don’t know how to explain that other than that the music evolved, so we did, too. Presentation has always been a constantly evolving thing. We didn’t wear suits at the beginning, then we did for a long time in the middle — and we still do when we work with Steve Martin. But hey, we’re the Rangers and we’re still looking nice even if we don’t regularly dress up in suits anymore. And much like the music, it’s an evolution that was not calculated or contrived. We’ve kind of gone more upper-casual, I guess. Bluegrass business casual.

Was putting out three albums in less than a year part of a master plan?

We never would have planned anything like that, but these three records were all basically done not too far apart. Arm in Arm was all but mixed when the shutdown hit, and that part of it was something we didn’t have to get together for. We could send that around, work on tracks remotely and share them back and forth. The other two were both already in the can, fortunately.

Watching all this come out, you’d almost think it’s just life as usual. If nothing else, it’s been great to be able to continue sharing music with the world. And it’s also kept us productive and in touch with each other and also the idea of pushing forward. Without these projects to focus on, we could have drifted away from each other. But we’ve had things to focus on day in and day out, to stay creative and in communication.

How did you wind up collaborating with Boyz II Men on the Be Still Moses title track?

All credit for that goes to our producer Michael Selverne, a cat from New York who is also an attorney and musician himself. He’s got a lot of connections and he works them all. He called me up one day and said, “You guys are an all-male singing quartet, and I consider you a vocal group. Well, I know another great vocal group for this song, too.” “Oh yeah,” I said, “who?” He said Boyz II Men and my jaw just dropped. But I never want to discourage or squash any idea that seems unobtainable, so all I said was, “Sounds great. If you can pull that off, we’re game.”

He not only pulled it off, he incorporated them and our band and the symphony in a way that worked. It was pretty unusual company for us, but we’re used to that. First time we met, we were set up onstage with the symphony at Schermerhorn [Symphony Center] in Nashville, just milling around, and here they come. Once we started, I had to kick that song off with a little guitar run and sing the first verse — a tall order when a bunch of singers like that are staring at you. But it turned out great.

Since Arm in Arm was the first album you guys produced yourself, without an outside producer, what was that like?

There are a lot of good reasons for using a producer, especially the fact that we’re a democracy and everybody in the band has equal weight in discussions and decisions. I love that, but it can take longer to get from point A to point B while keeping everybody happy. It can help to have an outside person to mediate and help with decisions when time is of the essence. But this record came together very quickly, and we had a lot of faith in our engineer’s skill and his ear.

What’s next after this? Are more live dates with Steve Martin and Martin Short on the docket?

I was talking to Steve recently and he told me they have picked up every date that was on the books. All the shows that were canceled, they’re already rescheduled. We were overseas when the lights went out from the pandemic, supposed to play in London, and it’s been a day-by-day experience ever since. So there’s a lot of optimism in rebooking everything and I hope it all turns out. But I have to admit, I kind of chuckled to myself about already rescheduling. I just don’t know.

It’s been more than 20 years since you guys first got together at the University of North Carolina. Ever think Steep Canyon Rangers would still be going two decades later?

Since we’ve been around for so long, it’s easy to think we should be bigger or more successful by now. But taking a step back and looking at the things we’ve actually accomplished, it all adds up. We’ve had a lot of good things happen, good music and shows and records, and we’ve been recognized in some great ways. I never thought we’d win a Grammy award!