With Debut Album, The Panhandlers Take Pride in West Texas 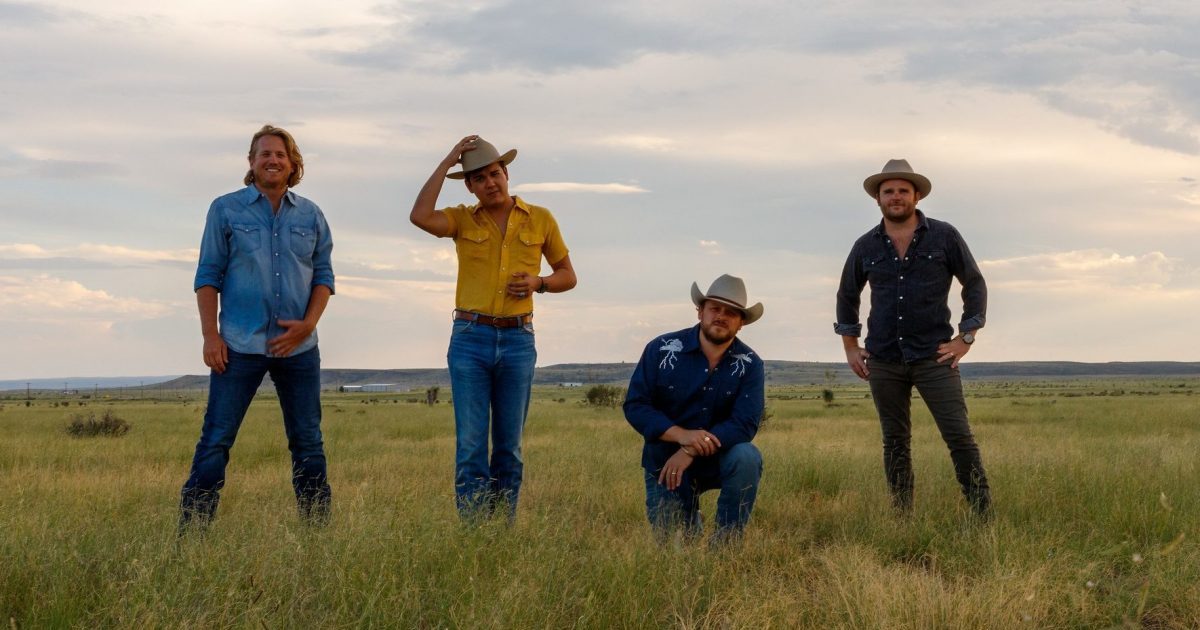 The Panhandlers are carrying on a West Texas songwriting tradition that’s both witty and wistful, and their self-titled debut album will almost certainly appeal to anyone who’s fond of the Lubbock life. With 10 original songs about their home turf, the four artists — Josh Abbott, Josh Baumann, Cleto Cordero, and William Clark Green — teamed up with producer Bruce Robison, who somehow makes the task of balancing four lead singers look like a breeze.

By email, all four of the Panhandlers fielded questions from BGS about working together, writing about each other, and not quite being able to leave West Texas behind.

BGS: I’m sure you guys all knew each other before this project, but when did you all first get into a room together?

John Baumann: Other than music festivals or late-night gatherings after shows on buses, the first time we sat down and talked about this project as a group was at The Next Waltz office in Austin, Texas. I think Josh was still mispronouncing my last name at the time. Needless to say, the group was all on good terms and friendly, but I think this project really bonded us as musicians, songwriters, business partners and made us become friends.

William Clark Green: I have written with Josh and John previously, but it was my first time writing with Cleto. It was a lot of fun getting to see his thought process. Obviously I have a lot of respect for everyone. I knew we wouldn’t be writing any trash songs.

There are several references on this album about leaving West Texas behind. Is that common for people to insist they’re going to move on, but never actually do? And what compels them to stay, do you think?

Josh Abbott: Well it’s twofold: 1) Yes, I think it’s common for people to desire a change and never seek it, and 2) There are a lot of folks who have to move away and reflect on their time there with nostalgia and a fondness. This isn’t exclusively unique to being from that region of Texas by any means, but it’s the lens from how we approached this album.

Cleto Cordero: There’s not much to see or do in West Texas that isn’t related to oil and gas or farming and after a while the sometimes bleak landscape can lend one to ponder what [it would be like] to live in a big city or any other place with topography that isn’t flat or covered in mesquite bush! Oh, and water… jumping into a body of West Texas water only occurs in one’s dream. Most folks entertain the idea of leaving for greener pastures (which is why I believe creatives flourish there, always exercising their dreaming muscles), but end up sticking around because although life there is simple, it is a great place to raise a family. The land is home to many good-hearted, hard-working people — traits that come through persistence and faithfulness.

JB: Ironically, all four of us have left the region at some time or another, but it always calls us back. Mostly for opportunities to perform, but sometimes just to see people you have gotten to know. I have become such close friends with some people in the region that sometimes it feels like I have a second life there when I go back, and I just pick right back up where I left off. I think it’s common for people to want to leave the area, and explore bigger and more developed cities, but there is something about it that always calls you back. I think people also feel compelled to stay. They love the sunsets, and dry air, and the four seasons — one of those only regions in Texas that actually gets four seasons. And seriously Lubbock is one of the friendliest cities in the U.S. Not just because the billboards say it, but because it really feels true.

WCG: I think the Mac Davis song says it best: “Happiness was Lubbock, Texas in my rearview mirror.” The song eventually turns around and tells the story of how much you miss the country and the people

“This Is My Life” captures the life of a touring musician in Texas — brisket for lunch, pizza at night. And you’re sharing it with friends — “a rowdy group of dreamers, drinkers, and has-beens.” Josh, how hard (or easy) was it to kind of distill these guys’ personalities to just a few lines?

JA: Honestly, it flowed pretty naturally. I wrote it in less than an hour at my house the night before our last studio day. Bruce encouraged me to write a feature song where I could have a voice on the album since the other three guys all have features. I originally just wanted to blend in the background on this album, but Bruce said I needed a feature too. So I went home and just wrote a song about the group and the life we live. The only line I debated was “William’s loud but he’s a good hang” mostly because I didn’t want it to seem like a shot at him. But that’s his personality and that’s why everyone loves him. So I kept it in there.

CC: I love how fun and simple that song is. I think Josh captured each of us pretty well.

I like the dry humor on this record, like on “No Handle.” It’s funny without being corny, which is tricky. As songwriters, how do you strike that balance of being lighthearted without going into novelty song territory?

JA: I’m not sure I’ve figured out that balance! But John Baumann sure has!

JB: I just tried to be as plainspoken about it as possible. I just found humor in the fact that there is a guy who is openly unhappy about where he is. I think it is a delicate balance, but I think it’s important for voices in songs, or narrators, to have personality — be it sad, or ironic, or subtly jabbing. It just gives the lyric and the story more truth.

WCG: I think you just have to believe in what you are saying and the rest comes with it.

CC: I heard Carlos Santana say during a video something along the lines of “You should play, write, sing, and perform being led by your Spirit. If you want to be funny or make a joke of everything, you should be a comedian.” I think John (who wrote that song) is a clever man, but he knows the difference between clever and being a jester. I believe he is the former.

“Caprockin’” shows a bittersweet portrait of life in and around Lubbock. What sets that city apart from other places you’ve been in Texas? What do you wish people understood better about it?

JA: I think my biggest frustration with people about Lubbock is [when they say] that it’s in the middle of nowhere and there’s nothing to do. And I just don’t agree with that, especially in the era we live in now. You can fly to Lubbock from the major cities in Texas in less than two hours. And there hasn’t been a city that has transformed as much in a per capita manner than Lubbock has. Businesses are developing constantly, the city is expanding south at a rapid pace, and Texas Tech has grown into an enormous institution. All Lubbock lacks is professional sports teams, high property taxes, and congested traffic. Lubbock is great! I’m glad John wrote this song with a sense of endearment. This song channels Jimmie Dale Gilmore so much to me.

JB: The friendliness of it. People will take the shirt off their back for you at every corner. They treat strangers like friends. They support you when nobody else will. They rarely have a bad word to say about anyone. I wish people understood that it’s more than just a flat desert panhandle town. It has a real community, and it’s a wonderful place to raise a family.

CC: Many towns in West Texas just don’t have the infrastructure that allow artists to flourish. Lubbock seems to be a mecca for artists and musicians of West Texas because it has just about everything you’d need to get a musical dream to take flight: a continuous stream of young, potential listeners (via Texas Tech University), a legendary watering hole and stage to play your original songs (via the Bluelight Live), and various local radio stations that promote and play local artists (via Red Dirt Rebel). I don’t think folks outside of West Texas understand how we find it so beautiful a place, despite it being dry, dusty Flatland.

WCG: I wish people understood how laid-back and nice the people are in West Texas. In all my travels they are my favorite.