The Wood Brothers Build Slowly to Share ‘One Drop of Truth’ 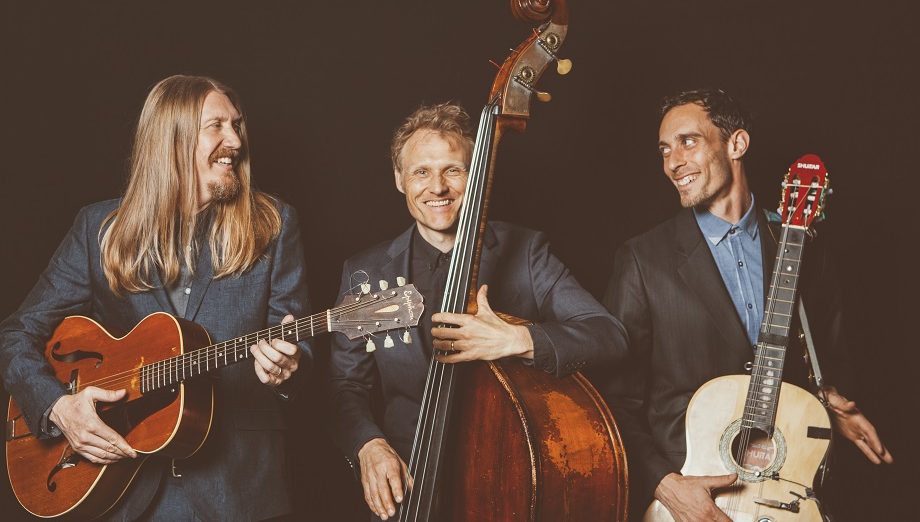 The Wood Brothers write songs for front parlors, back porches, Saturday night rave-ups, and Sunday morning comedowns. Theirs is a sound anchored by the rudiments of American roots music — acoustic instruments, Southern strut, Bible Belt bounce — with deeper grooves and a willingness to break from tradition. One Drop of Truth, the trio’s latest record, finds the guys exploring that sound even further. Some might say that band members Chris Wood, Oliver Wood, and Jano Rix have become the cool uncles of the Americana family — younger and less rigid than the old-timers, while also wiser and more worldly than the newcomers.

BGS: You’re family men now. Did you record One Drop on Truth in Nashville because it would allow you to stay close to home?

Oliver Wood: We cut our previous two records in town, too. We had previously done records in other destination cities, and I’ll admit there’s something to be said for holing up somewhere exotic and getting a lot of work done, versus coming home every night. But the beautiful thing about this album was how we spread it out over the course of nine months. It was such a different experience.

Tell me about that process. Isn’t that a particularly long timeline for you?

What’s been typical for us is to let some songs gestate, work on them for a year, then book a studio for two weeks and just go in there and knock it out with a producer. That’s the normal way to do it, I guess. The process we chose this time was to work on a couple songs at a time and record them in between tours. We almost treated them like demos: Rather than booking a fancy studio and doing the whole album in one shot, we went to more modest studios — places we really felt comfortable in, places where we could experiment. Since we only did one or two songs at a time, each song got more attention. It took the stressful part out of the process and added the freedom of being creative. If something didn’t work out, we’d re-record it the next time. We could sit with stuff for awhile. We produced things ourselves, which is something we did on the Paradise album, too, and we wanted to take that to the next level.

Did you approach the songwriting differently, as well?

It was very collaborative. When we’re working on new music, all three of us make a point to … well, I hate to use the word “jam,” but that’s what we do. We improvise. We’ll get together in a space and just play random grooves and riffs, without talking. We record it and improvise off one another in a very free sort of way. A lot of our basic musical ideas come from that process. And we’ll take those things and file them under them “things to work on later.” In the meantime, Chris and I have books full of lyrics, and we take them home and work on them.

Some bands will radically rethink their live show with each new album. They’ll change their clothing, their stage setup, their light show. Do the Wood Brothers concern themselves with that, as well, or do you focus on the music?

We do think about the presentation. We’ll try using different lights for a new tour, or we’ll bring a big black curtain around the country with us. It doesn’t necessarily match up with an album cycle, though. What we enjoy, constantly, is integrating new songs into a show, whether it’s a new cover tune or an old Wood Brothers song that we’ve completely reworked. That last bit is something we’ve really enjoyed lately. We’ll take an old song that was originally a mellow acoustic song and we’ll turn it into a rocker, or vice versa. We love transforming those things. We try to keep that process going, regardless of which album we’re promoting.

That’s a big part of the roots music tradition, right? Re-examining old songs and presenting them to new audiences?

Absolutely. We’re huge music fans and music nerds. There are so many songs I’ve always wanted to do, and it can be a personal indulgence sometimes, playing some of these songs and making them your own. Ultimately, the whole thing is a privilege, just to share music with your bandmates and your audience. To play a cover song everybody knows and loves, that’s really gratifying. We’re all loving the song together. It can be one of ours or someone else’s. It’s all about us connecting with people, and them connecting with us.

You’ve been connecting in some large rooms lately. You’re playing venues like the Ryman on this tour.

The way I think of it is, we’ve had a very gradual rise to the middle, which I appreciate. It’s held my interest over the years. I can’t imagine a meteoric rise to the top. I prefer the non-meteoric rise to the middle, because it’s so gradual that you might not even notice. We’ve been playing these markets for years, and the climb toward bigger rooms has happened really slowly. Playing the Ryman this spring is a huge jump for us, and a real special occasion for any band that’s never played there before. That might be the biggest headlining show for us.

I imagine that you’ve run into some challenges in those bigger venues, too. They’re not always designed with acoustic bands in mind.

We’re learning what works and what doesn’t. We’ve did some crazy opening slots for larger acts — everyone from k.d. lang to Brandi Carlile to the Tedeschi Trucks tour this past summer. Several years back, we opened for Zac Brown at venues like Bridgestone Arena, and it didn’t always work, to be honest. It doesn’t make sense to have us play at Bridgestone.

But we did learn a lot from doing those shows. We learned that if you’re doing something subtle — the stuff we enjoy doing for a captive audience inside a theater — it isn’t always going to work for a basketball arena. At the Ryman, on the other hand, some of that stuff will definitely work. We started playing at listening rooms, and we still like that subtle stuff. Like I said, we’re still learning. It’s an epic quest.

As a three-piece band, the recording studio allows you to make a much more lush, layered sound than the one you can create in concert. Where do you draw that line between the honest — but limited — sound of a live trio and the infinite sounds you can make with overdubs? And does that line change with each album?

It changes with each song and with each album. What some people were drawn to at the beginning of the Wood Brothers’ career was how spare we sounded. We were pretty much a duo on our first album, and we mostly played live in the studio. That album was meant to represent what the two of us sounded like. As we began playing bigger venues, we grew sonically and added a member. Having Jano in the mix allows us to experiment on a song-by-song basis, where we can add keys, horns, or strings.

The venue can dictate a lot of things, too. Subconsciously, the venues you’re playing do affect the way you write. Sometimes, when we’re working on a new song, I can’t help but picture us playing it at a festival. I’ll wonder how it’ll work in that context. There are certain songs where you think, “This will rock in a bigger room,” and there are other songs where you think, “This is a nice song for a theater, where everyone is facing the stage and remaining silent.” You can’t help but think about that. Your environment colors the way you write.

To get back to your question, though, our general aesthetic is to not add too much, in general, but we’ve learned that the studios can be very different than the live shows. Oftentimes, when we prepare a song for its live debut, it changes from its studio version. It doesn’t need to be the exact same.

The band has worked with different labels over the past decade. You were with Blue Note for years. You worked with Zac Brown’s label, Southern Ground, as well. What’s your current situation?

We have our own label, but we also work with Thirty Tigers for marketing and distribution. We really like the independence part of it. It’s nice to own your own music. We have the luxury of creating our own budget for an album. It’s not that expensive these days, especially if you’re not paying a producer. For us, the best part of it is, we just make an album. No one is watching us or checking in. We can get the purest, uninfluenced stuff. Whether people like it or not, who knows? But we like it. And we’re not beholden to anyone, on the creative side or financially.