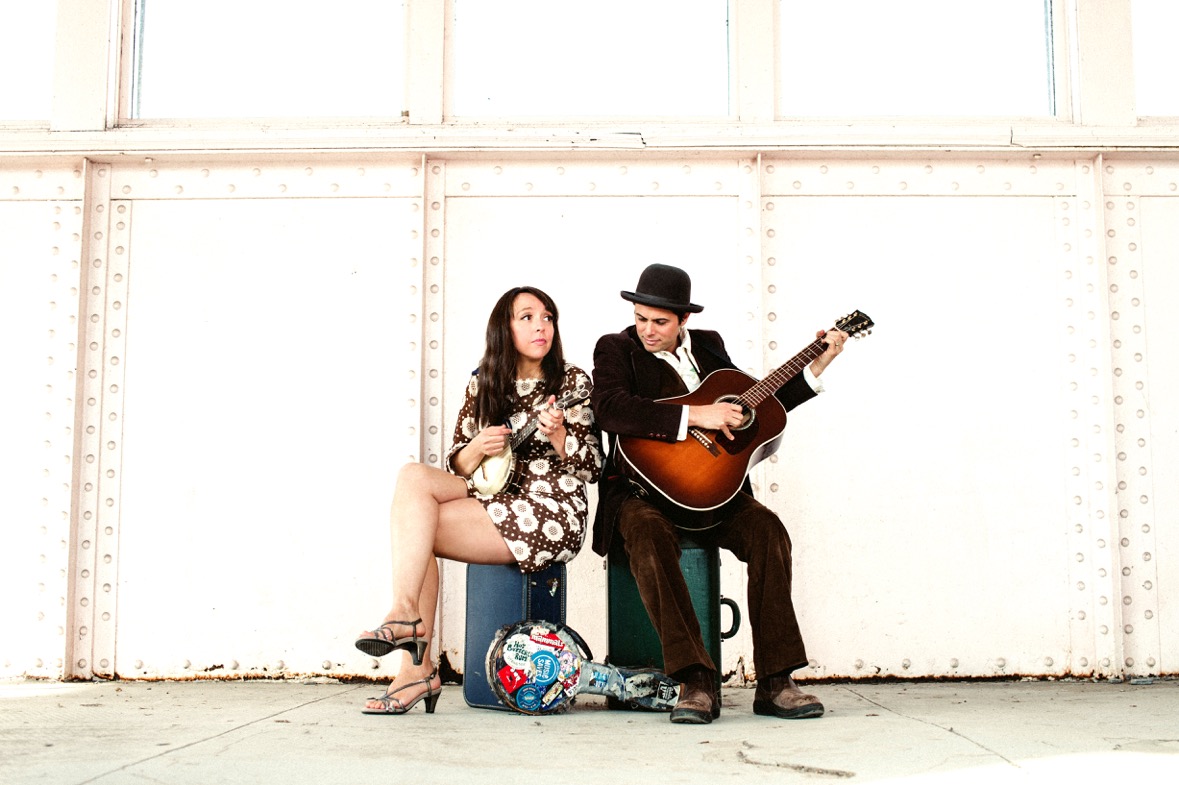 Artist: The Mike + Ruthy Band
Hometown: West Hurley, NY — we say Woodstock, NY. Our “actual” downtown was evacuated 100 years ago when the City of New York built the Ashokan Reservoir. So, even though we live in West Hurley, Woodstock is the closet town town. Kingston is also about 15 minutes away and we end up there a lot, too. There’s actually a sign up on one of the reservoir bridges that says “Former site of West Hurley.” Occasionally, when someone drives by, they wonder if we’re okay!
Latest Album: Bright As You Can
Personal Nicknames (or Rejected Band Names): The Mammals auditioned a couple silly band names: The G-String Pickers. The Co-ed Naked Stringband. As a duo, we almost went with Flora Fauna. We actually opened for the Avett Brothers as Flora Fauna back before they blew up, and I remember Seth Avett, at the end of the night, in his North Carolina accent saying, “We’d like to thank Flora Fauna … “ At one point we were gonna go with the Mountain Beds as a tip of the hat to the great Woody Guthrie tune, "Remember the Mountain Bed." But somehow we always come back to Mike + Ruthy. As a personal nickname, Ruthy sometimes calls me Beagle Bill. And I generally call her Rudy. (Her mom was in a band called Rude Girls, and I was a in a ska band in the '90s where everyone was called Rudy.)

Your house is burning down and you can grab only one thing — what would you save?
MIKE: I think I have to say the kids. After that, whatever expensive microphone I happen to be borrowing at the time.
RUTHY: Yep, the kids. And then probably a Gibson.

If you weren't a musician, what would you be?
MIKE: I’d most likely be some sort of writer. Playwright, novelist, poet, storyteller. Outside of a creative pursuit, I think I would have been pulled toward an environmental advocacy group like 350.org.
RUTHY: I've always secretly wanted to work at JiffyLube.

Who is the most surprising artist in current rotation in your iTunes/Spotify?
MIKE: Lukas Graham. 10+ years ago, the Mammals were touring Denmark with a great agent named Eugene Graham. Lukas was Eugene’s teen-age son at the time. We made fast friends with the whole family — Lukas, Ella, Niamh … they all showed us around Copenhagen and hosted us in their unique bohemian neighborhood called Christiania. Lukas has since completely conquered Denmark as a pop star and is, just this Spring, breaking into the U.S. with the single "7 Years." Lukas reached out to me this April when he was performing in San Francisco and noticed we were on tour there, as well, so I hustled over to catch the end of his set. It was phenomenal to see him owning that sweaty, packed room with not only a great band and that same powerful, confident voice that I remember him belting out Irish ballads with back in the day around a festival bonfire, but with great stories. He related to the crowd like a folky, 'cause that’s where he came from, and it was joy to behold. When I went to his show last week in Brooklyn, he was wearing a Mike + Ruthy t-shirt.
RUTHY: Maybe it's not surprising, per se, but a recent day trip to New York City with my childhood girlfriend brought me back to Deee-Lite's World Clique and Pixies Surfer Rosa. Both are great albums and ridiculously good for singing along while driving.

What is the one thing you can’t survive without on tour?
MIKE There are a bunch of ways to answer this one, but I think I’ll narrow it down to my backpack.
RUTHY: Yelp.

If you were a car, what car would you be?
MIKE: Whatever car Tom Waits drives.
RUTHY: Ha! Probably the old 4WD '91 Honda Civic Wagon that I drove when I was in college. Unassuming and a little rusty, but totally reliable in any conditions, pretty rare, and kinda cute.

Vinyl or digital?
MIKE: Vinyl.
RUTHY: Vinyl. I actually own some Mighty Mouse vinyl, now that you mention it.

Meat lover's or veggie?
MIKE: I’d like to meet in the middle on this one.
RUTHY: Yeah, babe. Me, too.