A Desire to Inspire: A Conversation With Molly Tuttle 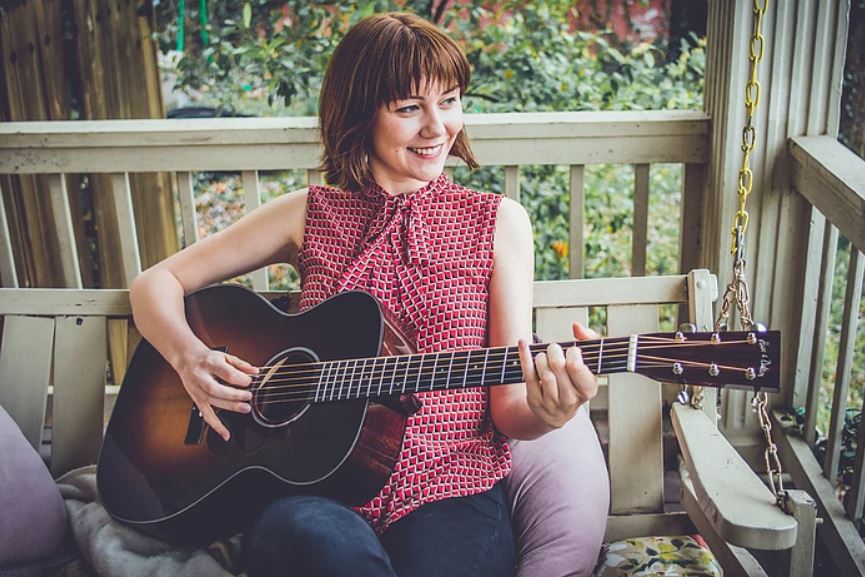 I can’t pin down the year I first heard Molly Tuttle picking a few tunes in a Sugar Hill Records suite at the IBMA’s World of Bluegrass, but I know it was before the event’s 2013 move to Raleigh, and I know I wasn’t the first to pay attention to her guitar playing. Indeed, it was only a few more years until Bryan Sutton called her name as a picker to listen to in the course of accepting one of his ten IBMA Guitar Player of the Year trophies—and just two years after that, last fall, she accepted the same award herself.

Even so, her growing recognition among bluegrassers has led to a higher profile for Molly in the broader musical world; she earned the Folk Alliance’s Song of the Year award in February, and a nomination for this year’s Americana Music Association’s Instrumentalist of the Year title, too. Between that, her own eclectic outlook, and the predispositions of journalists unfamiliar with the bluegrass world, it’s not hard to see why the musical substance of her engagement with the genre can sometimes be given short shrift. Yet the fact is, she appears to be as happy tearing through a bluegrass classic in the company of her youthful contemporaries—or with a certified bluegrass legend or three—as she is playing anything else.

I was reminded of this shortly before our interview, when Instagram presented me with a snippet of video that showed her sitting in with the East Nashville Grass, a collection of pickers who mostly work in other bands, at a ‘grass-friendly’ Madison club—and since the next Molly Tuttle record is still likely months away, it seemed like a good place to start the conversation.

Just this morning, I saw a video of you sitting in with the East Nashville Grass guys, ripping on some bluegrass—“White Freightliner Blues,” which I know you’ve been doing for a while—and it got me to wondering. Your dad was a music teacher when you were growing up; was he more of a folk guy, or an acoustic guy generally, or a bluegrass guy?

What my dad always loved was bluegrass. He grew up playing bluegrass, and that’s really what he studied and what he loves. But he did end up playing some folkier music; he played in a band called the Gryphon Quintet, which was all people who worked at Gryphon Music, the store he teaches out of. And that was jazzier stuff, some swing stuff, four-part harmony arrangements, and some of their stuff was kind of folky, too. So he ended up playing a bunch of different styles, but he really comes from bluegrass.

So when the family band got started, it was a bluegrass band.

You’re getting out beyond the bluegrass audience these days, into the larger musical world, and there’s been a whole line of people over the years who have done that. What do you think you’ve learned as a bluegrass musician that you carry with you when you do all this other stuff?

I think one of the most valuable things I learned was improvising and making up my own solos. Just being creative, really, because it’s such a creative genre. Some of the most incredible improvisers in the world are bluegrass musicians and you can really carry that into any genre—those improvisational concepts, you can take those in so many different directions. So that’s something I feel bluegrass really taught me, something I can use for the rest of my life.

And also, technique. I think it’s so important in bluegrass to have great technique, to be able to play fast, slow…I think that was really helpful for me to learn. And the style itself is so authentic. It has this raw feeling to it, and my favorite bluegrass is old bluegrass, where it’s all so live and energetic—just real, authentic stories from their lives. I think that’s really inspiring.

I’ve heard from some younger musicians that when they found a bluegrass jam or something like that when they were getting started, the older guys were really encouraging and supportive—and then, when they started getting into other kinds of music, those folks weren’t so supportive. Have you run into that?

A little bit. People just like what they like, so people who love traditional bluegrass aren’t as supportive as others about me branching out and doing new stuff. But I haven’t run into too many people who are openly discouraging me from doing what I want—it’s just not their cup of tea, so they’re not as excited.

When you started putting the Molly Tuttle Band together, how did you decide what you wanted? Was that a question in your mind—am I going to have a banjo player?

It kind of was! But it was like the right musicians just sort of presented themselves to me. I’ve played with Wes [Corbett] for three years now and he’s such an amazing musician—he’s so versatile. He plays amazing stuff on my songs that are more singer-songwritery, but he’s an incredible bluegrass musician, too. So it’s been a great fit for me. I think the bluegrass band just made sense. But then, I’ve been working on a new album that has drums on everything, and electric guitars, so I think going forward I’m going to be trying out different band lineups.

Are you working on your new record a few days at a time, or did you set aside a big block of time to make a whole record?

We had six days where we got all the tracks done; eleven songs, all with the same band. We did that at Sound Emporium and it was mostly all live. And then I went in and did harmony overdubs, I overdubbed some vocals, put some other instruments on, tracked strings—that was really fun. Nathaniel Smith worked out these really great string arrangements with Rachel Baiman and Mike Barnett, so they came in. And then we got some special guests on it—Sierra [Hull] came in and played, which was fun. So it’s just been going into the studio and finishing things up whenever I’m back from touring.

I just went and listened to recordings of Clarence. And with “I Am a Pilgrim,” there’s this great YouTube video of Clarence and Roland playing it, and Clarence was playing the coolest stuff ever. I teach at camps sometimes, and last summer, I thought it would be fun to teach a workshop on Clarence White, so I transcribed his rhythm playing on that, and was teaching it to people. So that was a good one to get to do, because I already knew some of the licks, and I’m obsessed with his playing on that song—it was fun to try to get into that mindset.

It seems like you really succeeded in being Molly Tuttle, but also Molly Tuttle playing Clarence White.

That’s what I was trying to do, so that’s good to hear.

We played a house concert a few weeks ago, where [12-year-old fiddler] Clare Brown and her dad came out and opened for us. I heard her doing a soundcheck with “White Freightliner Blues,” and I thought, I’ll bet I know where she learned that. Does it freak you out that there are even younger musicians coming up who are influenced by you?

I think that’s so exciting and that’s what I wanted to do with my music since really early on: inspire the younger generation, especially younger girls. I think it’s really important for them to see the generation of women before them doing it. So that’s one of the things that keeps me going with my music, to see something like that.

Who were you seeing that way? Who did you look up to?

When I was a kid I looked up to Laurie Lewis, Kathy Kallick, Keith Little, Bill Evans, my dad—all these Bay Area people. There’s a really great scene there and they were all so supportive of me. But especially Laurie and Kathy, seeing them lead their own bands and play shows. They were my biggest heroes and I thought they were the coolest, and I still do.

Is it important to you to keep an eye on and try to inspire young musicians to play bluegrass in particular?

I think it’s a really great tradition, especially for kids, because it’s such a supportive community. And there are jams, so you can get together with other kids your age. That’s a really healthy thing for kids to do for fun. For me, it was really great in high school to have that, to go to festivals, and get together for jams, and play shows—that was a great outlet for me. It’s a great genre for kids to play, and it’s really important to keep carrying on the bluegrass tradition, to keep it alive, so I think it’s great to encourage kids to play it.