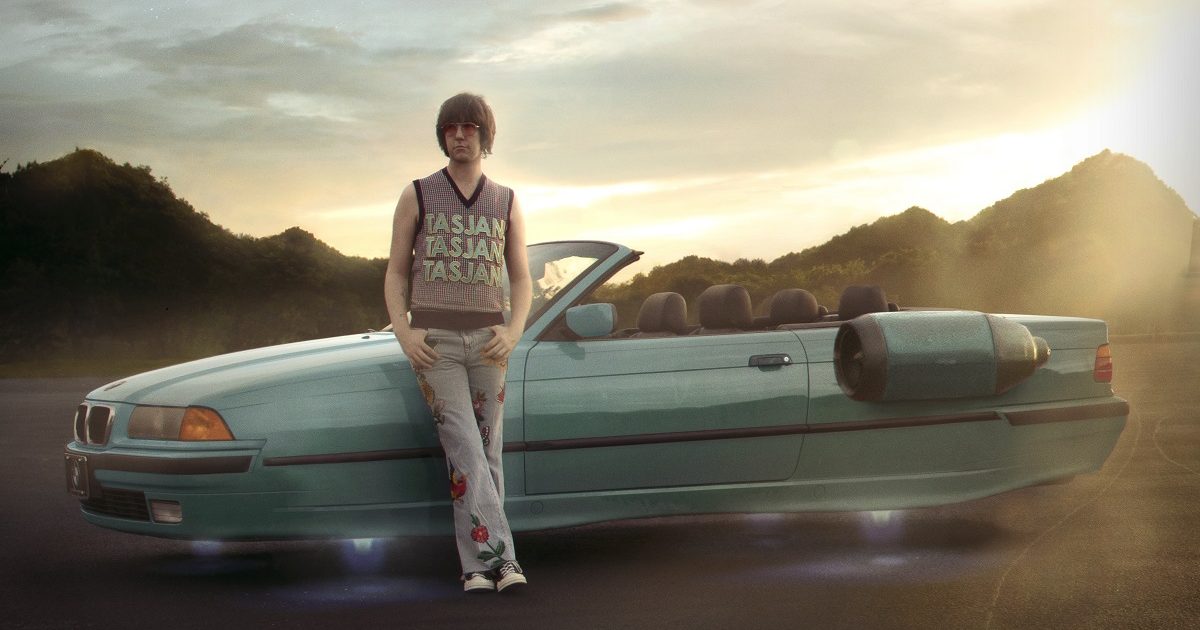 Not every songwriter can get away with an opening line like: “The world outside my window / looks like Nintendo / but I’m not playing games anymore.” Leave it to Aaron Lee Tasjan, who guides us past those lyrics into “Not That Bad,” a subtle and sincere song about confidence and capability that showcases the Nashville-based musician’s gift as an acoustic instrumentalist as well.

Tasjan wrote the song just after suggesting to his longtime label that he wanted to produce the next album — an idea that the executives weren’t sure about. So, Tasjan went ahead and did it anyway, working with co-producer Gregory Lattimer. The result is Tasjan! Tasjan! Tasjan!, likely his most revealing album yet, and one that embraces his fondness of guitar, video games, and his own self-proclaimed dumb songs. He chatted with BGS by phone leading up to the release.

BGS: “Up All Night” sounds like a pop song, but it’s also very personal. What was on your mind as you were writing that song?

Tasjan: A couple of things. I love songs that I would call silly little pop songs. Something as simple as “Sugar” by the Archies. I just love simple, but with a good hook. I’ve been listening to music like that for a long time. As far as the lyrical content, all that stuff came directly out of my life. There’s not one thing that I’m singing about in that song that isn’t 100 percent me, really. And honestly, if I could say there was a mission statement for the record, it was to just be as unabashedly me as I possibly could. So, “Up All Night” became a front-runner early on, a cool blueprint of anything else that I wanted to do.

To me, that song is about the things in life that come and go — you mention money and love and health. And then you’re ultimately realizing that’s just how life is. Is that a fair assessment?

Exactly. I’ve been a very analytical person in my life. And there are some things that you don’t have to analyze. Like, if you are analyzing it, you’re spinning your wheels, or in some cases, creating scenarios that wouldn’t even exist otherwise. It’s kind of a mental health tip for myself to realize, “Look, man, that’s just the way it is, dude.” [Laughs]

It’s refreshing when you come to that realization and you just go on and live your life.

Right! I think that’s true. Control is part of it — you want to feel like you’re in control. But all of that is an illusion. Certainly we have been witness to several moments recently where it feels like reality is coming undone, so we’ve had to reckon with how little control we have over everything. But at the same time, for a guy like me, it’s helped me to reassert the parts of what I can do, of being seen, asking to be seen, and seeing others. That’s not something that I’ve always been that comfortable with — the asking to be seen part. It’s been hard for me, but on this record, I felt more called to do that.

Speaking of that, there’s a lyric in “Up All Night” about breaking up with your boyfriend to go out with your girlfriend. Is that the first time you’ve addressed that topic on a record?

I think so, yeah. Well… on the Silver Tears album, there’s a song called “Hard Life,” and a verse in that where I sang, “There’s a redneck bummer in an H2 Hummer and he sure does hate the queers.” That was true. That happened to me. I got stuck in a drive-through at Taco Bell one time in small-town Ohio with some football team kids who, in their mind, had me pegged. They were yelling all kinds of stuff. I parked my car later to eat the food I’d gotten in the drive-through and they came over and were banging on the windows, calling me names. It was scary, man.

I didn’t know that happened to you. That’s frightening.

But at the same time, that is a tiny part of what someone who is transgender encounters. You kind of put in perspective. What’s it like for somebody who has to deal with that every day? It’s heartbreaking. In a lot of ways, I’m trying to show this side of myself because I feel like, especially if I’m going to be the most “me” that I’ve ever been on a record, it’s imperative to stand in that truth.

The videos for “Up All Night” and a few other songs resemble really cool arcade games. What is it about that visual presentation that grabbed you?

I think a lot of it is in because of the time I grew up in, which was the late ‘80s and the ‘90s. Video games were just huge! And something to do was to go over to the arcade for the whole day. [Laughs] Like, drop me off at 11 in the morning and come pick me up at 8 p.m., and I’ll have the time of my life! I thought with the music, sonically, I wanted to create sounds that were almost like a Polaroid picture, colors that didn’t quite exist in real life. There’s a lot of guitars on the record that sound like synthesizers almost. They’re sort of this weird hybrid combination somewhere between a guitar and a synthesizer, which was very intentional.

I was really young! In fact, I remember when it was. I was 8 or 9 years and my family took a summer vacation and my parents hired a girl who went to the local high school to watch me and my sister, because we were so young. And this girl was obsessed with MTV, of course! So, that’s what we watched all summer long.

My two favorite music videos were “Runaway Train” by Soul Asylum — because I loved that driving, strumming, acoustic guitar, which has become something I use in my own music all the time — and the other one that I really, really loved was the Black Crowes’ cover of “Hard to Handle.” I loved how Chris Robinson looked and I loved how the song sounded. It made me turn every single thing that I had in my possession that could be a guitar, into a guitar. So, my tennis racket became a guitar. My baseball bat became a guitar.

The place where we staying that summer at the beach, somebody who played guitar must have stayed there before, because I actually found a tortoise-shell guitar pick in that house. I didn’t play guitar for years after that, but I carried that pick with me EVERYWHERE. It was my most prized possession. So, when my family moved to Southern California a few years later, there wasn’t a lot to do when I first got there, and I was able to talk my parents into letting me get a guitar and start trying to go for it. I was 11 or 12 by that point.

Were you listening to any bluegrass or country at that time?

The first thing I heard that set me off in that direction was played for me by my mom, and that was early Bob Dylan stuff. That got me into acoustic music, and I remembered the “Runaway Train” video, and I thought, “Let me find some more stuff like that.” I actually started writing songs almost right away. I was a really funny kid, you know what I mean? I was like the class clown, so making my songs kind of humorous felt natural to me. I was only 13 or 14 years old when I played a song I had written to an older guy, and he said, “Man, let me help you out. It sounds like what you’re trying to do, is something like what this guy does.”

And he gave me a cassette tape of Prime Prine, which was a John Prine greatest hits collection. And that was the day I decided that I wanted to be a songwriter. [Laughs] Not only was he doing what I had been trying to do, he was doing it in this way where it was like I’d only ever seen Clark Kent – this super-nice guy, mild-mannered, kind of plain. Then you press play and you hear “Please don’t bury me down in the cold cold ground…” and Superman showed up! That was everything, you know? I got obsessed with that.

Listening to your new album on the whole now, what do you like most about it?

I just love how dumb it is. [Laughs] I love how simple it is! I know that sounds silly, but it forces you to consider how much of what’s there really needs to be there. I really do like hearing people sing about their stories, so the more that’s in the way of that, the less enchanted I am. I just wanted to make these songs kind of simple and plain spoken. To have some poetry, certainly, if it’s possible for me to do that, but also to really lay it out there in this dumb but hopefully sweet way. I don’t look at it as though I’ve made some sort of amazing artistic statement or whatever. I just got really got down to it and said what I wanted to say, how I wanted to say it.