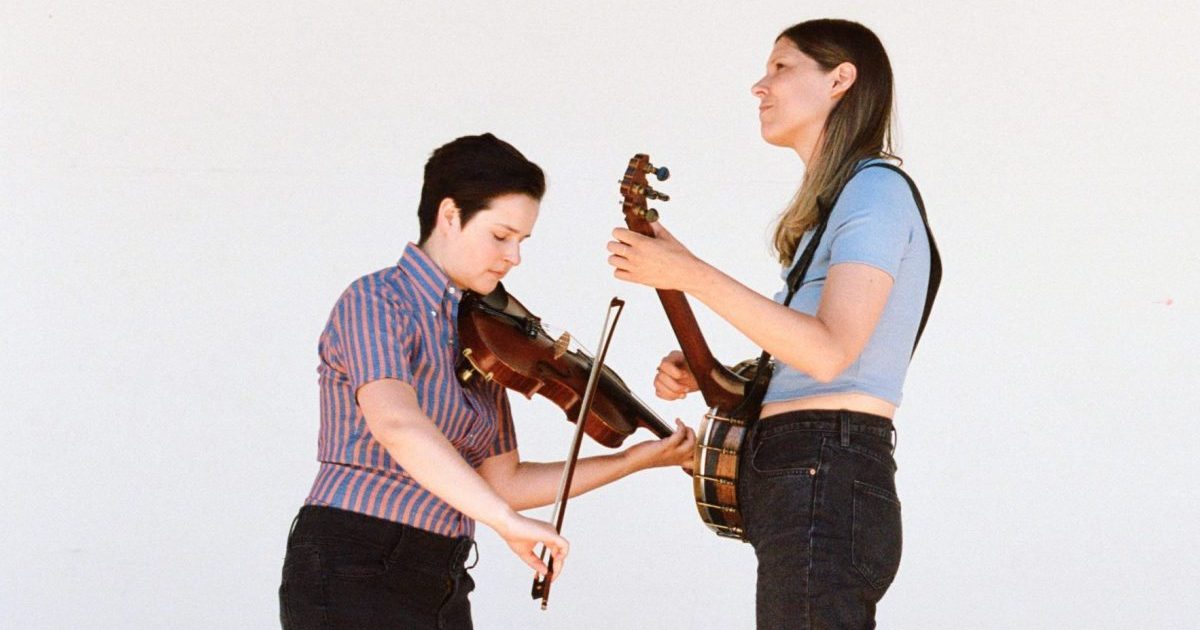 Know any banjo-and-fiddle tunes inspired by and dedicated to Clarice Lispector, an obscure Ukrainian-born and Brazilian-raised mid-20th century novelist?

Here’s one: the title piece from Hurricane Clarice, the upcoming second album by the duo of clawhammer banjoist Allison de Groot and fiddler Tatiana Hargreaves. The tune is a melancholy, wistful instrumental waltz, paired here with the old fiddle tune “Brushy Fork of John’s Creek.” It’s perfectly in keeping with the bluegrass and Appalachian traditions that brought the two together when they were teen folk camp attendees a decade ago and have informed the music on their 2019 duo debut and in appearances everywhere from festivals and music workshops to house concerts.

Hargreaves says she wrote the piece after finishing Lispector’s 1946 novel, “The Chandelier,” enraptured and inspired by the “abstractness” and even “spaciness” of the highly distinctive, involving writing.

“I mean, it’s very loosely connected,” Hargreaves says of how the writing sparked her. “It’s not inspired by a specific thing. It’s more just what I was feeling a lot after reading one of her books. And when Allison and I were working up material for this record, I brought it to the table and it was just feeling really good.”

The album is full of loose and unexpected connections, taking some seemingly circuitous routes. Rachel Carson’s 1962 environmental primer Silent Spring, for one, is cited in the liner notes as being evoked by their choice of opening song, “The Banks of the Miramichi.” The song come from New Brunswick, dating to the turn of the 20th century, but came to Hargreaves and de Groot via a recording from around the time Carson was writing about DDT imperiling that river.

There’s “Every Season Changes You,” a touchingly sentimental Roy Acuff song that de Groot became obsessed with after hearing a bluegrass version by Rose Maddox and, in the context of the album, relates to both climate change and the dislocation of life in the pandemic.

There’s “I Would Not Live Always,” a hymn from a poem by William Augustus Muhlenberg. Hargreaves came to that song while helping folk pioneer Alice Gerrard digitize photos for a book project and being charmed by a picture of Tennessee fiddler Clarence Farrell and his wife — accompanied by their dachshund — holding a scroll with shape-note scale. That spurred Gerrard to play her a Mike Seeger field recording of Farrell playing this song.

And that song, in the duo’s interpretation, has another unlikely thread: While crafting a banjo interlude, de Groot was directed by producer Phil Cook to listen to the Velvet Underground’s somber, dreamy “All Tomorrow’s Parties,” of all things, for inspiration.

But the Lispector nod is the one which led them to find the most significant, and personal, threads that run through the album — and in some ways, the one that ties them together.

“We started to make the connections with family that tie the album together,” Hargreaves says. “Lispector is originally from Ukraine, and Allison has family that’s Ukrainian. And then [Lispector] was Jewish and her family fled from Eastern Europe in the 1920s, which is in my family background as well.”

“We’ve talked about this a lot, the idea of family, whether that’s family that you’re connected with at childhood or your musical community, which definitely feels like a continuation of that,” says de Groot. “We both work with a lot of musicians that are from different generations.”

That sense, for these two young musicians, really came to a head in the isolation and disconnection of the pandemic, heightened some by it then having to cancel a couple of attempts over the course of a year before they were able to get together to make this album. That itself played into the nature of the music they made when they finally were able to do it last summer, and in some non-music elements that provided threads for the music. The latter stemmed from conversations in the fall of 2020 with Phil Cook, who produced the album sessions in Portland, Oregon, where Hargreaves grew up.

“He started being in on sharing of tunes,” says de Groot, who was born and raised in Winnipeg, Canada. “He made an offhand comment that he was getting ‘grandmother energy’ from one of the instrumental tunes. And that led us down this rabbit hole, and he was asking us, ‘Do you have any recordings of your grandparents?’ We started looking around, which was a really special experience, because it put me in touch with some of my family about getting recordings.”

They got them. The voices of Hargreaves’ grandmothers Sylvia (born in 1925 in Brooklyn) and Jean (1930, Detroit) and de Groot’s grandmother Shirley (1929, Winnipeg, though sadly she passed away in March 2020) all are heard on the album’s penultimate song, “Ostrich With Pearls,” an otherwise instrumental written by Hargreaves. (The title? “It came from a poster that a friend had sent me,” Hargreaves says, laughing. “It’s an ostrich wearing a pearl necklace.”)

Sylvia talks about the house in which she was raised and how her grandfather converted the basement into a giant bird cage. Jean, recorded by Hargreaves’ uncle and limited due to dementia, reminisces that her favorite bird is a cardinal. And Shirley tells of her childhood car rides with her grandparents around Lake Winnipeg, having to roll up the windows due to the dust and gravel kicked up by the tires.

And while de Groot’s other grandmother died some years ago, “Hurricane Clarice” starts with a recording de Groot’s cousin made of her great-aunt Tillie speaking in Ukrainian — a language she had not used in many years.

“I asked her to tell a story about my Nana, so that she would be represented on the album as well,” de Groot says. “And she sent me this tiny clip where she just said, I think it translates to, ‘Sophie was a very good sister.’ It’s really sweet.”

While that emotional core of the album took shape during the separations of recent times, the seeds for it were planted some years back. The two met briefly in the late 2000s as adolescents at a festival in Victoria, British Columbia, when Hargreaves and her brother Alex were playing with multi-instrumentalist and multiculturalist Bruce Molsky, a mentor to both her and de Groot.

They started playing together regularly in the mid-2010s in the Boston area, where de Groot was attending Berklee School of Music and Hargreaves was at Hampshire college in Amherst, studying ethnomusicology — her thesis was about fiddle camps. Today, Hargreaves lives in Durham, North Carolina, where she is a fiddle teacher and graduate student in library sciences at the University of North Carolina.

“We had a really strong musical connection,” says de Groot, who just moved to Vancouver, British Columbia, this year. “Pretty soon after we reconnected in Massachusetts, we ended up being at a festival together. And there were all these festivals and we were both with different projects, but we were always excited to find each other and play for hours and hours. And then we decided to record an album and started doing some live shows.”

The first album captured the excitement and spontaneity of the nascent partnership, but for this one they wanted to take that further — once they were able to get into a studio together. The sessions happened during the Portland’s historically brutal heat wave last summer. That put climate change very much on their minds as they created Hurricane Clarice. And that, in turn, further intensified and illuminated the connections running through the album.

“It’s the whole feeling of apocalypse, and I think highlighting family and community within the setting of climate apocalypse,” Hargreaves says. “We connected this album to different notions of family, like our grandmothers, and thinking about what we can learn from our ancestors and also being together. And this project really helped me through the pandemic, meeting [on Zoom] with Allison every week and feeling like our duo as a family. Adrian Maree Brown, who’s an activist and author, asks the question about what compels us to survive climate change. I don’t know if I have an answer for that, but I think about it a lot and definitely community and family is what it all comes down to in the end.”

Editor’s Note: Hargreaves and de Groot will be featured in the Bluegrass Situation Presents: A St. Patrick’s Day Festival at New York’s New Irish Arts Center, participating in an opening night jam session with fiddler-banjoist Jake Blount and traditional dancer Nic Gareiss on March 17 as well as headlining the event’s closing night March 19. Enter the giveaway to win a pair of tickets.