ARTIST OF THE MONTH: Humming House 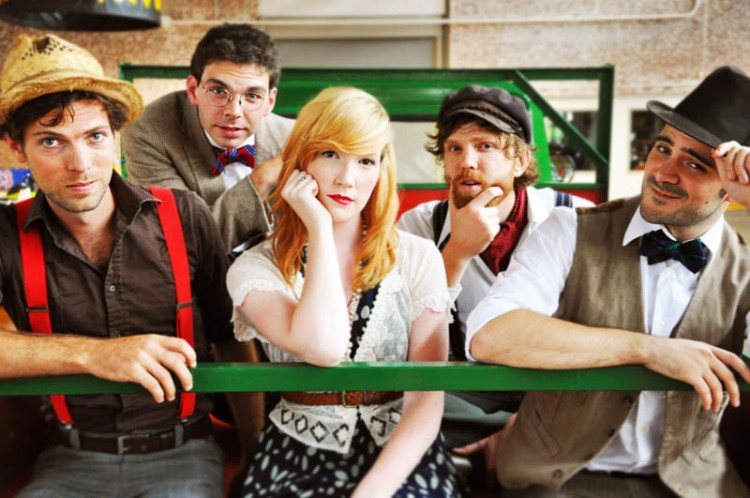 In the wee hours of a mid-September night, at Nashville’s legendary Station Inn, a young, hip-looking quintet took to the stage.  The audience was growing sleepy; in the midst of a non-stop schedule at the Americana Music Association conference, the remaining patrons had already been through an impressive lineup that night, from emerging bluegrass charmers Della Mae to gospel greats The McCrary Sisters, to class-act Steep Canyon Rangers…. and now this final act.  Such a lineup would be near-impossible to top, and the free-flowing pitchers of Bud Light were making everyone’s eyelids heavy.

Suddenly the rousing opening licks of Cold Chicago woke everyone up with a start.  The band, Humming House, quickly demonstrated how a barely-recognized name that had been in existence for less than a year got placed into such a prestigious, competitive lineup.  And from that moment, everyone knew they were watching an emerging, exciting piece of the Americana landscape (though, as vocalist Kristen Rogers and frontman Justin Wade Tam explained later, you can tag them as any genre you’d like….).

The group is made up of Justin, who serves as bandleader, lead male singer, guitarist, and primary songwriter; Kristen, with her powerhouse pipes and percussive skills; Joshua Wolak on mandolin, with his bluegrass and folk pedigree (‘String pickin’ and harmony singin’ kill me.  Best sounds ever.’); and Benjamin Jones, a bass player with a background in classical, jazz and punk rock — three genres that blend together into the backbone of the band (a fiddle player also occasionally joins the lineup).  The Sitch recently sat down in Nashville to learn more about our latest ARTIST OF THE MONTH…

Kristen:  my mother was a singer, and she wanted both me and my sisters to sing a lot.  I was the one that kind of took to it.  THus began my pursuit of singing, which was followed by many many years of study and obsession.  And thus bore the beast.

Justin:  I think it was in seventh grade they required an elective, and I hated art, but guitar was the other option.  So it all stemmed from there.

How this whole Humming House thing got started was we all independently moved to Nashville.  I came out here to attend a music business program, and that was the perfect way to convince a business-minded father that I could still be in the music industry, but have a business degree as well.

I didn’t play out much in college, but decided at the end of my college expereince that I wanted to start writing.  Was in a folk duo for a couple of years, and after that faded wasn’t sure if my next project would be a solo one, or if I should start a band, or really what it would be.

The catalyst for this whole thing was I bumped into this producer, Mitch Dane, here in town, and he really liked my songs, and we decided to do a one off tune — that’s how Kristen got involved actually.  I brought them in to play on this track, and that song ended up being our first single Gypsy Django.  I was convinced pretty quickly that we needed to do a record with Mitch.  We went into the studio, brought in Ben (on upright) and Josh (on mandolin), and the day we were going to start recording Mitch called and said he couldn’t be there because of a family emergency.  But he called in a favor to his partner, who happened to be Vance Powell (producer for Jack White and Third Man Records).  So that was a bit unnerving — walking into the studio to do your first record and there’s Vance.  The whole plan just went out the window.  But it all came together.

Because Mitch and Vance took the project so seriously, in turn we took it more seriously.  And in the end we come out with a record that was probably better than any of us expected.  And the chain of events have just snowballed from there.

Justin:  I kind of draw from all over.  I listen to a lot of roots music, but I’m originally from Southern California, and an indie rock background.  But guys like Paul Simon and Ryan Adams are really who I look to when it comes to songwriting.  Really lyrical, narrative writing.

The songs on this record also document where I was at the time:  between bands, working a full time job, about to get married — there was just such upheaval and change happening in my life.

Kristen:  We were actually talking the other day about what kind of band we peg ourselves as, and how we market it, and you know, whoever wants to claim us can claim us.  We’ve gotten rockabilly, Americana, Irish folk, even bluegrass, even though we’re clearly not a traditional bluegrass band at all.  But that’s just more people that can be into our sound from their own perspective.

Kristen:  Currently the album is hitting it’s year birthday.  We’ve been writing a lot lately, preparing for a new album, hoping to start on that in the new year.  We’ve done lots of touring in our first year — over seventy dates.  But we’re going to keep on the road, and especially when we have a new album

Justin:  It’s definitely been a good year.  We’ve had some really nice things happen — being showcased at the Americana Music Fest here in Nashville was a good thing, we were featured on the NPR Americana sampler, American Songwriter, No Depression, and Folk Alley have all been kind to the first album.  And we’re working on building up our audience in the southeast — we have a good base in Nashville, but we’re focusing on building

Kristen:  And I would say there’s a definite musical excitement about this era we’re entering.  Our first album was largely Justin’s project which we all played on.  But since then we’ve really become a band, and the next record will be much more of a collaboration on our songs.

You can learn more about Humming House at their website www.HummingHouse.com