ARTIST OF THE MONTH: The Howlin’ Brothers 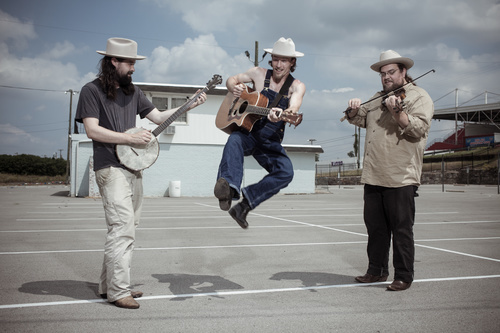 It’s been about a decade since THE HOWLIN BROTHERS (who are brothers only in the sense that all of us humans are brothers and sisters) started making music together. Hailing from locales as dissimilar as Wisconsin, New York, and Nova Scotia, the trio met when each of them were studying classical music at SUNY Ithaca. Though they had markedly different musical backgrounds, they started jamming together in various lineups and finally realized they’d struck gold when they sang three-part harmony on an old time tune during bassist/banjoist Ben Plasse’s senior recital.

Soon after graduation, Ian Craft (banjo, fiddle) and Jared Green (guitar, harmonica) moved to Nashville where they started making a go in the old time and greater acoustic music scenes. After developing a fierce picking party habit, they met up with Brendan Benson – producer, former Raconteur, and owner of Readymade Records – who called them up to pitch in on a Corey Chisel album. He dug the trio so much, he signed them on to Readymade and took them into the studio for a several weeks-long album-crafting adventure.

The result is Howl, a disc so universally appealing in its fierce energy and overall acoustic prowess, it can only be called Americana. There’s bluegrass in there to be sure, but also Dixieland and old time spirit, and everything in between. It only barely just released on Mar. 5, and has already generated some serious buzz. That bodes well for the band, who will be storming SXSW and hope to be heading to Europe before the year is out. Eager to get started on wherever this disc and its trail of buzz leads them, Plasse filled me in on how it all came together…

How did you get hooked up with Readymade?

BP: Our friend is a local artist who we play a lot of old time music with – just jamming around town. Somehow Brendan got a hold of Ian and Jared…they were looking for some guys to play multi-instrumental stuff on a record for Corey Chisel. Ian and Jared got to play on like half of Corey’s record. Then at the end of that, Brendan [Benson] said “I love you guys. Let’s make a Howlin’ Brothers Record!” And we said “Yeah, game on!”

You had already been together for ten years?

BP: Yeah, we’ve all known each other for about ten years. We went to college together in New York and we were all music students up there. Jared and Ian moved down here about six years ago and they quickly started playing together as the Howlin’ Brothers. I was their roommate but I was on tour doing sound for musicals and stuff. I came home from tour one time and it just happened that I was interested in taking time off and doing other things…it all just kind of came together.

Did you say you were touring doing sound for musical theater?

BP: Yeah, I was doing sound for a show called Avenue Q and another show called Rock of Ages.

Do you find that, as a sound guy, you get hung up on how the mic sounds or what other sound issues are going on? Or are you able to just let go and play?

BP: I try to let go of that. Especially because, in the theater, I learned it’s a completely subjective thing. I’d run into a lot of situations where two people who directed me would tell me two different things. One would want me to take it louder and one would want me to take it softer, and I’d just be like it’s all the same. I’d prefer to let the sound guy do his job. If we have a really rough night, we’re going to be somewhere else the next night, dealing with someone else. As long as they don’t blow your hearing out by the end of the night.

When I first listened to Howl, I automatically assumed you guys were from lower Appalachia. It sort of blew my mind to learn you were from New York and Nova Scotia and Wisconsin. Of course, there are all these Americana artists coming from Seattle and London, but you have an authentic Southern sound to you. How did that happen?

BP: I don’t know. I think we love all these [musicians] and we just kind of mimic them. For me, personally, it started at this festival called GrassRoots. It’s a festival with a lot of zydeco and Cajun music and bluegrass. It’s not just one genre…that opened my mind. We were all classical music majors. This is a very different concept, but there’s something about the way it grooves that feels so much more like us.

So you grew up studying classical music…was that festival the first time you explored acoustic music?

BP: Well, it had always been in the background of my life. Especially growing up in Nova Scotia, [the musical] tradition is really close to the Appalachian thing. It’s all the same people who just got on a different boat. I was working sound at the time, so I was getting exposed to a lot of it. When Ian and Jared moved down here, I was right behind them. I was like, I’ve got to go see what’s going on there, learn a couple of chords, you know.

How do you keep that authentic spirit in a town like Nashville? Stay on the East side?

BP: We actually live out by the airport…I don’t know. I think you just really have to love what you’re doing.

What did you do differently on this record from the stuff you self-released before?

BP: There are a lot of differences. This is the first record I’ve played on with them. For budget reasons, the other albums were spread out over time, there were different musicians coming in and out and playing with them. I think this one was a really focused thing. There were more people there, more hands on deck to put ideas out there. Our friends Wood and Wire from Austin, Texas, came up and played on it. Gregg Stocki, who’s a great drummer in town…it was fun. It was a real collaborative effort.

EXCLUSIVE FREE DOWNLOAD:  Take a listen to the Brothers’ track GONE from their new album HOWL

Find out more about THE HOWLIN’ BROTHERS at their website thehowlinbrothers.com.