Béla Fleck and the Flecktones Forge Their Own Path 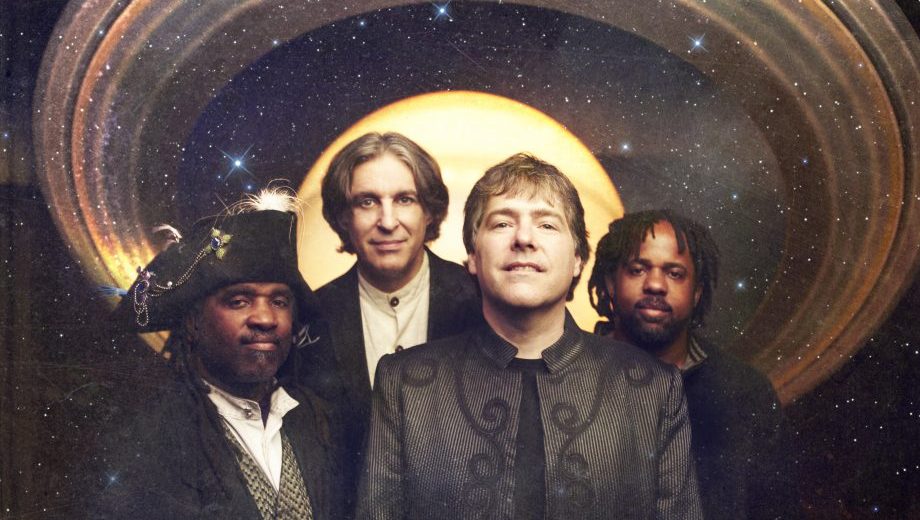 Just the day before, his Nashville house was filled with them, as well as with a few dozen kids. It was the 6th birthday of the eldest of two children of the three-finger-style banjo maestro and his clawhammer-style counterpart, frequent recording and touring partner and wife Abigail Washburn.

But the days surrounding this have also had a party vibe. He’s been in rehearsals with his cohorts in the beloved jazz-and-way-beyond Flecktones, in preparation for a tour marking the band’s 30th birthday.

“They’re the same guys they were when I first met them,” he says, speaking from home. “Curious, interested, ever-expanding, ever-pulling me with them. There’s a very special bond we have together. I’m realizing it more and more as years go by, one of the great relationships in our lives, musically and personally.”

They’re even pulling out such rarely played and decidedly difficult gems as “Jekyll and Hyde (and Ted and Alice)” from the band’s second album, 1991’s Flight of the Cosmic Hippo. It’s challenging and exciting, enlivening the qualities that made this alchemical combo of characters special from the very start. Futureman, he says, is an “empath and enabler — musical enabler, brings consciousness underneath you.” Victor Wooten too. Levy is “the crazy ideas on top. He’s the brains of the outfit.”

Fleck’s role? “Somehow I thought I was the heart of it, limiting it but making it more understandable for the common man — I was the common man in the band, surrounded by these crazy guys.”

But with a moment to reflect on their collective history and achievements, he finds descriptions of the magic they work together to be elusive.

This is where the balloons come in.

“It has to have heart, has to have melodies, some harmonies,” says Fleck, who turns 61 in July. “Couldn’t just be a groove or a shred-fest. That’s the power of the band. The tunes are strong, good things to pour everyone’s musical power into. Like a balloon. It’s an empty piece of rubber. But these tunes I’d written, we filled them up with Futureman and Victor and Howard — the balloons get real handsome. With the balloons at the party, it occurred to me that you fill them up and they become joyful. That’s what this music is.”

They’ll be sharing that joy on the road now, including two shows of particular import. This 30th anniversary tour began with a big “Friends and Family” kickoff May 30 at Red Rocks near Denver, the friends and family here including Washburn, saxophonist Jeff Coffin, Dobro genius Jerry Douglas, and the Colorado Symphony. And on June 8 they will be taking a cherished headlining slot at the Hollywood Bowl’s vaunted Playboy Jazz Festival.

The Playboy slot is, to Fleck, a particularly meaningful recognition.

“It’s one of the neat things to being around 30 years,” he says of that booking. “From the start I was begging to play it and they said, ‘Yeah, we’ll put you on at noon’ and we’d play once every four years or so. Now we’re in the headlining slot and we’re legacy artists.”

Sure, the Flecktones have had several albums go to the top of the jazz sales and airplay charts and they have won two Grammy Awards for contemporary jazz album, with Outbound in 2000 and The Hidden Lands in 2006. And last year the band was given the prestigious Miles Davis Award by the Montreal International Jazz Festival. And Fleck has found himself partnering regularly on recordings and tours with some of the greats of jazz, one in particular in an ongoing partnership. “I’m playing with Chick Corea, which is ridiculous, on a regular basis,” he marvels, having just returned home from a tour with the ceaselessly groundbreaking pianist.

But, while belated acceptance in the jazz world is frustrating, he understands. See, banjo is pretty much standard in any jazz band… in 1919. In 2019, not so much. Even after 30 years of forging a path for banjo in modern jazz, Fleck remains singular. Asked about others doing anything comparable today, he’s kinda stumped.

He cites New Orleans’ veteran Don Vappie, but he’s generally in the mode of traditions going back to those earliest years of jazz. There’s Matt Davis, a converted jazz pianist who’s on the faculty of the University of Michigan. And there are others who use some jazz chops and sensibilities while not strictly playing that style of music, notably Tony Trischka, Noam Pikelny, Alison Brown, and Pat Cloud.

Not to mention that the Flecktones as a whole is anything but standard jazz, with a truly eccentric approach and reach into a lot of styles. The 3-CD Little Worlds set from 2003 showed a boundless range that felt to some at once excitingly delightful and confounding.

On the other hand, not fitting in any category is par for the course for Fleck. He’s made a career of it, holding the record for the most categories in which he has been nominated for Grammys, 16 total. The most recent win is a best folk album trophy in 2016 for Béla Fleck & Abigail Washburn.

He’s a charter member, he quips, of the “Modern American Attention Deficit Disorder Musicians.” There are really only two others he’d put in that association: Jerry Douglas (whose fusiony Jerry Douglas Band may be the only thing out there comparable to the Flecktones) and Chris Thile (who’s resumé runs from Nickel Creek to ongoing collaborations with classical cellist Yo-Yo Ma and jazz pianist Brad Mehldau).

There’s one side of his musical hexadecagon he’s underserved for a while now, though. Ironically, it’s the one that first brought him fame when he emerged as a precocious New York City musician in the ‘70s and ‘80s.

“On the bluegrass side, people go, ‘Whatever happened to Béla Fleck? He could have been a great bluegrass player.’” he says. “Someone told me he had heard that. That was when I was at the top of my game, selling out stadiums with the Flecktones on tour with the Dave Matthews Band.”

Well, it has been 20 years since his last true bluegrass album, the on-point-titled The Bluegrass Sessions. And the one before that, the breakthrough Drive, came in 1988, a year before the Flecktones genesis. Well, as it happens, Fleck has a new bluegrass album in the works with a cast of musicians including such longtime buddies as Douglas, mandolinist Sam Bush, Jerry Douglas, bassist Mark Schatz and fiddler Stuart Duncan (all of whom were on the 1988 album) and a mix of fellow veteran stars (bassist Meyer, mandolinists David Grisman and Chris Thile) and relative newcomers (fiddlers Billy Contreras and Michael Cleveland, mandolinist Dominick Leslie, and guitarist Cody Kilby).

“Now the years have gone by and I didn’t have a place for bluegrass to fit in,” he says. “But I had these tunes burning a hole in my pocket and thought I would really love to have a place for them. These sessions have been a knockout. These are hard tunes. And we’re having a blast. It’s as good as I’d hoped.”

The results will be out sometime next year. But first there’s this Flecktones balloon to float.

“One thing I will guarantee you is you will never hear anything else like it,” he says. “There is nothing else like the Flecktones in the world. I promise that. And I am very proud that were are that, and that we are back together.”