Between the Lines: ‘A Horse with No Name’ 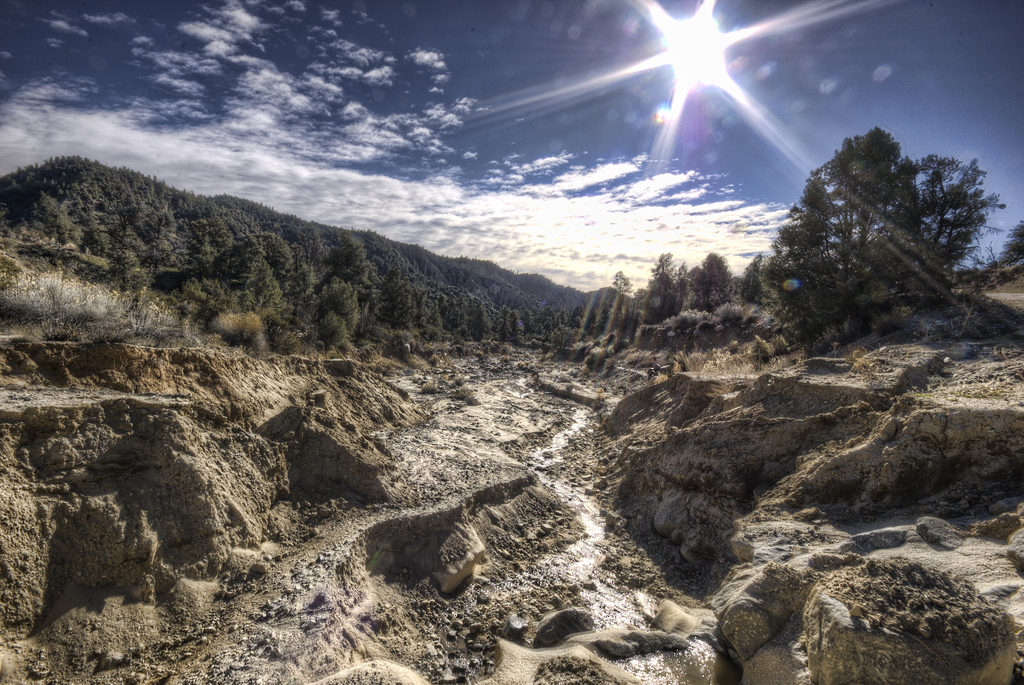 On the first part of the journey, the part before my wreck and the horse and getting lost and things, I actually got a lot of work done. I'd been out in the Mojave Desert for three days collecting samples of lizard droppings for my doctoral thesis at the University of Paducah. Late in the late morning of the fourth day, I was looking at all the life there around my camp. There were plants and birds and rocks and things, and things that looked like rocks but turned out to be some really pristine samples of male Sauromalus ater droppings. Feeling like it's best to go out on top, I decided to head back to Paducah that day. I figured I could get to Tucumcari by midnight, and home late the next day.

I collected the last specimen, broke camp, and drove back down the one-lane desert road toward the state road and I-40. I was so excited about finding that Sauromalus scat that I mistakenly took a left at the fork instead of a right. I didn't realize this for a while, when there was sand and hills, and I felt like I'd been driving in rings around the desert. The road had narrowed to a track, with a hillside on my left and a dry riverbed to the right. This is the beginning of the second part of the journey. In attempting to back the truck up the track, I hit a soft spot and went off the road and rolled down the embankment 20 feet into the dry riverbed.

When I came to, the first thing I met was a fly with a buzz, and he was right in my face. The truck was on its side and there was the sky with no clouds through the broken passenger window. The heat was hot and I couldn't see out of my left eye. The ground was dry against my shoulder. The truck wasn't running, but the air was full of sound. The sound of thunder. I unbuckled myself and climbed out of the wrecked truck, and saw my precious lizard dung samples scattered around in the sand. I looked up when I felt the first heavy raindrops, and saw that the sky was dark and moving fast. Lightning flashed, thunder broke, the wind came up, and it began to rain in hard sheets. Water was flowing around my feet. I tried to carry an armful of specimens up the slippery bank to the road, but fell and dropped them all into the muddy torrent. Very soon after, the truck and all my work and belongings was swept away by the flood.

That's when I saw the horse. He was down the road 50 yards or so, standing and looking at me. He was black, with a white blaze on his forehead. I looked around, didn't see anyone else, and when I looked back he was walking toward me. The rain had let up and there was a little blue sky in the west, and a bit of sun coming through. The horse walked up, looked down at the water, looked up at me, and kept walking down the road in the direction I'd been heading.

"Hey Mr. Ed!" I called. He just kept walking. "Trigger! Velvet! Scout!" Still no response. "Hi ho, Silver! Pharaoh! Clover! Festus!" I followed along as he walked up the track, trying every name I knew. "Applejack! Pony! Ulysses! Major! Daisy! Babe! Gypsy! Patches! Dakota…" Eventually, I was running out of names, and I realized that we'd walked quite a distance and I was completely lost. "Virgil! Moonbeam! Bocephus! Feydra! Jake!" He stopped and looked up at "Jake." I'd done it! Then I realized he'd only stopped because a jackrabbit had run by. I started to think he might not have a name.

What would I tell my colleagues? That I've been through the desert on a horse with no name? They would certainly laugh at that. "Every horse has a name," they'd say. Well, regardless, it felt good to be out of the rain and I eventually gave up trying names on him. In the desert, they say because of the dry heat you can remember your name easily, but I think it's 'cause there ain't no one for to give you no pain in the ass about what your name is.

I kept following the horse, figuring he knew the way out of the desert.

We came out of the hills and down onto the plain, where there was a little grove of trees with a spring of cold water. I filled my canteen and the horse had some grass, as horses do. He then continued on across the desert, and I followed. After two days in the desert sun, my skin began to turn red because, of course, I hadn't grabbed my sunscreen from the truck before it washed away. After three days in the desert "fun,"  I was looking at a riverbed that had run dry. We had stopped in the shade of a mesquite tree to rest. I noted how wide the riverbed was, and the story it told of a river that flowed here made me sad to think it was dead, or dry at this time.

After nine days of this, I finally figured out he didn't know where he was going, as well as having no name. So, I let the horse run free, because the desert had turned to sea anyway, and I was sure I was near Encinitas or somewhere. There were plants and birds and rocks and things here, too, but different species and geology, of course.  There was also sand and hills here, and the surf is so loud it rings in your ears. In a way, the ocean is a desert with it's life underground, or actually, I meant to say, underwater, and with a perfect disguise above. Back in civilization, under the cities lies a heart made of ground and concrete and wires and pipes, But the — we — humans will give no love to this heart/ground continuum.

I eventually made it back to Paducah safely. I sit here in my lab and look out over the leafy campus and wonder about that horse, and if anybody ever figured out what his name is.

Story by Freedy Johnston based on "A Horse with No Name" by America. Photo credit: Neil Kremer / Foter / CC BY-ND.