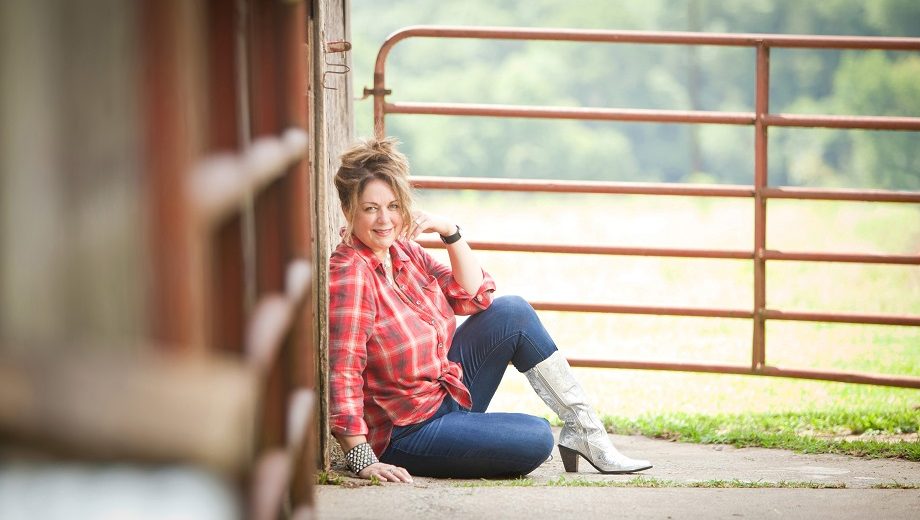 Artist: Donna Ulisse
Hometown: Hampton, Virginia
Latest album: Time for Love
Personal nicknames (or rejected band names): Lots of family and friends just call me “Da”, which didn’t work so well for me when we were in Russia doing some shows because da means yes in their language so I was always turning my head in big crowds, thinking someone was calling me! My band members sometimes call me by my initials: D.U.

My dad and I have always had a major crush on Loretta Lynn! From as far back as my memory will go, I have admired her sassy songs and her way of delivering them. In my world, she is and will always be the cat’s meow. It took becoming a serious songwriter to realize that I also loved her writing. When I was young I didn’t give much thought to who wrote her songs, I just simply loved them. As I matured in this business I was struck by how many of the artists I adored actually wrote their own songs and Loretta was at the top of the heap.

When I started my journey into the bluegrass genre, my first producer, Keith Sewell, hit the talkback button in the studio after we cut a song I wrote called “When I Look Back” and said he thought I wrote like a mix of Loretta and Dolly. I didn’t touch the ground for two weeks after that. What a wonderful compliment! Loretta’s influence is certainly pronounced throughout my song catalog.

This one is easy! I was 12 and I was asked to sing one song at a popular venue in Mathews, Virginia, called Donk’s Theater. The show was loosely patterned after the Grand Ole Opry, with a staff band that would help spotlight young talent and I was one of the fortunate recipients. My mom and dad were SO excited! They invited all kinds of family and friends, probably thirty or so. The week before the show dad took me out shopping; I’ll never forget it. He let me buy a Gunne Sax dress that reached the floor. I thought I looked just like Loretta Lynn. I twirled in front of my mirror for hours when I got home and used my hairbrush to practice holding a microphone.

The night of the show is still so clear. The place was packed and the spotlights were incredibly bright. I was given a generous introduction and I walked out and sang a Loretta Lynn song, “Somebody Somewhere,” to the top of my lungs. I loved it, every moment, smell, sight, clap, note… all of it. Years later, my Aunt Helen told me that my mom and dad lost all their color when my name was announced and never blinked or swallowed while I was on stage, bless their hearts. I guess I didn’t have to be nervous, Mom and Dad did that for me.

In all honesty, I knew I would be on stage when I was very young, maybe 5 or 6 years old. I have never dreamed of another career, it was always going to be the stage for me. But if you want to know the exact moment my star was born, it would be that Loretta Lynn song I performed on the Donks stage when I was 12. I owned it and never looked back.

I’ve never been good with homework, but I believe the topic of my mission statement would be perseverance! I have never given up on my dream of performing, even through the darkest of times. I was one of the blessed when I was signed to Atlantic Records in the early ’90s. A major country deal is a huge accomplishment and much coveted. I was out in L.A. doing a Dick Clark show when I got the call that I lost my deal. It was brutal, heartbreaking. I was so lost in those days but I knew deep down there was a place for me to sing.

I turned my heart and hopes into songwriting and it saved my music life. Through songwriting I discovered the mountains that lived in my soul and I started writing Appalachian sounding tunes that led me into this warm and wonderful world of bluegrass. I am having success in this business a little late, but so very cherished and appreciated. This is the world I was always meant for and perseverance got me here!

My husband and I bought a little farm outside of Nashville a few years ago. I’m not your typical farm girl but I love this land. It has a sweeping field that leads down to a creek and I spend lots of time watching goats and cows and all the changes that spread across the field. In the spring, vibrant yellow flowers show off the new season like a Sunday hat. In the summer there is so much purple bursting out all over the tall grasses, reminding me of an Irish hillside. In the fall there are elements that look like a harvest, like a bounty was laid there though we don’t plant anything, and in the winter the field lays there like temptation and whispers for springtime. This is where so much of my inspiration is found these days. I write about the spirit and the glory and the life that I see from my table on the porch.