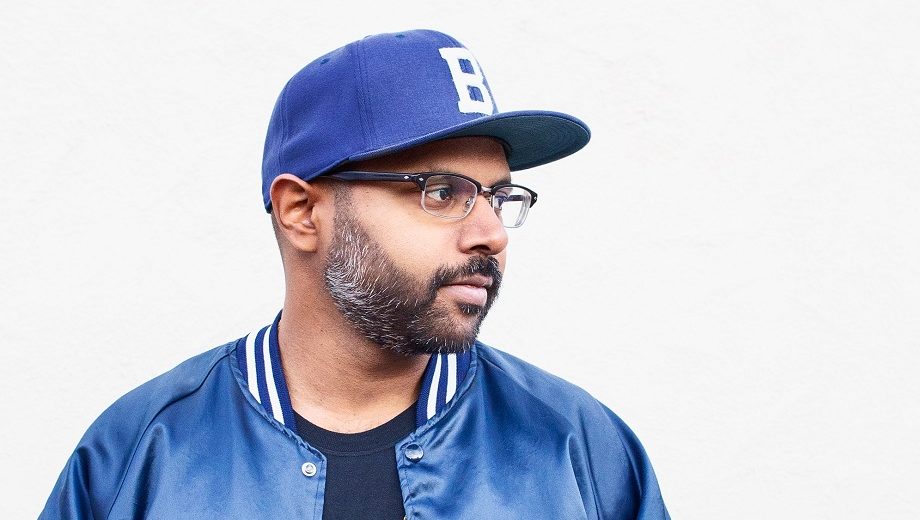 Bhi Bhiman is a curious man, which is easily discerned by listening to his most recent undertaking, Peace of Mind. Each week he is releasing a podcast episode that explores layered topics like voter suppression and immigration in tandem with a song from his new album. He sets the record straight on his own story, lets the listener in on a behind the scenes look at his music, and gives us the kind of civics lesson he wants to hear. The episodes come together in a confluence of storytelling, humor, and in-depth conversations with some of the nation’s leading doers and thinkers, such as Dave Eggers, Glynn Washington, and former Superior Court Judge LaDoris Cordell.

It is easy to wind up lost in the abyss of the streaming era for an independent artist. When faced with another potential album release with no record label support Bhi says, “Necessity is the mother of invention. To me, this was a necessity in that I wrote an album that I thought was worthy of people’s ears. It was a political album and I didn’t feel like I could reach people just by releasing it independently. With the podcast, I can completely control the narrative.”

I just saw on Twitter that you and your wife jointly came up with this idea. Was there a “Eureka!” moment for this project with you two?

Bhi: Well, the thing is, obviously podcasts have been really booming recently. I guess that as we get older, people in this generation start to listen to podcasts more, rather than listen for new music. Podcasting is the Wild West completely right now and literally, you can do whatever you want to do and that can be good or bad but I think what we are doing is pretty good and unique.

I had written this album about a year ago and we were talking about how to release the album and it was very political. The album came about before the podcast idea. Each song has a different theme. It is very cool to sit down and talk with someone who is doing these things. It is more about what is going on overall and in a much more relaxed setting just because we are just chilling and talking and usually I’m the dumbest guy in the room.

I’m trying to create something I don’t see. Kind of a 30,000-foot view of what’s going on. If you watch the news, you’re getting this micro look at what is going on that day, that minute. What I’m doing for each episode is, I’m releasing a new song each episode and so basically I’m breaking down the song and I’m using stems or little sub-mixes. You might only hear the drum and bass underneath the interviews. I’m using them to help the storytelling along and that was something new that I had to learn.

I love that device because once you get to the song you feel like you’ve lived in it for a second. It feels familiar already.

That’s what I wanted I’m hoping people are like, “Oh yeah! That’s the thing we’ve been hearing the whole time.”

Do you know ahead of time which interviews are going to go for which songs or are they more generalized?

Well sometimes if it is more of a celeb kind of person I have an idea of, “Oh I think they can fit in here.” However, those talks are usually pretty broad so I come in with an idea and I come out with another idea. Dave Eggers is in the first episode and we have such a broad talk that I think he’ll pop up in a future episode.

On the flip side of that, these lawyers and people working within the government that I’ve talked to…I’ll just give an example. There’s a lawyer who’s fighting Trump on the Emoluments Clause. I spoke with him and that was very focused. Sometimes it is very clear cut because their job is involved with the theme of the episode more particularly.

You are providing so much to your listener and you are acting as creator, as journalist, as biographer, and in some ways as your own critic. What are your hopes for the audience as they peel back all of these layers?

It has two sides to it. It is a vehicle for my album, however, the explanation of the song and the actual song itself comes at the 20- or 25-minute mark. Really I want it to be a great podcast for everyone. It is a civics lesson, is kind of the dumbest, simplest way to put it. But not a boring one. That’s obviously a huge part of it. It needs to be entertaining.

And these people who work every single day on these issues, whether it is activism or they are lawyers or judges or journalists, they know the long arc of what is going on that people in my position don’t know, so that was a huge draw. Talking to these people I respect, it is part of the draw. It is a bonus for my fans but it is also for new fans and people who don’t even give a shit about my music. I want them to still like it too. It is kind of like my contribution to civic engagement in a small way.

To cover so many heavy subjects, there’s some really funny stuff sprinkled throughout this record. With “Can’t Nobody Stop Us” and “From Russia With Love”, you are inhabiting the characters that you are seeking to shed light on, in the tradition of artists like John Prine, Curtis Mayfield, and Warren Zevon. What does that device allow you to explore?

It’s like a juicy, bad character in a TV show or movie where you are like, “That must have been fun to play.” There’s something to being the bad guy where it can free you up to be a complete asshole, in a way. The people I choose to do that with are some of the worst people around. For me, it is more entertaining and for the listener, I think it can be a better way to understand how this human might work rather than seeing the flip side. I always bring up Randy Newman songs. He wrote a bunch of very misunderstood songs because he was being very satirical and I’ve had that problem with past albums. With the podcast, I can kind of explain that a lot better and there is no misunderstanding about that.

This project deals with a lot of issues that incredibly dire but there’s some clear hope woven throughout all of it. What is giving you hope right now?

If you compare what the landscape looks like now to what it looked like in January 2017, it is remarkably different. It seemed very dire. It felt helpless. I think America has responded so great in so many ways over the last few years. You realize how many smart and passionate people are working super hard. Either they are weekend activists in their spare time from their nongovernmental, nonpolitical jobs, and then some of the people on the frontlines–like the lawyers. When you break laws that lawyers can go to court and plead their case and it isn’t about public opinion anymore, and when it is about facts to a judge, that is one of the great hopes here.

I’ve talked to a lot of lawyers and all of them have been so steely. They all have a lightheartedness to them, in a way. I don’t even know how that is possible to deal with this stuff all the time but they all have this long view. I played a lot of baseball growing up and if you bat 300, you’re good. That means you fail seven times and you still keep your head up, you know? The people who succeed are the people who keep their heads up and don’t get down on the lawsuits or whatever and they don’t even hang their hats on the wins so much. They are even-keeled. They are literally moving the needle incrementally here.

Editor’s Note: Peace of Mind Podcast with Bhi Bhiman is produced by the Critical Frequency Network. New episodes available every Friday on Apple Podcasts, Stitcher, Spotify or wherever you listen. The songs from the episodes also available for streaming and download.