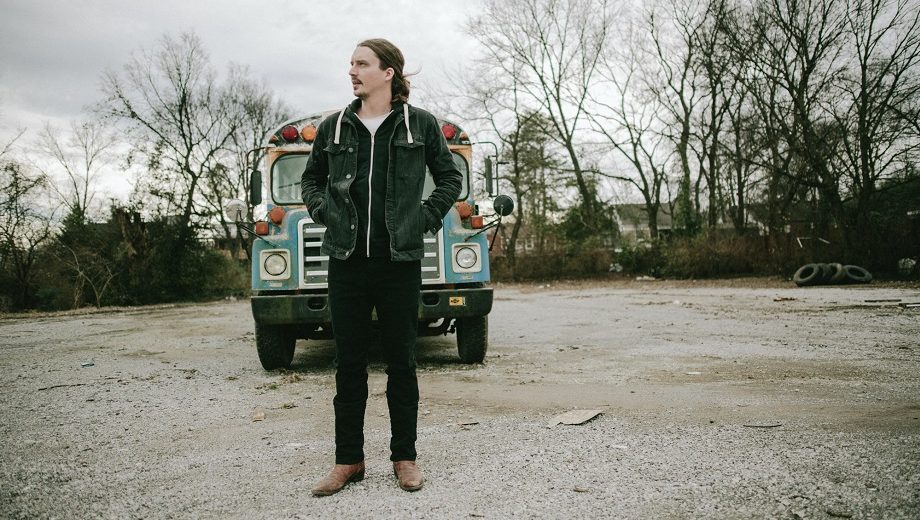 Caleb Elliott’s Forever to Fade is a truly unique artistic statement, one that combines cinematic string arrangements with Muscle Shoals-inspired grooves. It’s a musical hodgepodge in which you can hear everything from hints of ’70s soul (“Makes Me Wonder”) to what Elliott calls “my little Harry Nilsson moment” (“Try,” a forbidden love song that features some cheeky whistling).

But those sounds weren’t ones he grew up listening to. His parents were followers of The Message, the teachings of evangelical faith healer William Branham, whose 1961 Armageddon prophecy reportedly inspired cult leader Jim Jones to set up his Jonestown settlement the following decade. This strict religious upbringing meant there was no TV in their house and secular music was strongly discouraged.

“I would venture to say no, I was not allowed [to listen to secular music], but the technically right answer was I could do what I want, it was just very frowned upon,” Elliott explains. “And especially like the churches we were going to, it was very frowned upon. We were guided towards the contemporary Christian realm, which was as rock ‘n’ roll as it got for us. Switchfoot was my Beatles, you know, in high school.” He laughs. “Sad to say. I probably shouldn’t be telling you that. I didn’t really get exposed to the good stuff until a little later.”

Raised in Louisiana, Elliott started playing the cello in third grade and “it sort of became my little kid identity because no one else played the cello, and I wasn’t bad at it,” he explains. But his real exposure to pop and rock music didn’t happen until much later in life.

“I remember going off to college and my taste in music was still very, very underdeveloped,” he continues. “I was on a long arc of discovery. I don’t feel like I started listening to really, really good stuff until I was in my twenties, even after college. I mean, I delved a little bit into the Beatles but I dove more into like Neil Young and Bob Dylan when I got more towards my mid-twenties—really when I started hanging out with better songwriters and that’s who they were listening to. And I was like, ‘Wow!’ I started to get it.”

For the past seven years or so, Elliott has made his living as a sideman, touring with the likes of Nicole Atkins, Dylan LeBlanc, and Travis Meadows and becoming a string-section staple at Single Lock Records, the Alabama-based label and studio co-founded by The Civil Wars’ John Paul White and Alabama Shakes’ Ben Tanner, recording with White, Lera Lynn, Donnie Fritts, and more.

Being surrounded by songwriters and spending time with them on the road and in the studio not only helped shape his musical tastes — Elliott says it also informed his own songwriting style.

“I don’t think there’s any way for it not to,” he says. “People ask about influences a lot. It’s a really common question, but I think for some folks, your greatest influences are the people you spend time with, and I think that’s been the case for me. The way I approach songwriting and just everything has changed a ton since I’ve had the opportunity to tour. And then touring led to more studio opportunities, and I’ve been able to be around people who have been doing this at a high level for a long time. And it’s had a huge impact on me in a lot of ways. I don’t think there’s any substitute for it. I’ve always been envious of the cats that grow up in this, you know. It’s a level of understanding of the whole thing that’s innate for them. For the rest of us, we’ve gotta go out there and figure it out.”

One spin of Forever to Fade and you’ll be able to tell he’s already got it figured out. And while the arrangements may be what came to him first (“I’m always thinking about a string line,” he says. “Always.”), the album’s lyrics are equally important to Elliott.

“Get Me Out of Here” tells the story of a love triangle, each of its three verses centered around one of the three characters involved. The title track deals with the feeling of being trapped or stuck in a bad relationship. And while he notes that these situations aren’t necessarily autobiographical, Elliott says much of the record is inspired by unhealthy relationships he’s witnessed.

“A lot of these songs on the record are inspired by dysfunctional relationships or needing to push through to a better place in your life and making hard choices, like whether or not you want to move forward or keep dealing with it,” he explains. “I think the title itself lends itself really well to that because for people who are caught up in those unhealthy relationships, it feels like they’re gonna be there forever and there’s nothing they can do to get out cleanly.”

Ultimately, he hopes that people going through a similar situation in their own lives will be able to hear Forever to Fade and feel understood.

“Recently I did a house concert and I got on this little spiel about how sad songs are better,” he says. “Happy songs are great, but you can’t commiserate with a happy song. There’s just more depth of emotion on the other side of things I think with sad songs, and whenever you find something like that that you can latch onto, it can help you get through what you’re going through a lot better than a happy song could. And so hopefully maybe somebody out there is going through something in their life that this helps them get through.”

He adds, “Dysfunctional relationships can be tough, you know. Letting go of people that you loved, or that it hasn’t been a healthy thing, or standing your ground on things in your life. Coming to terms in those ways can be very difficult, and maybe somebody will be able to find some hope in here. That would be really nice if it helps them get through a hard time.”

Working with Single Lock on the record was always Elliott’s top choice, he says, but he never presumed that a deal with them was a foregone conclusion.

“It was never a given on that level,” he says. “However, I’ve worked with Ben a lot over the past several years as a cellist. I’ve kind of been his go-to guy for the strings, and so when it came time for me to pick someone to record my songs with, he’s always been my favorite engineer and producer to work with, and I feel like he’s one of the best I’ve ever worked with. So that was the obvious choice for me, to ask him if he wanted to help me record my record. Down the line, after we got it kind of going, apparently there was a conversation between a couple of the guys at Single Lock about basically asking Ben what he’s been up to. They had a sit-down listen and they kept coming back to a couple of my songs. That’s when they sat me down and said, ‘Hey, we really like what you’ve been doing. We’d be interested in helping you put this out.’ It was sort of an organic thing.”

Elliott says that connection to his music on that level is his ultimate goal, but for now, he’s focused on getting it out there and in the ears of as many people as possible.

“More than anything my personal goal is to tour my butt off as much as possible,” he says. “I’m hoping this thing gets going. It’d be really cool. I’m a lifer, you know? This is what I do. And I’ve been very fortunate that I play the cello and that’s been able to lead to a lot of sideman work. I’ve played cello and guitar and background harmonies for people, but it’s such a treat to be able to sing my own songs.”