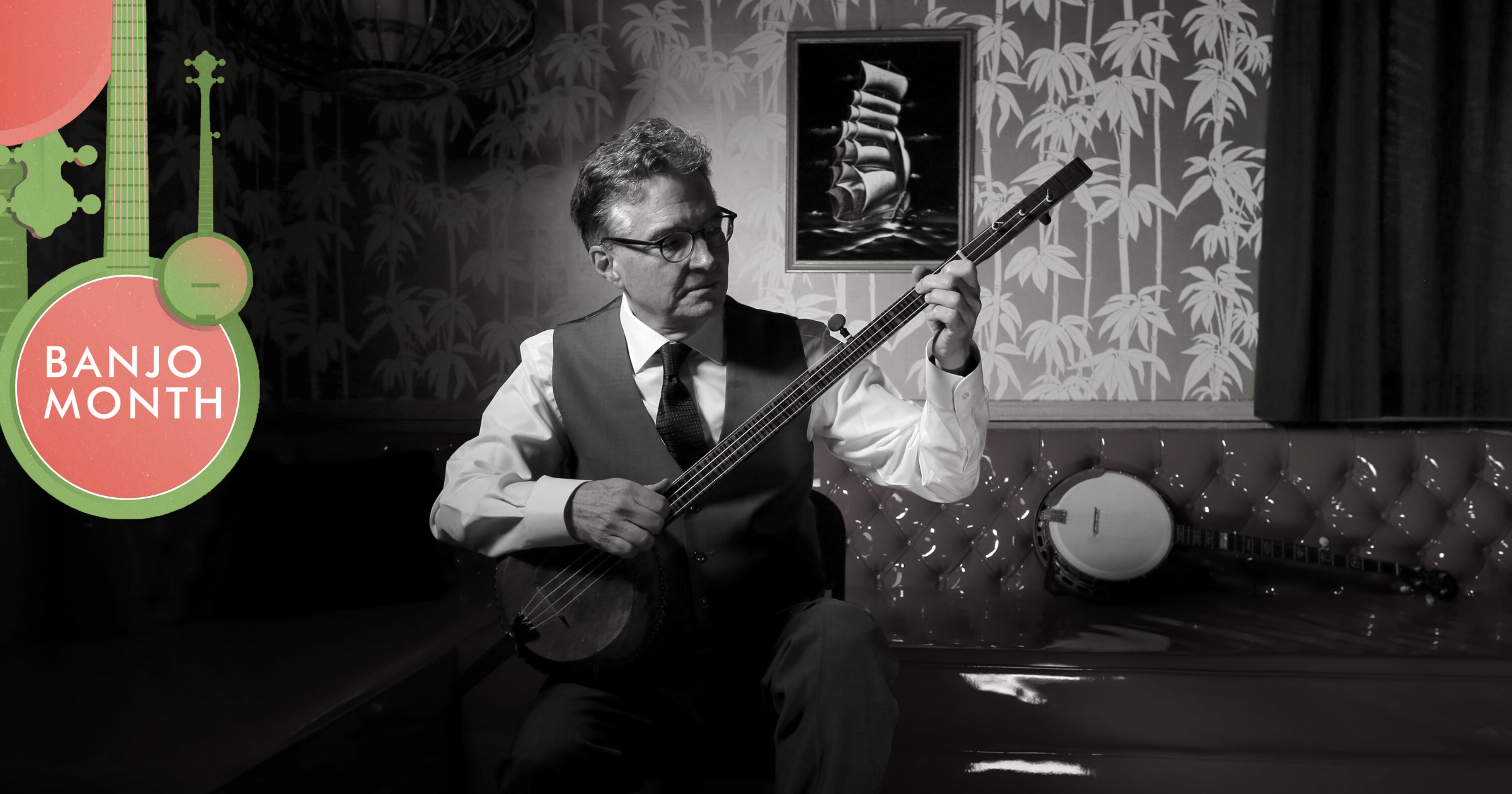 As a scholar and a musician, Bill Evans is deeply committed to sharing the complex historical context of the banjo while maintaining a musical style all his own. As a professional player, he specializes in bluegrass music; but one need only talk to him for a few minutes to understand that his influences stretch far and wide, encompassing everything from The Beatles to composer Frank B. Converse.

What started out as the concept for a dissertation became an ever-evolving musical show centered around the five-string banjo as a tool of what he describes as “African- and Anglo-American musical and cultural exchange.” When Evans began working with Tiki Parlour Recordings, this project took on a new form. His Banjo in America project covers more than 200 years of banjo history. Every element of this DVD & CD set honors the complexity of this history. The richly detailed liner notes, the graphic design, the photographs, the wide variety of instruments used, and the track list together form a cohesive package that is a righteous testament to the multifaceted history of the banjo. BGS was honored to talk with Evans about the conversations happening in the roots-music community regarding this instrument.

BGS: When did you start playing music?

Evans: I grew up in Norfolk, Virginia. I had piano lessons from a woman who played organ at the local church, and that laid the groundwork for my understanding of the basic concepts of music. But I usually tell people that the event that changed my life was the Beatles on The Ed Sullivan Show. I was only 8 years old, but I have this vivid memory of the entire world looking different after that, and I was intensely interested in music from that point on. I started looking at acoustic guitars, and back then you could go down to the local music store and get a Peter, Paul and Mary book with guitar tablature. I started that in the fifth grade, and if the chord was too hard for my hands to wrap around, I just didn’t play that chord.

I learned fingerpicking, and then, when I was in high school, a music store opened in Norfolk called Ramblin’ Conrad’s Guitar Shop & Folklore Center. I started hanging out there. You could listen to records, and you could play instruments, and I ended up being mentored by musicians who were all older than me. I had albums to listen to and supportive people and a coffee house on Friday nights where we could go and perform. I was fortunate to have, at a crucial point in my life, a nurturing environment that directed my learning. I was already into bluegrass banjo, and at every folk festival I got exposed to lots of different music. John Jackson. Tracy Schwartz. Mike Seeger. Libba Cotten.

Did you come from a musical family?

No. What got me interested in the banjo was a television show called Hee Haw. It was hosted by Roy Clark and Buck Owens. They had a routine every week where Roy and Buck would play “Cripple Creek” and tell jokes, and they also had a banjo segment. I could see Roy Clark picking, and I could visualize and hear the relationship between what I was doing to what I needed to do. I’ve heard from other banjo players that it was the sound of the instrument that got them; that’s true for me, too.

Having a supportive community to help me to funnel my learning was very helpful. By the time I got to college at the University of Virginia in 1974, I was well on the way and was consumed by it. By then I had a sense of how to seek out sources and make musical connections, both with other students and with the local pickers. There was a coffeehouse in Charlottesville called the Prism. My suitemates were all doing rush for fraternities, but I was hanging out at the Prism, getting to hear all these performers, and working on banjo.

I would spend hours and hours practicing, and then I started working at theme parks. A lot of young players got their first professional experience through those venues. I was pretty much set to be a professional musician. I graduated in 1978 with a degree in anthropology and religion. I played the whole summer with a band based out of Louisville, Kentucky, called the Fall City Ramblers. I was on my way and I’ve never looked back. I’ve made my living and raised my kids by being a professional musician all these years, and I’m almost 66 now, so I feel blessed.

How did the Banjo in America project start congealing into a cohesive form?

I’ve been interested in banjo history for a long time. In the late 1980s and early 1990s, three events were held by the Tennessee Banjo Institute. There have always been specialists in these styles that I’m exploring. There are folks who specialize in “minstrel banjo,” mid-19th-century banjo. Other folks specialize in what we call “classic banjo,” which encompasses the music of the ragtime era. The Institute brought in the experts in those styles. Pete Seeger, Béla Fleck, musicians brought from Africa. A lot of us got exposed to these historic styles and made these connections through the sound of the instruments and the knowledge that these incredible musicians brought to the events.

Early on in graduate school, I was thinking about writing a dissertation on…I’ll use the word “Africanisms.” That dissertation that never got written was on the continuing African influence in all of these banjo styles. There are a lot of things going on with a project like this, but I want to be clear that I’m always recognizing the African and African American influence. This project is coming out at a time when we’ve been talking about this process of appropriation and revitalization for several years, and we’ve got great Black performers playing the banjo and spreading the word about this history.

In the mid-1990s, as a result of the Tennessee Banjo Institute, I bought a mid-19th-century banjo replica. Then I bought an open-back banjo and I started digging into these manuals. And I started accumulating more instruments as I went. It was a continual process of getting instruments, exploring the styles, coming into contact with people at banjo workshops, and continuing to learn, continuing to talk to folks who had written about all this. As time went by, I realized that I needed to make the show more entertaining. I wanted to make it appropriate for a general audience. I try to make it an entertaining show where people can come out having gained an understanding of the complexity of the cultural exchange over hundreds and hundreds of years. In some ways, the story of the banjo is the story of America.

What was your process for contextualizing these tunes and this project?

It’s a wonderful moment right now, the way the younger people who are playing old-time music are looking at this whole process of African and African American and Anglo-American exchange. I think of this as an ongoing dialogue in which we’re all hopefully learning from each other, gaining strength from one another, and being inspired by one another. I’m hoping that this project is a contribution to the dialogue. The more that we can hear these historic styles, the richer our comprehension can be of the nature of the cultural exchange. The more we can understand the history of the banjo and carry that to a broader vision of all of us playing the banjo, all of us celebrating the banjo, and using it to transcend some of our cultural divisions.

In addition to presenting all these historical styles, I play things the way that I play them. Many of the pieces on this recording I’ve been playing for over 30 years, and the whole project is the result of my involvement of over 50 years with this community. If this project can contribute in some way to the dialogue that’s going on about white appropriation of what’s essentially Black music, I will be very happy.

How do the graphic design and visual elements of the album fit in, and how did this aesthetic element come into being?

I let Howard [Rains, the graphic designer] and David [Bragger, co-founder of Tiki Parlour] run with it. There was a tradition in the 1800s of creating a “toy theater” – a very elaborate miniature stage cut out of paper. It’s three-dimensional, and you put actors on the stage, so we started off with that idea. I didn’t have a whole lot of input. I did choose the photographs. They got very excited about it, and I did, too. It’s this blending of sensibilities that is kind of remarkable.

That leads perfectly into my last two questions. First, how many instruments do you play on this project?

Ten, and among the oldest banjos is the zither banjo from England, on track number nine. And the Vega White Lady, which is from 1917. The gourd banjo that starts the project is a modern-day interpretation made by Pete Ross, and the three instruments that I’m using for the mid-19th-century portion of the program are made by Jim Hartwell. So, these aren’t the real deal, but they’re really close in specs and sound to instruments that exist in archives.

Second, what’s your favorite track on the set, if you have a favorite? And why?

“Home Sweet Home,” the sixth track. This is an 1871 arrangement. It’s astounding, the degree of technical expertise that was written into this piece at such an early date. The composer, Frank B. Converse, was partly responsible for bringing fingerstyle playing to banjo music. Louis Gottschalk arranged “Home Sweet Home” and Converse lifted the arrangement. I have added to it as I’ve gotten to be at home with the piece, which is definitely technically demanding. So that’s the piece that I like the most because it encapsulates a lot of things for me…and it’s fun to play.