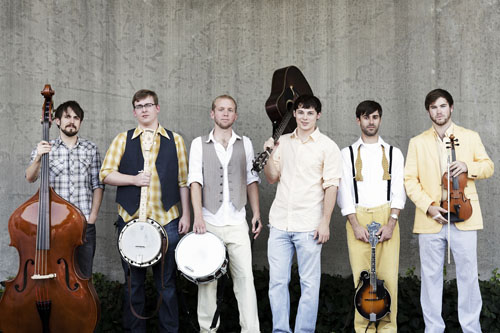 How did Seven Handle Circus come together?

We all met at Georgia Tech actually. Most of us were in a fraternity together and we just started playing acoustic music on the front porch of our fraternity, and that’s kind of how the band formed. We had all played music with each other and different little groups and things like that, but we finally started to pick up some bluegrass instruments and just play on the front porch.

When I turned 21 I got banjo for my birthday and we were like, ‘maybe we should play a little bluegrass.

Typically when you go into a party at a fraternity on any campus you don’t expect to walk in and find a bluegrass band playing. So we agreed to play this party and we kind of had to step up on our game a little bit. We wanted [people] to stay so that’s what kind of led us into modernizing our sound a little bit and song-writing, and adding in elements of drums and electric bass and even playing rap songs and things like that kind of all came out of that audience with this party atmosphere that carries into our sets today.

Are you keeping it kind of Atlanta that way?

We try to keep as much local influence involved as possible, but we’ve done a Dr. Dre song.

Mhmm. Are you all from Georgia originally?

Pretty much. Mostly all raised in Georgia, from our elementary school days on.

What drew you all together with that kind of instrumentation and sound?

The instrumentation of bluegrass is really versatile.  I mean, the violin and fiddle can, if used, can be in pretty much every genre. Guitar and bass as well. Ya know, the mandolin, a lot of rock bands include it—REM used it all the time. As well as classical if you look at Punch Brothers and Chris Thile.

Plus there are so many different sounds to work with. I just love the diversity of uniqueness and fullness of the bluegrass instrumentation.

Another thing is we recognize the virtuosity of bluegrass playing as something to aspire to. We all grew up learning classical music and jazz and were looking for a style of music that had a similar kind of virtuosity to aspire to. I think it’s intrigued us a lot… not saying we’re there.

What out of the ‘grass catalogue were you aiming for.  Bluegrass in particular, generally speaking, starts with imitation of traditional tunes, before people start doing their own stuff…

We definitely like a lot of traditional tunes, a lot of Bill Monroe stuff and Bela Fleck early on and Newgrass Revival. Chatham County Line… we actually got a chance to play with them in Greenville. Everything Chris Thile’s done. Starting out I was really into Ralph Stanley and Earl Scruggs and the Dillards. I listened to all three of those a ton, but I’d be lying if I said I didn’t listen to a ton of Old Crow Medicine Show too.

Where did the band name come from?

We were going back and forth on the basic framework of what we wanted.  It’s like a slot machine….  Three words and you pull the lever and—‘Seven. Handle. Circus. Ah, brilliant! That’s it.’  Rolls off the tongue a little bit.

Actually at one point had registered Seven Handed Circus.  We played before Mumford & Sons at the Fox Theatre in Atlanta.  They talked about us during the set and mistakenly called us Seven Handed Circus—which doesn’t make sense because we have a lot more hands than that.

We didn’t correct them.  We just immediately registered the domain— and got a lot of hits. So it all worked out.

You can learn more about Sloane, CFR, and Seven Handle Circus here or at sevenhandlecircus.com (and in case you were wondering, their link to sevenhandedcircus.com still works too…).