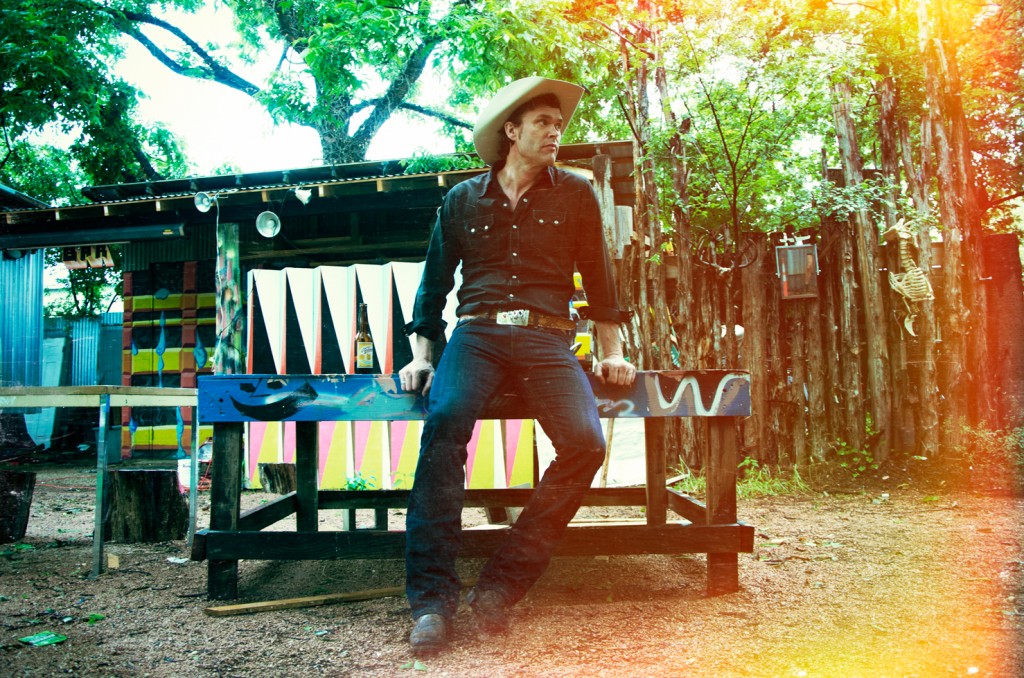 Corb Lund sings songs about cows, cowgirls, whiskey and ranch life. If you’d assumed his honky tonk-based music is a product of growing up in the west, you’d be right. But it isn’t western America, it’s western Canada. Alberta to be precise. And Lund is proudly Canadian. His backing trio is the Hurtin’ Albertans and his song catalog includes tunes like “Alberta Says Hello,” “Long Gone To Saskatchewan” and “Chinook Wind.”

North of the border, Lund is a big star, racking up a JUNO award (Canada’s Grammy equivalent), 11 Canadian Country Music Associations awards and a pair of Canadian Gold albums. Americans are still getting to know Lund. His recent Los Angeles appearance at a crowded Mint, however, suggests that Lund is gaining a following since New West Records has released his last two albums, 2009’s Losin’ Lately Gambler and this year’s Cabin Fever.

Performing songs going back at least a half dozen years, the lanky Lund wore more than just a cowboy hat – musically speaking. His set included numbers like the hard country rockin’ “Counterfeiter’s Blues,” the Western (Canadian) Swing-y “Cows Around,” the rockabilly rave-up “The Gothic Girl I Know” and the military ballad “Horse Soldier, Horse Soldier” as well as a cover of Merle Haggard’s “Ramblin’ Fever” into which he injected “Jackson” and “Oh Canada.” Lund and his band (guitarist Grant Siemens, bassist Kurt Ciesta and subbing drummer Falcon Valdez) delivered a wonderfully diverse set, packed with plenty of heart and humor, that showed that their twangy tunes about bars and farms, girls and gravediggers erases any differences the 49th Parallel might create.

Lund’s skill at mixing wit and wisdom recalls such Americana singer-songwriters like Robbie Fulks, Todd Snider and Hayes Carll. The Carll comparison is particularly apt as Carll and Lund have toured together and collaborated on the terrific Cabin Fever tune, Bible On The Dash.” The two also are part of the joke-y “vanity” project, The Ego Brothers. At the Mint, Lund played a couple Ego Bros tunes – “Ain’t Enough of Me” and “I Wonder What All The Ugly People Are Doing Tonight” – which made one hope that a full set of comically egotistical ditties can be done.

Lund recently took the time to answer some questions for Michael Berick about his songwriting, performing live and hockey.

Cabin Fever has a rather eclectic range of styles, was that something you did on purpose or just how things turned out?

LUND: Well, I get bored easily. Also, I’ve always admired writers whose records didn’t sound the same start to finish. I’m a believer in dynamics on an album scale, as well as within a song. The same things that can be achieved within a song using volume, tempo and arrangement can be accomplished within an album using sequence, stylistic variety and things like that. My favorite artists have eclectic records and I’m very fortunate to have a versatile and talented band that can go anywhere I take them stylistically.

How did the time you spent traveling to Austin, New York and Las Vegas affect how this album turned out?

LUND: Well, “September” is pretty obviously about a girl in New York, so that was a pretty specific correlation. I’m not sure about the rest, other than to say that all that drifting might have made me more apt to spend time secluded in my cabin afterward, which is where some of the stuff got written. I’m lucky in that if I’m in writing mode, my ‘job’ allows me to travel or live pretty much wherever I want. Although in this case it may have been a bit more wander-y than deliberate.

Is there a particular song that you are proud of how it turned out or just one that you especially look forward to playing?

LUND: Yeah, “Gettin’ Down on the Mountain” was a nice surprise and it’s super fun to play live. You just never know how they’re going to turn out. From where it started on acoustic guitar and where it ended up, produced all raw, with Grant (Siemens)’s gnarly baritone riff was a pretty unexpected journey. It’s one of those songs that continues to try to teach me the lesson that you should always be brave and give everything a shot when it’s recording time, even if you’re not sure they’re any good. This one, and “September” were ones I didn’t expect to use, and they turned out to be some of my favorites. And the audiences’ also, so far.

You are known for doing a lot of touring. Do you prefer playing live to recording or do you enjoy doing both?

LUND: I much prefer playing live. Making records is a necessary diversion, although sometimes it’s fun and interesting. Mostly I got into this racket to sing for people in bars, that’s my favorite thing. In fact, the actual art for me is the 90-minute interaction between me and the audience. The records and the shows wouldn’t happen without that. I make records so I can tour, not the other way around, which is the reverse approach in the music biz often.

Your music reminded me of Hayes Carll’s even before I learned of your collaboration with him. Since you grew up in Canadian ranch country, do you feel a kindred spirit with Texas and Texas singer-songwriters?

LUND: Sort of, but when I first started going down there, I expected to see and hear Western music on every street corner. I grew up as a cowboy kid in the Rockies and I was shocked to find that Western music is pretty rare these days in Texas. My buddy Doug Moreland restored my faith in that. But yeah, I feel pretty comfortable in Texas. And Hayes has become a really good friend. We’ve toured together a ton, in the States and in Canada. I believe we’re plotting a British Invasion soon, too. He’s been a big help. I’ve had a lot of Texan buddies help me out in the US. I’m grateful that they’ve sort of adopted us into their scene down there. It’s a great thing.

Are there other musicians who you would like to collaborate with?

LUND: I’d like to at least meet Kristofferson at some point. And I’d kinda like to try to write something with the Dresden Dolls.

Now that you have had two albums out on New West, have you seen a change in your audience reception in America?

LUND: For sure, the label has helped a lot in getting our name on people’s lips. The last record felt like it was our first knock on the door, and Cabin Fever seems like it’s walking into their living rooms a little bit. Funny, since those are our sixth and seventh albums. I keep telling people if I’m not careful I’m going to win the ‘Oldest Newest Artist’ award. But definitely, I can tell from reading the audiences that they’re more familiar with these last two than our older material. It’s the opposite in Canada.

Do you find many differences between audiences in Canada and America?

LUND: I find greater differences between Eastern and Western Canada than I do between Canadian and American western audiences, and that’s the area in the States we’ve been playing most the last couple years. It’s the cowboy underground. The difference is just that we’re better known in Canada, because we’ve been playing there longer. That and the health care options…

Are you working on any other projects now?

LUND: I’ve got a bunch of things vying for space on the front burner. I have a tribute album called Songs My Friends Wrote that I want to cut, made up of all my buddies’ best tunes. And Hayes, John Evans and I have a side band called the Ego Brothers that we want to get to work on. All we do is write about how awesome we think we are. I’ve also been toying with a bunch of songs about combat journalism and war correspondents but I’m not sure if that will end up being one song or eight at this point. No one steal my idea, please. It’s all designed to woo Christiane Amanpour, who I have a celebrity crush on. And the ‘Next Album’ never really goes away, so yeah, I have lots to think about.

And lastly, on a different note, if the NHL season doesn’t happen this year, what do you think Canadians will do to fill this void?

LUND: I don’t know. It’s going to make me go away, that’s for sure. I’ll find other things to do. It’s gross; it happened ten years ago, and they don’t seem to learn.  Rich people fighting with rich people. I personally hope it causes US interest in hockey to wane, leading to a contraction of the league and an improvement in the talent pool. I don’t think anyone really cares if there’s hockey in Florida.