CONVERSATIONS WITH… The Brothers Comatose 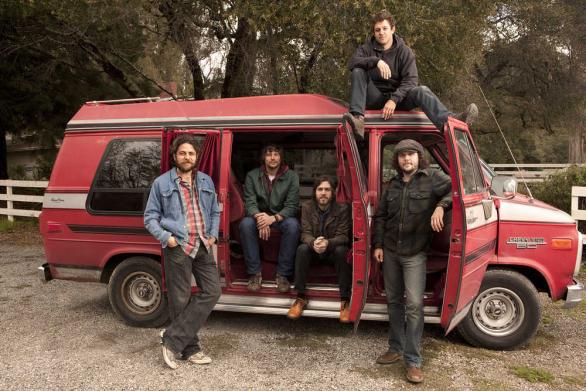 THE BROTHERS COMATOSE is a San Francisco-born band with a lifetime lineage of music and a “have-a-good-time” approach to playing live. Founding brother, singer and guitarist Ben Morrison took time out before their upcoming LA show at The Mint (appearing Friday, March 1) to share thoughts about chopsticks as percussion instruments, playing music while hanging upside down from trees and paying musical homage to a cherished touring van.

Your bio says The Brothers Comatose is an extension of the house parties that happened in your family home when you and your brother, Alex, were kids.

Ben: My Mom was in a band back in the day and they would rehearse at our house. We’d have these parties every once in awhile where all their musician friends would come over and just pass songs around, shouting out the chord changes, jamming and having a good time.

You and your brother and your bassist, Gio Benedetti, got into punk rock before landing back in bluegrass. Why is it you’re not still thrashing out three chords like you were when you were kids?

Ben: (Laughs) We got sick of carrying around amps and all that kind of stuff!

Actually, there were always acoustic instruments around. Alex always had a banjo hanging around the house and we always played different styles of music. We eventually settled into what we’re doing because it felt natural.

And there are no amps to lug around.

Ben: Exactly. And we don’t have to rent an extra van just to carry the drum kit.

From which era – the rock era or the acoustic era — did you get the name The Brothers Comatose?

Ben: It popped into my head one morning. It’s funny: whenever Alex really gets into playing the banjo, his eyes roll into the back of his head, like he’s in some sort of musical coma. I guess that’s where it came from, like was always in the back of my mind. And it’s stuck ever since.

‘The Van Song’ starts a little like the ‘Theme from Deliverance,’ with a traditional call and response at the beginning. The next thing you know you’re singing a love song to your van.

Ben: We have a semi-scary obsession with our touring van. It’s on the cover of our album, we wrote a song about it, we talk about it all the time. It has such great character to it. It’s a 1988 Chevy G20 conversion van. It’s red. It’s got a magnetic mustache on the front and it’s awesome. We all fit it in perfectly, with all our gear, no trailers, nothing extra. And it’s a super-comfortable ride. We joke a lot about it but we felt we needed to pay homage to our touring vessel.

Your bio talks a lot about maintaining an intimate relationship with your fans. That comes across in the video for ‘The Van Song’ but how do you do that on a big festival stage?

Ben:  When we started we were playing to just our friends, like, in a living room or at some dive bar. It was really easy because they were right up in our faces; it was almost like a punk rock show with them there clapping and stomping and everything.

I think we’re still learning how to keep that vibe as we transition to bigger venues. We do some goofy stuff at our shows, like handing out chopsticks toward the end of the set so the crowd can play percussion; you know, banging on glasses and all that. It’s great, though. Once they get into it, we get a pretty nice groove going. It’s another reason why we don’t need a drummer!

I have two questions about the video for “The Scout.” First, is that your fiddle player hanging upside down from a tree?

Ben: (Laughs) That is our fiddle player hanging upside down from a tree, yes.

Is there a story you’d like to share or should I move on to the next question?

Ben: Well, there isn’t much of a story, really. A friend of ours shot it for us. We thought up a couple of locations and rolled a bunch of video. Phil said, ‘Hey, I’m going to climb up in the tree and play upside down.’ It’s pretty hilarious that it made it into the video.

And those cats hanging around, listening to the music at the end of the video, look an awful lot like the hippie kids I knew growing up in the 70s. Is there some Laurel Canyon connection in your gene pool?

Ben:  I wouldn’t say we’re well connected with that scene but I guess there’s an aspect of it in what we do. And now that you mention it, there are a lot of similarities between the folk revival today and the music of the late 60s and 70s. You know, Old And In The Way and Jerry Garcia and all that.

“The Scout” came out of a songwriting collective, right?

Ben: These dudes from the band Good Luck Thrift Store Outfit put together this thing called “The 52-Week Club.” They send out a theme a week, a word or a phrase; you can use to inspire a song then you can share it on their website, if you want. It was the first one I did as part of that.

Your song with Nicki Bluhm, ‘Morning Time,’ is fabulous. Your voices match beautifully. How did that come about?

Ben: We were playing the High Sierra Festival up in Northern California. We could hear the music on the main stage from where we were camped out. I heard this band playing and the singing was amazing. Turns out it was Nicki Bluhm.

I had written “Morning Time” and was looking around for someone to sing it with me. I thought it would be awesome to sing with her but I didn’t know her. Then I found out my neighbor is friends with her.

He introduced us, I sent her a rough demo and she was into it. So we went down to her husband (Mother Hips member Tim Bluhm’s) studio and recorded it. We’ve toured with her recently so it’s been really cool to be able to play the song live.

You have some California dates going on, festival season is on the way. Any other plans besides just having a good time?

Ben: We’re going to try for a new album this year; we’ll be doing a bunch of dates on the East Coast; we have a lot of festivals lined up. Lots going on, lots of places to explore.

THE BROTHERS COMATOSE play The Mint in Los Angeles with The Ben Miller Band on Friday, March 1 for our next ‘The Bluegrass Situation Presents…’ show.  Tickets available here.  You can learn more about the band at their website TheBrothersComatose.com