CONVERSATIONS WITH… Trish Klein of The Be Good Tanyas 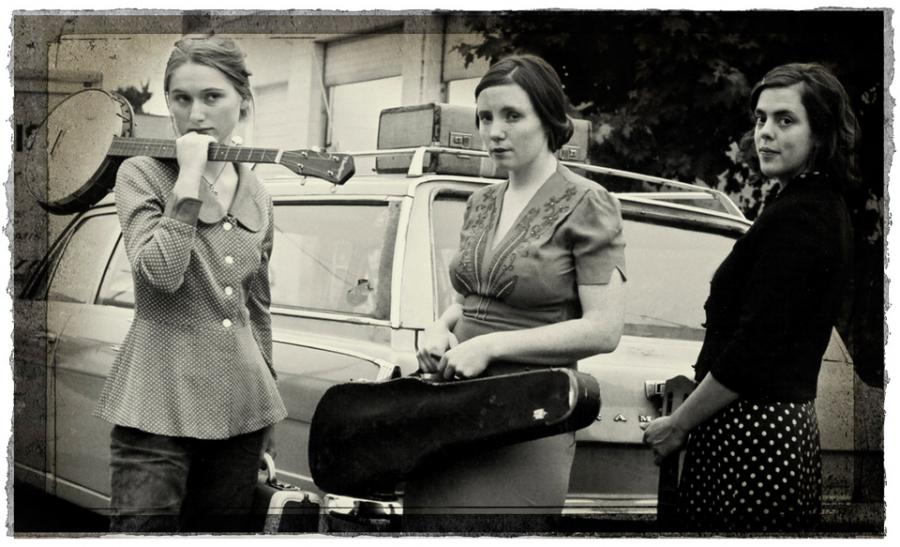 The Be Good Tanyas emerged in the late nineties, a product of the Vancouver old-time and folk musical communities.  Consisting of Frazey Ford, Trish Klein, and Samantha ‘Sam’ Parton, the group deeply established themselves in the Americana realm before taking a hiatus in 2008 to pursue solo projects and other work.  This year, the Tanyas have re-emerged with their retrospective album, A Collection, and a busy tour schedule throughout North America and beyond.  Engine 145’s Juli Thanki recently spoke to Trish as the band made their way down the coast, ahead of The BGT‘s upcoming LA appearance at the Bootleg on August 17…

What led to The Be Good Tanyas going on hiatus, and how did you spend that time?

After our third album, we were doing a bunch of touring, and I was also touring with Po’ Girl. I think we all just felt the need to do other things with our lives because we’d been so focused on the music that we’d put aside our other interests. We’re all multi-faceted people and everyone wanted to check out other things in life. So we really took time to focus on other stuff. Frazey worked on a solo album called Obadiah, which I collaborated with her on. She released that in 2010 and we toured that through 2011. It allowed her to explore more of her soul music and R&B influences – her songwriting sometimes veers in that direction or crosses over with her folk influences, and a lot of that material didn’t really seem appropriate in the context of The Be Good Tanyas, so she wanted to explore that and play with a different musical lineup as well. We recently did a whole concert with a horn section and Hammond organ. She recently got back from Memphis where she was recording with Al Green’s original rhythm section from the ‘70s. That’s going to be for her upcoming album, which is going to be all Memphis soul.

I’ve been studying art, doing ceramics, working on a history degree, and traveling a lot – I spent time in Japan and Paris.

Sam has been doing a degree in folklore and music ethnology. She’s living in New York City and recording different people. She has a band there called “Folk Face.”

It’s been a great time for us all to explore our interests. The time apart really helped with our relationships and our appreciation for the band.

How did you all choose the songs for The Collection?

We thought that since we were going to go back out touring and we haven’t been playing together enough to accumulate material for recording a new album, that we’d put together our favorites and some of our new songs on there to fill it out. It came together pretty easily: everyone wrote down their own list of what they thought we should include, and they were all the same list. We did tweak it a little bit – realistically, we wanted to include stuff from all three albums. It’s hard to do a favorites list that’s not really a favorites list, but we tried to include favorites while also including stuff that spanned the arc of what we do.

Tell us about the two new songs on the record.

“Little Black Bear” is a song of Sam’s. It’s really pretty. I think of it as being in the tradition of ‘70s country duets with an Emmylou Harris kind of sound. Sam mostly sings lead and Frazey does a lot of the harmony.

Frazey wrote the other song and was like “This is the first authentic gospel song I’ve written.” But she couldn’t think of a better title for it, so she just called it “Gospel Song.” It’s a beautiful gospel song and a mesmerizing live tune.

Over the band’s years together, what’s been the most memorable moment?

One of the highlights for me was getting to play the Royal Festival Hall in London. It’s a great venue that all the greats have played at: The Beatles, Led Zeppelin, everybody. It’s this giant, gorgeous, opulent room that was built for Queen Victoria, I think. It’s a sea of red velvet and gold filigree. That was probably the largest concert for a private audience we’ve ever played. It was a wonderful event.

We played a festival in Northern Sweden, in this fishing village that transformed into a ginormous rock festival. We got to look out our hotel room window and watch The Hives rock out for 20,000 people.

Before that festival, we played Stockholm. We were told we were going to do an in-store. Ordinarily, I think of an in-store as kind of a weird thing to do. We got to this cool little record store in Stockholm, that, just from this one store, sold over 1500 copies of our album. So when we did the in-store, the whole street was shut down. All the people that worked in those businesses came to our show. The store was packed and the street outside was full of people as well. I didn’t know we had fans in Sweden at all! When they said we were playing an in-store, I expected it to be like in-stores we’ve played in the past, where people are shopping while you play. But it wasn’t like that at all. Later, we’d be walking around in Stockholm and people would be like “You’re in that band!” We were famous after only being there, like, two hours.

There are a couple remixed tracks on The Collection. Why did you choose to remix those songs?

We remixed “Scattered Leaves” from Hello Love, which really didn’t get the treatment it deserved due to lack of time. We got around to doing a proper mix with it, and I’m very happy with it. We’re going to be releasing it as a single in the UK and also planning to make a video for it. I’m just going to make it on my camera and it won’t cost any money. It’s just going to be my friends and me, like a budget home video.

What’s next for The Be Good Tanyas?

We’re going to be in LA, Santa Barbara, Palo Alto, and just played a great festival in San Francisco called Outside Lands. That was pretty amazing because Stevie Wonder was headlining. We’ll be touring more in the fall on the West Coast and East Coast, maybe the UK in January.

Will you be going back to Sweden since you’re so huge there?

That was a while ago, but I hope they still remember us in Sweden! I want to go back

See what all the hubub’s about in Sweden and check out the Tanyas for yourself when they play the Bootleg Bar on Friday, August 17 at 9pm.  More info and tickets available here.