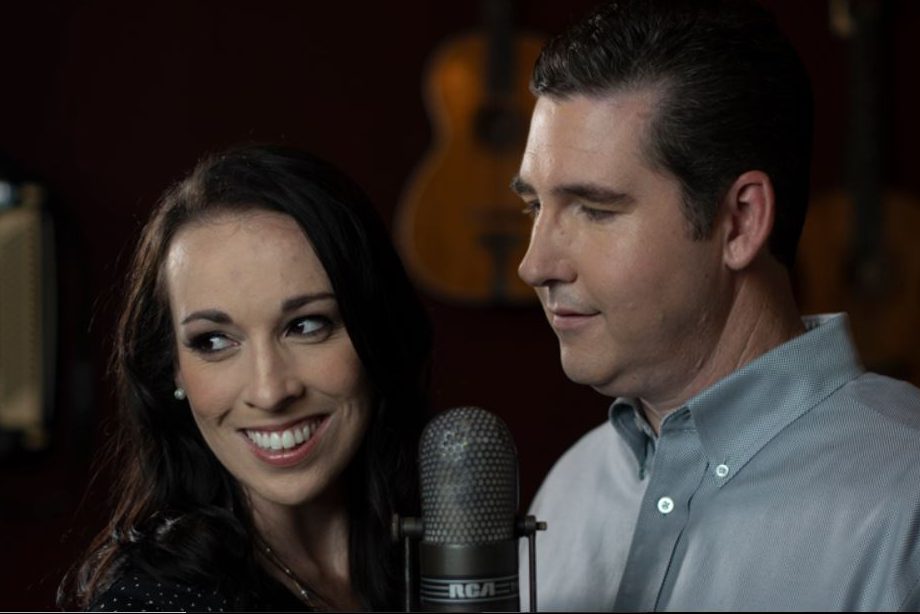 The first time they ever sang together, Darin and Brooke Aldridge harmonized on “The Prettiest Flower,” an old hymn familiar to any Baptist church. They’ve scarcely stopped since then, with their latest album Inner Journey placing their stunning musical blend at its center on classics like “Teach Your Children Well” as well as songs written by the likes of Kasey Chambers, First Aid Kit, and Nanci Griffith.

“Brooke and I have always been trying to develop our sound. On this one, we stayed true to our bluegrass roots in some of the material,” Darin says. “We’re more of a vocal band. We can base things around Brooke’s singing and our duet style and harmonies, and we want our songs to send a message out that speaks to us.”

Versatile enough to sing a Louvin Brothers song one minute and a Bryan Adams song the next, the married couple commands a musical vocabulary that nonetheless lends itself to bluegrass. Darin Aldridge co-produced the project — their first for Rounder Records and sixth overall — with Mark Fain. And on the afternoon following this interview, Brooke Aldridge picked up her third consecutive IBMA female vocalist trophy, indicating that their audience is on this journey too.

BGS: This album begins with “I Found Love,” which has a tie to Earl Scruggs, right?

Darin: It does. I listened to that on a plane ride back from somewhere in New England and I had my iPod with me and the Earl Scruggs and Friends record was on there, with Vince Gill and Rosanne Cash singing it. I just thought, “Man, that would be a good grass-up number right there for us.” It’s a pretty good tempo and a duet and it speaks to what I was just saying – about what I want to get out there, in our life and in our history, and what we want to go forward with. Then I got to looking at the writing credits and it was Earl and Randy Scruggs and our buddy Vince. That was perfect. That’s all we needed.

Brooke: It’s one of those positive songs that we set out to do a long time ago when we first started making records. We talked about how we wanted to have a positive and uplifting message in most everything that we ever recorded. Some people have told us down through the years that we weren’t going to do very well doing that kind of thing. But I think that’s not the case at all! We’ve done very well sticking true to what we love and what we believe in, in each other.

But when you hear a good heartbreak song like “Every Time You Leave,” how do you respond?

Brooke: Oh, gosh, you just realize how true those words are. Because just like “Every Time You Leave,” we’ve all been through hard relationships or hard times in our families where we’ve lost loved ones or things haven’t worked out quite the way we wanted. I think that really speaks measures to me when we’re listening to songs like that and trying to decide what’s going to affect somebody out there listening.

Darin: The harmony speaks to us as well. We got to do that song with our buddy Jimmy Fortune. We got to tour a lot with Jimmy in the last couple of years and wanted to get a good song that represented that out there on the road for our singing together, and it just comes perfectly.

I want to ask you about “Your Lone Journey.” I learned that from a Doc Watson record.

Why did you choose to include that song on here?

Darin: We got to visit Doc and become friends with him through MerleFest, through him being in North Carolina. A friend of mine took me up to visit him at his house about a year before he died. We’d been featured in Bluegrass Unlimited maybe a couple months before, and Rosa Lee brought the magazine to us when we got there. She said, “I’ve been reading about you all and glad that you all are here.”

She got to telling us the story of how she wrote that song. She was just sweeping in her kitchen, wasn’t she, Brooke?

Brooke: Yeah. And I think the words just came to her. She was sweeping and her and Doc arranged it, I guess, and made it theirs. What a great-sounding song.

Darin: Yeah, we sat there with them in the living room and talked about that, and he got to talking about Merle, and when he couldn’t wait to see him in heaven with his own eyes again. It is powerful, man. We just wanted to include that and it’s got an old-timey feel to it. Brooke’s got a really good mountain voice as well. It really fits.

Brooke: What Doc and Rosa Lee had brought to the music over the years and what they mean to us — we definitely wanted to include one by them. And it was funny because Doc kept saying that a lot of people title this song, “Your Long Journey.” And he’s like, “That’s not how Rosa Lee wrote it. It’s ‘Your Lone Journey.’” We made sure to get that right on this record.

Darin, have you been playing guitar your whole life?

Never put it down?

Darin: Nah, I picked up the mandolin when I was 15 or 16. My brother and his baseball buddies had a little basement band. They’d all get around — he was a drummer – and pick on rock music and stuff like that, so I slowly learned that. I’d listen to the tunes after they’d quit playing and I’d start figuring them out, so I could sit in with them. Then the next week or two, I’d learned the tunes better than they had. Then their guitar player would ask me, “How’s that really go?”

Darin: Yeah, all that stuff — ‘80s hair band stuff, I was big on [that]! Then I got to singing more in church as I grew and got into a gospel band through some buddies in the marching band. They went to church somewhere and said, “You play and sing — you got a banjo?” I actually had a banjo at the time but really hadn’t learned how to play it. I was like, “Oh, yeah, I can play banjo.” So I learned real quick, just so I could be in the band and start picking and singing. And I quickly moved to the mandolin after that. One of the guys could just play in a certain amount of keys, A and D maybe.

Ricky Skaggs has always been a huge influence and I wanted to do something I saw him do on the Opry, which was a quartet with a mandolin and guitar. Since we were singing in churches a lot, I wanted to do some of that material like Bill Monroe did. I recorded [the Opry] on a VHS tape, so I went upstairs with the mandolin and watched it. This song was in G, so I sat down and figured out the notes on the mandolin. I come down there to show it to him so he could play it, because I was the guitar player in the band. He said, “No, man, you just play mandolin.” [All laugh] So I just started playing mandolin from then on.

Brooke, did you start singing when you were around 12 or 13, too?

Brooke: Probably from the time I could talk, I started singing. My mom, my sisters and I used to sing in church. As I was getting a little bit older, my parents realized at an early age that I could pick up lyrics to a song just by hearing at one time. They started putting me in singing competitions. The school system where I was, in Avery County, used to have a yearly talent show. It would start out in the elementary schools, and if you placed first, second, or third you went onto the county-wide talent show and got to showcase your talent in front of everybody.

Those kinds of things, and doing community events and competitions all throughout my childhood, really prepared me for loving this more so when I got to adulthood. And so it’s been a neat journey. After Darin and I met, I had goals and dreams, of course, just like everybody in the music business does. We still talk about how we never imagined we’d get to do some of this stuff we’ve gotten to do. It’s been really cool to see those things become reality.

What are you looking forward to the most with this record coming out?

Darin: It’s been a few years since we put one out. I think we’ve grown a lot in those two years, and everything that’s followed, with what we’ve been doing, recording, trying to say as artists. We have grown maturely, too, in our music. And I think this record reflects that.

Brooke: I think that’s why we chose the title that we did, Inner Journey, because as kids, you imagine or dream about things that you can be when you grow up. And then, when you come into adulthood, you stop and think about where you came from, and what you’ve gotten to do, and if your heart really followed that path from a child to now. And I feel like ours definitely has. It’s been our inner journey. God has put us exactly where we needed to be at that exact moment.