eTown: Come for the Music, Stay for the Message 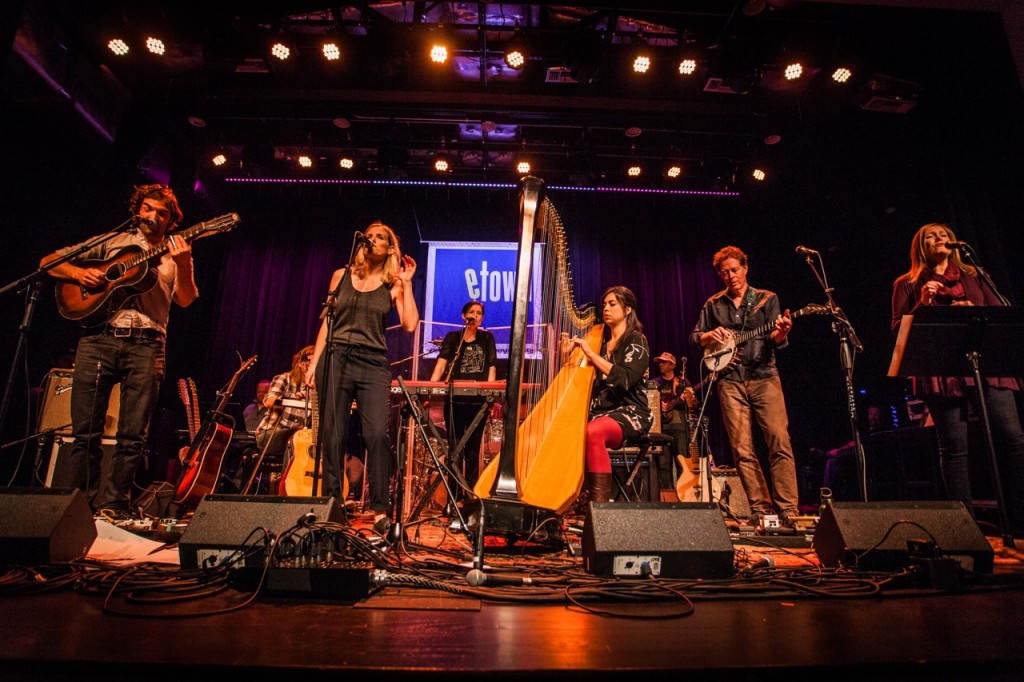 Wife/husband duo Helen and Nick Forster have experienced first-hand how music can facilitate a connection. Both performers, they met backstage at the Telluride Bluegrass Festival in Colorado 30 years ago. While Helen had served as the co-owner and co-producer of the festival from its inception, Nick was a founding member of the acclaimed bluegrass band Hot Rize, which was on the precipice of a long-term hiatus. The couple bonded over music and shared values — including a concern for the environment. In 1991, they launched eTown, a nationally syndicated, independent, nonprofit radio show integrating conversations with community organizers and researchers along with performances and Q&A sessions with musical guests.

“If you imagine what happens at a bluegrass festival, there’s something very fundamental, which is that everyone comes together from disparate backgrounds and walks of life and there’s no vetting of philosophy or political party or socio-economic alignment or anything like that,” Nick says. “They have a shared experience … [and] a common focus … their hearts are being opened by music, which is a very real and palpable and powerful thing … There is that sense of connectedness which means that, by Sunday night, as things are starting to wrap up and people are thinking about heading home and going back to their jobs the next day, going back to their normal concerns and cares, there’s a wistfulness. There’s a little bit of sadness about, ‘Man I was part of something this weekend.’ I think, to a large extent, a community that’s connected like that is also going to do a couple of other things, including looking out for each other. And they also tend to look out for their space … and so all of those things are a part of the DNA of eTown.”

The program’s tagline defines eTown as a place where people come for the music and stay for the message.

“We wanted to give people a place to go where the music brought people together, where everybody was welcome, where the music would be both the connection point and uplifting, but more importantly, we would also stimulate dialogue in conversation about how do we take better care of each other and the planet,” Nick explains.

eTown is recorded weekly in front of a live studio audience at eTown Hall, a 17,000-square-foot converted performance space in the middle of downtown Boulder, Colorado. Once a church, the building features state-of-the-art recording studios, production rooms, and camera and lighting equipment, allowing Nick and Helen to navigate the shifting media landscape. eTown films the performance portion of each show and posts the videos on their website. When deciding which musicians they will feature each week, Nick and Helen say diversity is key.

“We wanted to have musicians who were soulful. We didn’t necessarily want to have any from a particular style. I think we do tend to focus on vocal singers, you know. We don’t do as much instrumental music, for example, because I don’t think it really fits with our show as well as others,” Nick says. “We’ve always tried to feature one well-known act and one less well-known act, so that people can get excited about hearing the person they know, but then get more excited about the discovery piece … We try to mix it up further, so we have one band, one solo, maybe one male, one female, maybe one from one musical tradition and one from another, because at the end, everybody plays together for the finale and so we want to make sure that the finales are kind of like, ‘Wow that’s a weird combination.’ You’ve got a singer/songwriter and a hip-hop artist, or you’ve got a bluegrass musician and a blues guy, or you’ve got a Cajun band playing with a Latina band from Los Angeles or whatever it is.”

The other segments of the show address social and environmental issues — from homelessness and hunger to air pollution and compromising the oceans. But in 1991, eTown was ahead of the curve when it came to these discussions. Climate change and global warming weren’t even concepts at the forefront of public or political discourse.

“There was a lot of apathy at the time, and people are not apathetic because they’re bad people. It’s usually because things seem overwhelming and you don’t feel like you have any power to do anything,” Helen explains. “So we wanted to bring people in and give them some food for thought. We wanted to inform them and, most of all, we wanted them to be inspired to get involved. We wanted to bring our skills together in order to create something that was really welcoming across the board: Wherever you were, you’re in eTown.”

This idea led to the creation of the eChievement Award, which Helen gives to one winner each week, inviting them to speak about their work on the show. Nominated by other listeners, eChievement honorees are citizens who are actively trying to improve their communities. “We’ve tried to be solutions-oriented,” Nick says. “We’ve tried to highlight the problems but also think about things that are working and things that are positive in the age of Trump and those things are welcome. We hear from listeners that are like, ‘Thank God, there’s something positive out there in media.”

After 26 years, Nick and Helen believe eTown is just getting started.

“The reason for doing eTown, I think, is more important now than ever because we are entering into this time in our nation’s history where politics have become so divisive and so violent, frankly, and the idea that we need to come together particularly around some core issues that are relevant and important for all of us. I mean, it is absolutely critical that we find some common ground,” Nick says. “And we are more committed than ever to making sure that we can use music to bring people together — but not gloss over the details — and talk about what’s important and talk about what we can all do, each of us, to try to address these issues that are absolutely critical for our future. So I’m super pumped about both our history and our legacy, but especially about our future.”