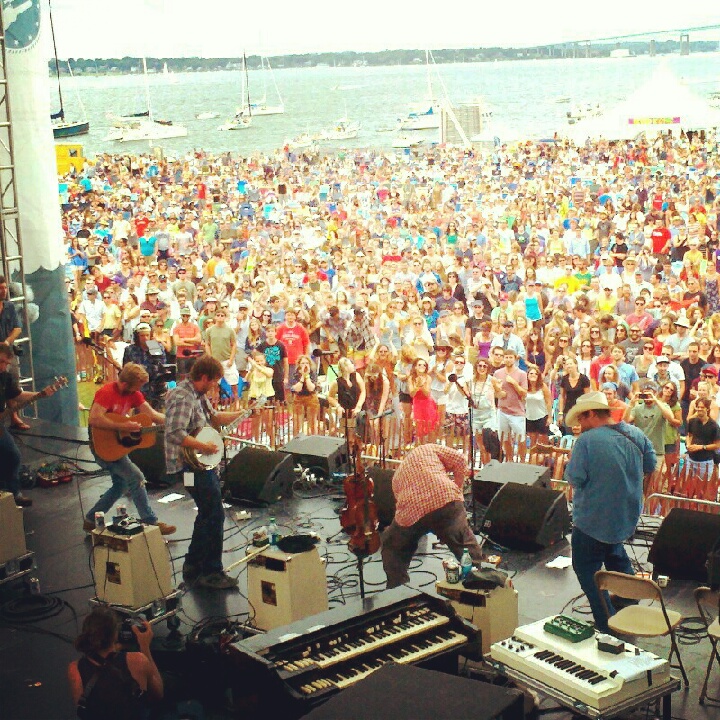 The 2012 Newport Folk Festival, in its 53rd year with arguably the nation’s best artist lineup of the summer, continued its long running streak of ushering underexposed talent onto the national stage. This was true for yesteryear artists like Joan Baez and Bob Dylan, and even artists in recent years, such as David Wax Museum and Brown Bird.

Just as we at grass clippings predicted, a new band to add to the list is Brooklyn secular gospel band Spirit Family Reunion, who has seen a recent explosion in the press (The Wall Street Journal and NPR to name a few) since it was named to the festival’s lineup. Like Baez and Dylan, the Festival marked the start of a new era in the band’s lives. Despite an early timeslot and frazzled late arrival to Fort Adams, the band turned a massive crowd (consisting of college hippies, Brooklyn hipsters, public radio music snobs and everything in between) into rabid fans. The crowd begged for multiple encores with standing ovations and passionate cheers within a set that comprised almost completely of original songs (besides a spicy rendition of “End of the Line,” a song from Woody Guthrie’s Columbia River Collection) and no special guests. It was especially moving for me personally, as I though back to a Saturday afternoon in 2009 when I stumbled upon the band playing at my neighborhood farmers market and selling hand-burned CDs.

But that was just a one way this year’s festival exceeded expectations. There really were too many magic moments to capture, but after a few Newport Storms (beer and weather), here’s what stood out…

SO much more happened on stage, but there was plenty that happened off the stage as well. A crowd gathered as Jonah Tolchin wandered the grounds, playing without shoes and singing traditional folk songs. Also, slightly offstage and as the rain began to pour down, Punch Brothers rewarded those that braved the storm for their main set, with a mini unplugged set in the crowd as the stage hands began to tear down. It was catching moments like those that makes this festival the unique, communal gathering that it is.

Check out our photos from grass clippings photog Richard Kluver or vote for the festival’s best tattoos here.

My band Della Mae has performed at Grey Fox Bluegrass for three years now. I feel like every musician has lots of favorite festivals, but there’s always ONE that each of us will connect with on a personal level. For me, that festival is Grey Fox. They have stellar headliners, but a lot of festivals do. The most special thing about this festivals is that they create a platform for unique collaborations. Focusing on the personalities and relationships of artists, Grey Fox promoters Mary Doub and Chuck Wentworth have created a festival with a magnetic vibe that starts with the artists and spreads to the audience–a crowd full of people who appreciate the music and know they’re about to see things they’ve never seen before.

Speaking of those things, the festival’s greatest decision was to host Rushad Eggleston–‘the original Snee Goblin’. Look him up, love him, and go where you can to see him (most definitely at Grey Fox nextyear). He was playing with one of my favorite new bands, The Old Tyme Kozmik trio, alongside Darol Anger and Bruce Molsky. Rushad also closed the dance tent stage on Saturday night with his band Tornado Rider. Aside from his musical genius, Rushad is an athlete. He climbed the speaker tower to take a solo, and performed while being physically carried by his backup singers (okay, full disclosure: Della Mae became stand-in backup singers for Tornado Rider that weekend).

Highlights from the eyes of Della Mae: Our main stage set was really fun — afterwards, we signed a guy’s banana suit. We set up a ‘tattooing station’ at our workshop stage and gave out free Della Mae temporary tattoos. Our dance tent stage was probably my favorite set of all-time. We were joined by Greg Liszt and Dominick Leslie from the Deadly Gentlemen, Aoife O’Donovan, Bryan Sutton, Rushad Eggleson (again!), and my brother Dennis Ludiker from the great up-and-coming band MilkDrive. Rushad climbed on Shelby’s bass to take a solo, and Aoife played drums on ‘No Diggity’. What a ridiculous night.

Grey Fox is a magical place where you can be watching Del McCoury, see David Grisman picking along backstage, head to the dance tent stage where Del and Jason Carter are sitting in with Red Knuckles & The Trailblazers (Celia got to sing a song with them as well, and the rest of the Della Mae ladies got to be backup dancers!!), only to head back to main stage where the Punch Brothers are melting faces off of an eager audience. To top it off, you wander back to your camp, only to find Bryan Sutton, Grant Gordy, and Courtney Hartman picking on their guitars. The best part? All this actually happened over the course of four hours.

Other notable sets/moments: Thile & Daves, Tribute to Scruggs & Doc hosted by Tim O’Brien, Jesse McReynolds playing songs of the Grateful Dead, Brittany Haas sitting in with Tony Trischka & Territory, Noam Pikelny & friends performing with Aoife O’Donovan, and all of the jams at the Bluegrass Bus in the campground (one of which lasted until 9am — no joke).

Buy your ticket early for next year. And get your tent ready for one of the best campgrounds (and true festival experiences) around.