Ghost, God, and Girls: Angaleena Presley Thanks the Indigo Girls for 30 Years 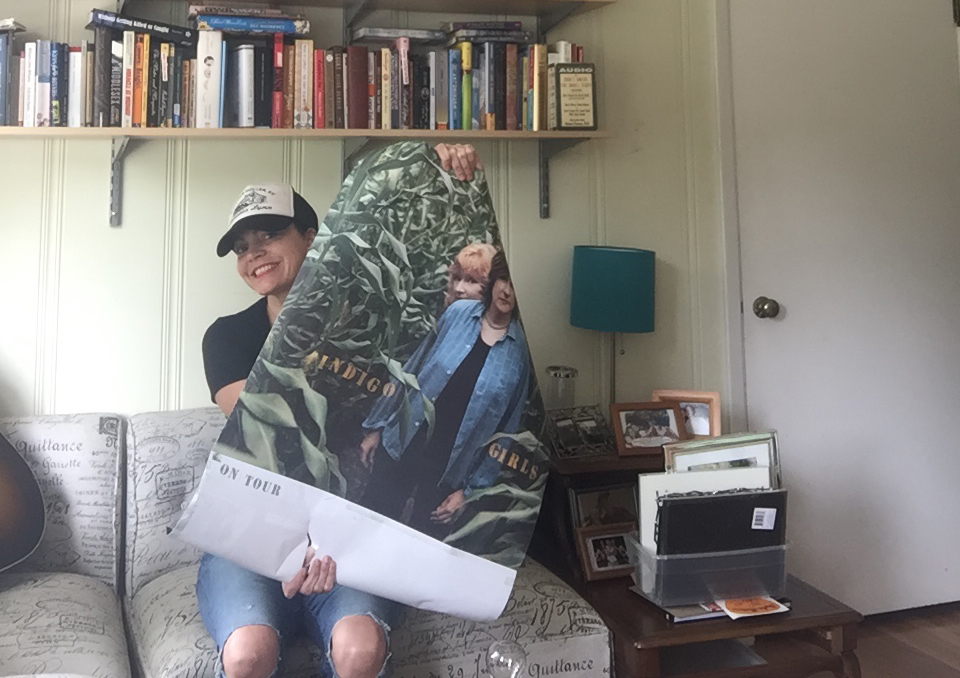 In lieu of having a full blown panic attack, I’m just going to tell the truth. So goes the story of my life. It’s Thursday, and I’m on my period. I’m sitting in the corner of my kitchen where I created a writing/reading nook. I’ve never read a book here, nor have I ever written anything here. I’m pretty sure I looked at pictures of reading nooks online all day and decided that I couldn’t be taken seriously as a writer if I didn’t have one. After five years, I’m taking her on her maiden voyage. My legs are propped up on a thrift store coffee table and my stomach is cramping like the dickens. For months, I’ve been toiling over a promise I made to Kelly McCartney and the reckoning is upon me. We were standing backstage at an Amy Ray show when she mentioned she was organizing an Indigo Girls tribute. Before the words spilled fully out of her mouth, I screamed with the glee of a school girl, “I want to do ‘Ghost’!!!”

Damn Emily Sailers and her Asus7 Bm C# diminished minor chord finger-picking wizardry. Damn her haunting yet calming melodies that melt like butter on the ear. Damn Amy Ray’s gravely, heart-stopping tone and her unmatched, unhinged low harmonies. Damn them both for writing and recording complex, profound songs that are hellishly hard to cover. Jesus Christ, what have I gotten myself into?

I was introduced to these two bitches in the back seat of a 1992 Mustang LX. A few friends and I had scraped up enough money for a road trip, and we were heading to New Orleans where the legal drinking age was still 18. Jackie was the girl that every girl needed on such an adventure. She was a no nonsense, straight-talking teenager who could read a map, keep up with a purse, and pass for a 20-something. Her taste in music was indelible. Without knowing that it would change the course of my life, she popped in [Indigo Girls’] Rites of Passage and began to sing along. By the end of the journey, I not only knew every word on this album, but I had come to really, finally know God.

I always believed in God. When I was a kid, God was a robed man with a beard and a bow staff. I said my prayers every night — not to feel closer to him, but rather, to feel less afraid. He was a man who, on more than one occasion, wrecked his own masterful creation with flood and famine. He was a man who turned a woman into a pillar of salt for merely looking in the direction of sin. I remember one particular Sunday school lesson that was based on the Prophesies of Nostrodamus. I was only 8. Upon dismissal, my teacher said, “See y’all next Sunday … maybe.” He was convinced that the world was going to end, and I left that day believing the same. I slept at the foot of my mom and dad’s bed all week and waited for this all powerful, cantankerous, controlling man to rain down fire and vanquish the earth. I wondered if I had accidentally taken the mark of the beast. I had a real thing for Cracker Jack tattoos and thought maybe I had licked and rubbed one too many times. My sister and brother were babies, and I looked around my house and yard for places to hide them. I didn’t want them to burn.

The Bible Belt put many a whelp on my little mountain soul, but that day, in that car, on that Southern stretch of highway, that sound penetrated my indoctrinated notions and those wounds began to heal. Mortality, brutality, unrequited love, forbidden love, reincarnation, gravity, chicken men, ego, the dream-sucking underbelly of commercial Nashville, paper tigers, truth, justice, Jonas and Ezekial … the weight of it burst into my heart like a live wire on a downed power line, electrocuting my sheltered ideals, shocking me harder than any Nazarene horror story ever had. My murderous image of the man upstairs died in that car in the blinding light of this record and, boy, was I glad. That dude was scary. 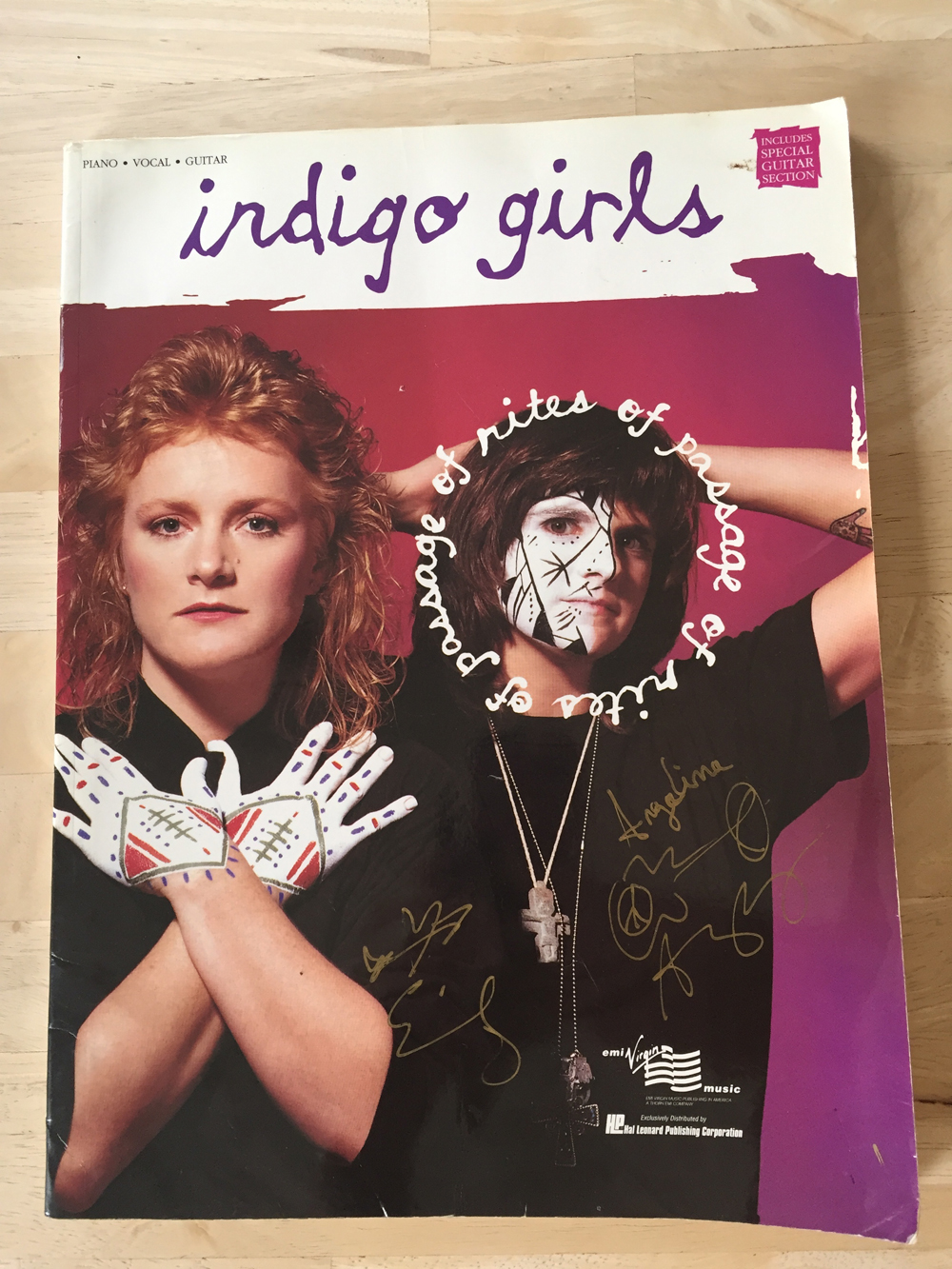 In the years to come, I would listen to and study every nuance of Rites of Passage, as though I had stumbled upon some heavenly relic. I bought the official tablature book from my college record store. I used it to try and learn to play “Ghost” and, in the process, accidentally taught myself to finger-pick. I hung a giant poster of Emily and Amy above my bed in my dorm room. I waxed poetic about ideas they introduced me to and I sang a novice version of “Closer to Fine” around bonfires. I saved up and bought tickets to see them play at the EKU Alumni Coliseum. My boyfriend at the time was a student/artist liaison. Right before the show started, he came to my seat desperately searching for a safety pin because one of the girls was having a wardrobe malfunction. I happened to have one on the overalls I was wearing. They were so worn out that one of the buttons had fallen off the bib. A safety pin was literally holding one side of them onto my body. Without a second thought, I gave him the pin and watched the show half-naked so that an Indigo Girl didn’t have to be. My boyfriend got them to sign my tab book and I nearly died. Twenty years later, I would find myself writing a song with Emily, secretly starstruck and in awe of how she effortlessly played those damned major seventh and diminished minor chords that my collegiate fingers could not master.

And that brings me full circle. When I squealed, “I want to do ‘Ghost’!!!” what I meant was, “Hey, I learned to play the intro and first two verses of ‘Ghost’ in college and, although there’s no way I could possibly learn the whole thing and actually pull it off on some stage, the sheer excitement of being a part of an Indigo Girls tribute has seemingly hijacked my common sense. Moreover, the adrenaline that I feel pulsating through my veins is tricking me into believing that I surely could learn that song and perform it in front of an audience.” Well Kelly, I am, in fact, a charlatan. I am an Indigo Girls super-fan who follows in their footsteps yet dares not to try and fill their shoes. They mean the world to me because they helped me define my place in it.

I know lots of Indigo Girls records by heart but Rites of Passage literally introduced me to my spirit. I honestly didn’t know I had one. The God I know now is a tender, forgiving, infinite source of light and energy that is available to every living, breathing thing. Not something to fear, but something to lean into and trust. My friend Jackie has since passed away, and I can’t help but think about her being on the other side, having all the answers, having exposed me to the very thing that challenged me to ask the hard questions about religion, love, life, and past lives. I’m grateful for having known Jackie. I’m grateful for road trips and Southern women who sing about whatever the hell they want. I’m grateful to God for blessing this earth with music and I’m grateful that Kelly McCartney has the patience of Job. In honor of full transparency, I’ve wiggled out of about six deadlines and changed my mind 100 times about what I was going do to pay homage to two people for which my gratitude is beyond measure. It’s definitely beyond some butchered rendition of a song as beautiful and articulate as “Ghost.” So, this is my offering … a psychotic fan rant brought to you from the confines of a professional songwriter’s virgin reading nook.

Amy and Emily, thank you so very much for opening doors, for raging against the machine, for vamping harmonies that give goosebumps, for being brave beyond words, and for spouting philosophy with twang enough for a little girl in Kentucky to understand that she doesn’t have to be afraid anymore. I love you both. Now, I have to go change my tampon and down a bunch of ibuprofen before I decide to delete all of this and try to sculpt some shit or something.