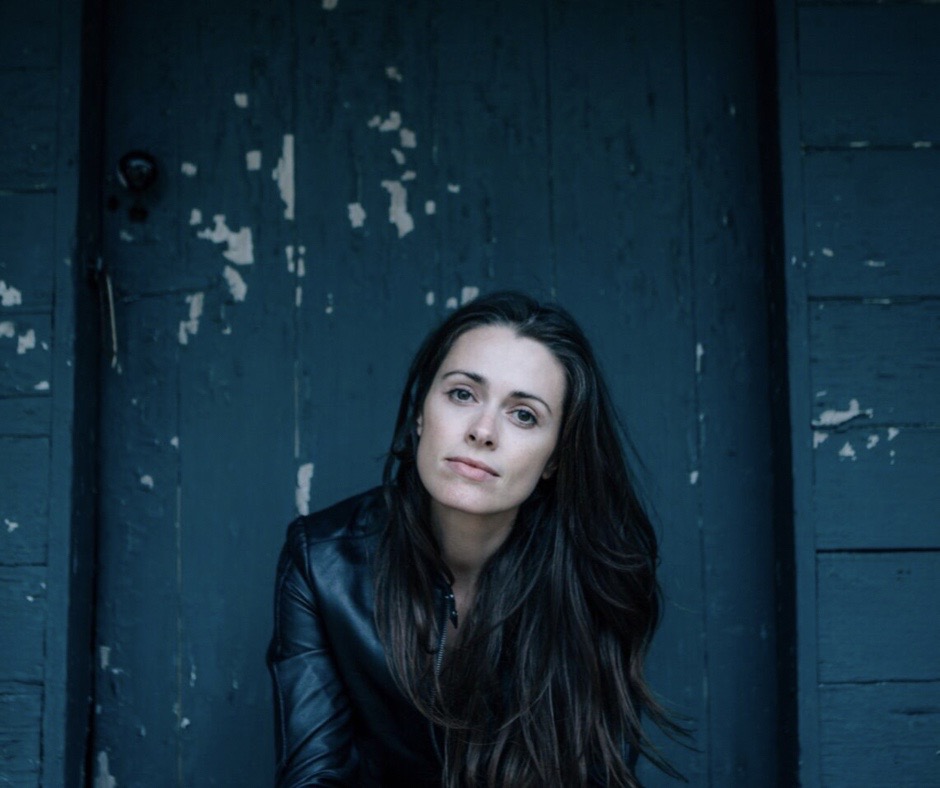 With me today in the Writers’ Rooms at the Hutton … Caitlin Canty.

You have a new record, Motel Bouquet.

We’ve hung out, but I’ve never actually gotten to interview you, so I have some questions.

It’s such a dreamy record. The first time I listened to it was a snow day, and it was perfect … although listening to it on an allegedly spring day also works. But the pedal steel, the strings, the banjo, this web of dreaminess under your dreamy voice and your lovely songs. Let me ask, though, did you have trouble finding a decent banjo player? [Laughs] Because I know those are in short supply.

[Laughs] I started working on Noam with these … we played a couple shows together, and he and I had written two songs that are on this record. I’ve never worked with a producer I’d written with. He had already brought his ideas, when we’d played as a duo, he’d brought his thoughts to the table. So we went into the studio one day with some folks to catch one song, and we got three others that day, and it was so much fun and it felt so good that we booked two more days. That’s how this came together.

Because it came together really quickly.

Well, I mean the recording!

When I walked through the studio doors on that first day, everything since then has felt easy and fun and right and natural, like I won the lottery. The people I played with on the record … for people who aren’t scrolling through my press release right now … Stuart Duncan played fiddle, Jerry Roe played drums, Russ Paul played pedal steel, Noam played electric guitar, Paul Kowert played upright bass. That was the core band, and me and my Recording King. We were at Josh Grange’s studio in town, and it felt so good. We also got some backing vocals from my favorite singer on the planet, Aoife O’Donovan. Gabe Witcher also played some fiddle while they were on tour with Noam, weeks after we cut this. So the core thing was live in the room.

And with that limited time, you have to have the best of the best, and everyone has to walk in ready to go. The songs have to be solid — you can’t be sitting in the corner finishing the chorus.

No, we had charts and had thought through the arrangements. The folks who were coming to the table, they are those musicians who can turn on a dime and they are folks who have their own sound, their own ideas. What really struck me about this recording, more than a lot of situations I’ve been in was, when you have people with such strong personalities, but there’s no ego involved. That’s a really interesting balance, and I feel really lucky to have that — when people can bring their own thing, but also be supportive of the song and can put the voice in front. They have an idea of what they want to bring, but not step on the toes of another person.

They’re still there to serve the song.

It’s amazing. It was so fun. I wish it took 100 days to record! [Laughs] But the pre-roll, the reason I was rolling my eyes about it only taking three days was, before took so long! Constant editing and writing new stuff.

So you guys mapped it out pretty tightly going in, knowing that you were gonna be limited.

Yeah, and some of these songs I’d played.

You’d road tested them for a while.

Yes, and some were brand new — I’d never played them with anyone before. It was a good mix of the tried and true that had never found their sound, their place yet on an EP or the band hadn’t hit that sweet spot yet. It was just … I wish you could have been there!

I wasn’t invited, Caitlin, or I would’ve stopped by! [Laughs] What’s interesting to me, in listening to it, because I’m still somebody who listens to a record all the way through, a whole piece.

And there are a lot of different things going on style-wise, but it’s still very cohesive as a piece. What do you think’s the magic there, the glue? It’s not just your voice.

Certainly not that. I think it’s the programming of this as only a handful of days means that you’re in the same mindset, you’re in the same time and place. You have the same people involved so they can see what we’re doing. It’s not like you just walk into a scenario and you leave it and hear about it three years later. They were the band.

Or you weren’t jumping around to different studios with different players, something like that.

I think the glue is when people can share that moment together. I almost feel like, when you’re in a van on tour, there’s an overlapping of our thoughts, in a way. Once you start eating together and hanging with each other, there’s just something that happens.