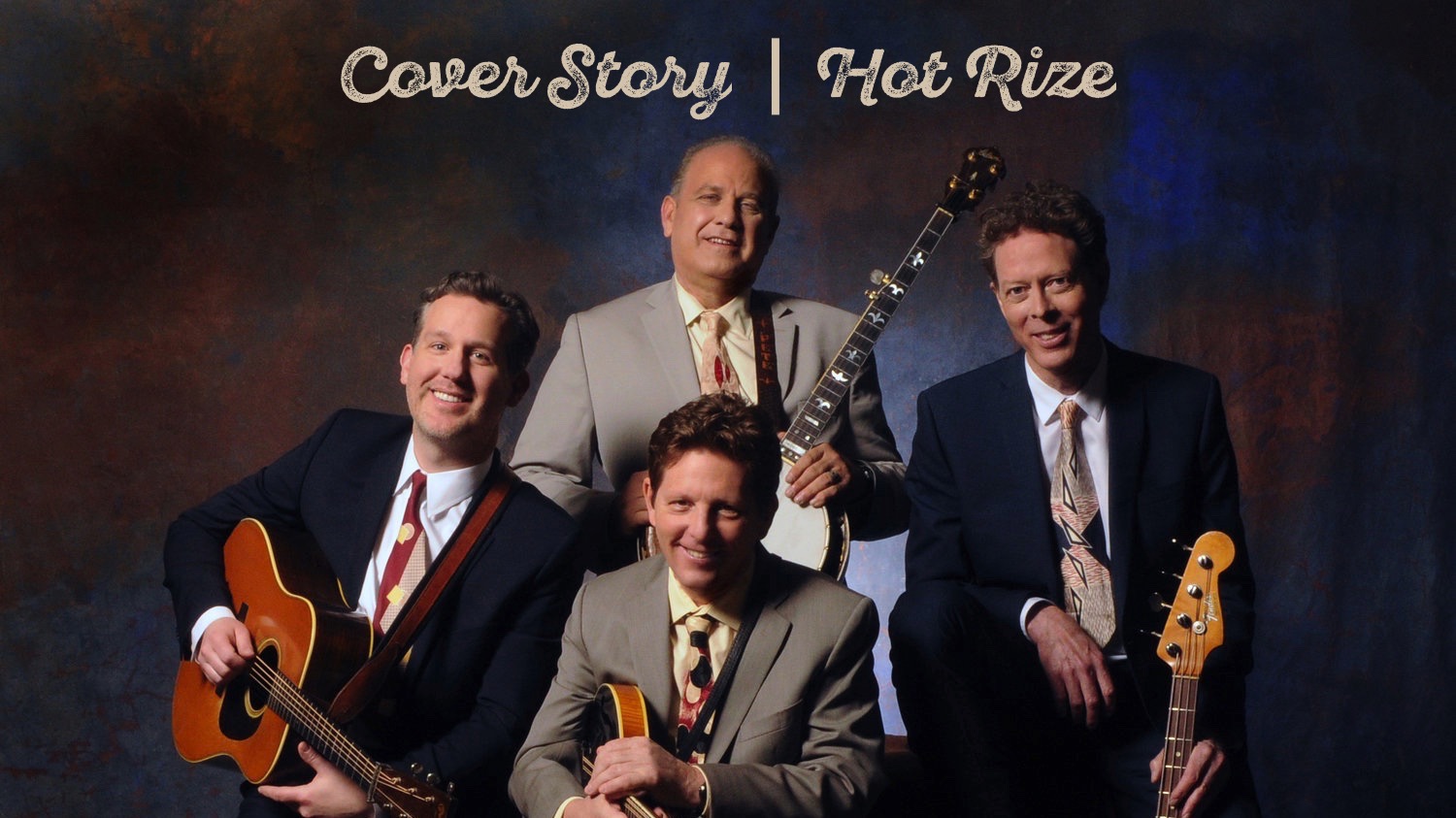 He’s had 40 years to think about it, but it took Nick Forster a while to get to a real answer to some existential questions about Hot Rize, the bluegrass-rooted band he, mandolinist-singer Tim O’Brien, banjo wizard Pete Wernick and guitar master Charles Sawtelle formed in in Denver in early 1978. Just what is it that made Hot Rize, well, Hot Rize? And just what is it that make the band — which will host the 29th annual International Bluegrass Music Association Awards on Sept. 27 in Raleigh, North Carolina — still treasured, still distinctive, lo these two score years later?

Forster paused at the question, and then hemmed and hawed a bit before giving it a try. First he tried to break it down to the talents and sensibilities they each brought to the mix. Then he tackled the way they all interacted — the natural combo of O’Brien’s and Wernick’s instrumental skills, O’Brien’s voice, the instinctive guitar skills of Sawtelle (and later of Bryan Sutton, who stepped in when Sawtelle died of cancer in 1999). And then he looked at the balance of celebrating traditions and exploring new paths with choices of material. Blah blah blah. Whatever.

Finally, almost sheepishly, he mentioned one other thing: “Also maybe, I don’t know if it came through sonically, but we were having fun!” he offered. “We were pretty young and had a sense of humor and were having fun!”

Well, there we have it. For fans, for anyone who’s heard the band, there’s no “maybe” about it. From the very first gigs through the three-night anniversary celebration at the Boulder Theater in January with guests Sam Bush, Stuart Duncan and Jerry Douglas — commemorated on the new 40th Anniversary Bash album, recorded in January at the Boulder Theater — it’s that ineffable spirit that stands out, even if we can’t really identify it any better than Forster did.

But let’s let O’Brien have a stab at it as well.

“I don’t want to compare to Bob Marley or anything,” O’Brien says, risking those dangerous waters anyway. “But he was trying to make country music and rock ’n’ roll, and that’s what came out. He had his thing and place and time and what he did. We were too hippiefied and too Western or something to play it like the guys from the Southeast, I guess. We were a Boulder band, a college town band. But we were also a reaction to the Newgrass movement. We adjusted the steering a bit. That was a little too far to the left of us. So we went to the center, but we were still a good deal left of center. … So I don’t know,” he concludes. “It was a weird recipe that seemed to work.”

Not that they followed any recipe, let alone a long-term game plan.

“We thought we’d just play for the summer,” says O’Brien, pulling one right out of the Famous Last Words file.

That was the view from their first gig, in Denver, on May 1, 1978, growing out of jam sessions at the Denver Folklore Center, where they all had found jobs. From the very start there was something different, distinctive about them — the first song the four of them remember playing together was not bluegrass at all, but “Wichita Lineman.” Just two weeks after the May Day gig they were up in Minneapolis booked to play on a new public radio show called Prairie Home Companion, and a month after that they were on the bill of the Telluride Bluegrass Festival. And without even thinking about it, they found themselves in a full-time proposition.

“The fact that we didn’t have a long commitment meant we would just be a band for as long as we had gigs,” Forster says, noting that Wernick, a.k.a. Dr. Banjo, served as de facto booking agent as well as band member. “So we kept saying, ‘Yes.’ Pete would say, ‘Do you want to play this wedding? This party? This club?’ ‘Yes!’ We had a goal of trying to make $100 a week take-home pay each. That was a lot of pressure on Pete.”

It was quite the time. Forster and O’Brien were in their mid-20s, Wernick and Sawtelle in their early 30s, all having found their way to Colorado from various points on the compass, meeting through working at the Denver Folklore Center. Fairly quickly, jam sessions grew into something more solid. Forster was recruited to play electric bass (which packed into a car trunk more easily than an acoustic bass), though it was an instrument he’d never played before. As soon as they hit the road they found themselves in the middle of some amazing settings.

“It was an incredible time to be in a bluegrass band, in my view,” Forster says, a time when many of the founding fathers of the form were still going strong, while a new generation — the “newgrass” crowd — was searching for fresh ways to expand the bluegrass lexicon. “I don’t know that we’re fully the third generation of bluegrass, but maybe two-and-a-half. So if we played festivals in the late ‘70s, and because there weren’t as many bands then, a lot of times you’d play the whole weekend, Friday, Saturday and Sunday, two shows a day. So Bill Monroe and Ralph Stanley and Jim & Jesse, and [such younger bands as] Seldom Scene and Hot Rize would do two sets a day.”

That was just a part of the vibrant world in which they found themselves.

“Between the sets, you’d sit at your merch table and there’s Bill Monroe sitting at the merch table, and Jim & Jesse, and you’re at someone’s farm in Oklahoma or Georgia, so lots of personal hang time with everyone.”

They didn’t exactly become pals with the old-timers, but a community quickly formed among the younger musicians, particularly after Hot Rize became a client of booking agent Keith Case, whose roster included Newgrass Revival (featuring Sam Bush), John Hartford, autoharp magician Bryan Bowers and Norman and Nancy Blake. Case took advantage of any opportunity to have two or more of those acts sharing bills as much as he could.

“That was so incredible,” Forster says, “to be part of this rolling band of gypsies. Almost every other weekend you’d run into one or even three or four of them.”

Gig by gig it kept going, and kept getting bigger, abetted by their association with their, uh, friends, Western swing ensemble Red Knuckles & the Trailblazers. (“Oh yeah,” Forster sighs. “Those guys.”) By 1990 it had gotten so big that Hot Rize was named Entertainer of the Year in the very first IBMA Awards. But it had also gotten so big that O’Brien and Forster in particular found themselves reassessing things.

“Three things happened concurrently,” Forster says. “We achieved so many of our original goals, frankly. We got to make records, got a bus, got to play the Opry and Austin City Limits, could play any festival. Spectacular. I don’t mean to sound ungrateful, but we felt a little like, ‘Okay, we’ve done this. This is the end of a chapter.’ Pete and Charles, being older than Tim and me, said, ‘You guys, you don’t understand! This is the brass ring! We hit the jackpot! We’re a band and we can play together and it’s going to get better.’ And we being in our mid-30s rather than mid-40s thought, ‘That’s cool, but we’re going to do other things.’”

And so Hot Rize went into “rest mode,” as Forster puts it. O’Brien, who had established himself as an in-demand songwriter, signed a solo deal with RCA and recruited Forster, who had gone on tour with Sam Bush and John Cowan, to join his band. In the course of that, Forster came up with the idea for a radio show combining roots music and discussion of environmental sustainability, about as Colorado a concept as you could find. That show, eTown, launched in 1991, with its demands ultimately being too much for him to stay on the road with O’Brien.

Meanwhile, Wernick started Live Five (sometimes known as Flexigrass) with some Klezmer-meets-Dixieland approaches, while Sawtelle worked with Peter Rowan and opened a studio, taking on production gigs. There were many calls for reunions, and now and then they would get together for one-offs or a few gigs. When Sawtelle was diagnosed with cancer in 1996 there was a feeling that they needed to do something bigger and took on a full tour, resulting in a live album. After Sawtelle died in 1999 there were occasional shows with several guitarists stepping in, including Peter Rowan a few times. Then Sutton came on board as a full-time member in 2002, though “full-time” was still fairly sporadic, peaking with a 2014 album, When I’m Free, and the first real tour since the sorta-hiatus.

And then they saw that 40th anniversary looming and it was too big to overlook.

“The approach was frankly just celebratory,” Forster says of the concerts. “This is a milestone and it should not go unnoticed. So let’s just do something fun and have a party.”