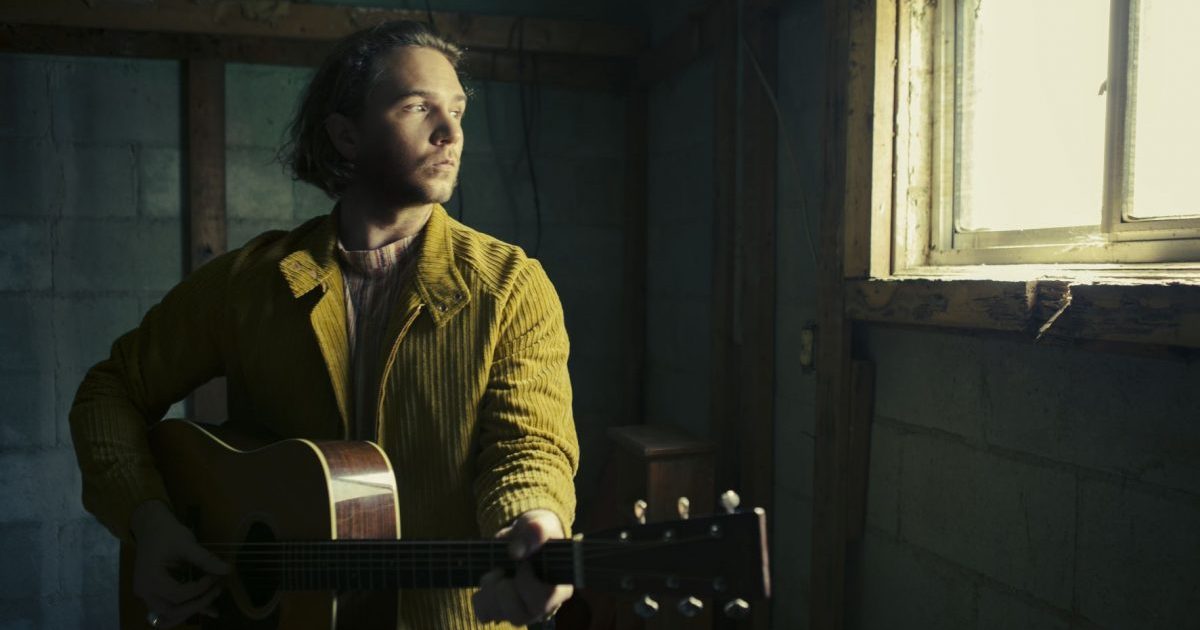 Kentucky musician Ian Noe is a writer of experience and an experienced writer. An appreciation for the people, places, and moods in his hometown of Beattyville – first introduced with striking emotional depth on Noe’s 2019 debut, Between the Country – remains a narrative cornerstone on River Fools and Mountain Saints. Yet this new collection reveals more self-assuredness around his artistic decisions.

Not limiting himself to the acoustic folk framework leaned upon for Between the Country, Noe (pronounced “NOH”) and producer Andrija Tokic broadened the scope of which instruments would best support Noe’s stories this time around. One of the most notable shifts in tonal prominence comes via the electric guitar. Heard in the latter halves of songs like “Burning Down the Prairie” and “P.O.W. Blues,” the electric guitar is more than just present. It holds a central role, giving Noe’s songwriting a sonic swagger and a heavier musical temperament. Additional coloration and emotional influence atypical of his rootsy musicality comes by way of a French horn solo and the surprising flash of reverse-phased piano heard on “One More Night.”

All this being said, for Noe, the foundation for a song doesn’t start with an instrument, or even a memorable personal story. Instead, his songwriting fire often ignites with a hook and a particular set of chords. While the stories shared on River Fools and Mountain Saints present an intriguing peek into the human condition, what gives this album its most unexpected and fascinating layer of substance is Noe’s approach to composition and production. It’s one thing to verbally recount a directly lived or socially common experience. It’s another matter entirely to determine the path a melody takes – or how that melody ought to be transformed in size, space, dynamics, or sonic shape – based on the pursuit of reflecting one’s own perceptions of an experience.

The very sounds and sonic character of River Fools and Mountain Saints were chosen in such a way that they too can serve as a window into how Noe sees the world, giving the album a whole new autobiographical quality.

BGS: What kind of awareness did you have of bluegrass when you were young and getting into music? What do you remember about the impression that style made on you at the time?

Noe: I got my bluegrass fix from my grandma. I took a lot of road trips with her and it was Ralph Stanley. It was Bill Monroe. It was mainly those two. But she was a huge Ralph Stanley fan. I’d say it definitely made up a good 40 percent of what I was hearing when I was first coming up. I mean, the first thing that made me want to really play was Chuck Berry, specifically “Johnny B. Goode” – it’s the first song I ever learned how to play. Hank Williams’ “I Saw the Light” was number two, and with “The Wildwood Flower” I learned how to pick.

I was on that for a long, long time, until I got into John Prine. You want to talk about a song that has definitely been captured by the bluegrass world, it’s definitely his song “Paradise,” which has an amazing bluegrass feel to it. So I’d say after I figured out that I wasn’t going to be able to play like Chuck Berry, which was my first big letdown around the age of 6 or 7 – my fingers just wasn’t big enough to play that those famous leads, those famous licks … that’s when I started getting into Bob Dylan’s Bringing It All Back Home, which was the first album I ever bought and I ever owned. I just started getting really into people who could write their own songs and move me in that way.

Much of River Fools and Mountain Saints conveys its stories through character narratives. How did you create and subsequently shape the characters in these songs?

With each song, I was really trying to make it so when you took any one of these songs off this album and set it aside, that it could stand on its own. I definitely use “river” and “mountain” a lot on this whole thing, obviously. But I did want to make it to where they stood alone. Some of the songs just came, and some of them I had to work on for a second. But the very first thing that I had was the album title itself, before I even had a song like “River Fool” or “Mountain Saint.” That was a blessing because if I can get a good title, then I can see something in it, you know? I can see a vision in it, to where I’m able to put it together.

And I like character songs anyways. I found it pretty fun to work on. It was fun to work on a song like “Ballad of a Retired Man.” And as much as I wanted to make the characters of each song stand alone, I did the same thing with the music. “P.O.W. Blues” is a lot different from “River Fool” or “Ballad of a Retired Man.” So, I didn’t concern myself too much with, “Well, is this going to be too rockin’ to go with ‘River Fool’?” I just wanted to make sure that each song stood alone.

That’s quite the fine line to walk. On one hand, any track can thrive on its own, but they fit together so seamlessly that you have this cohesive flow, both narratively and musically.

Yeah, and you might have just a short little melody – not even a bridge, not a chorus, nothing – and you remember that. It’s not always easy. I mean, this album originally wasn’t even gonna be called River Fools and Mountain Saints. I had a whole completely different album recorded and shelved – it just wasn’t doing it for me. It wasn’t any of these songs; it was a whole bunch of different stuff. But this title just came to me and I was like, “That’s good enough to stick on the front of the cover. So, I think I can do something.” And that’s the little formula that I’ve made up. Even if nobody else gets it, and even if it’s not a real thing, it helps me finish the [music].

How did you and/or Andrija Tokic discern some of the production decisions to reflect your vision of life in Kentucky?

It’s whatever I thought those characters or those places sounded like. … A song like “River Fool” is gonna sound like that because that’s what somebody sitting around a river sounds like to me. If I had to guess what that sounded like, that’s what it would be. The real openness of a song like “Ballad of a Retired Man” leaves you enough space to when you produce it like that, that you can really feel something about it, and the lyrics connect with that type of production because you want it to have air to breathe. And especially in a song like that where the lyrics suit that mood.

The music is just however I think it’s supposed to sound and that’s just how I’m going to do it. Like, even though the little drone-ness of a song like “Appalachia Haze” – that’s, to me, what a rainy day in Kentucky sounds like. That’s the way I hear it. So that’s why I produced it that way.

On “’The Road May Flood,” I was trying to capture a sound like when you see old cars, like maybe mid ‘70s, at a grocery store. Pictures of those older days – especially in Eastern Kentucky or any place like that. That’s what I thought something like that would sound like. I just take the picture of whatever the song is, and I have to look at the picture, and I think, “What does that sound like?” I try to get as close to that as I can. Luckily, I enjoy sound effects. I didn’t get to use as many on this album as I did on Between the Country but sound effects are important. Like in the beginning of “Strip Job Blues,” you hear that truck going. I always knew that song was going to be closer to a bluegrass style – the same with “River Fool.” I stick the character in my head and I have to figure out what he, or she, or they sound like.

What would you say makes the spirit of Kentucky unique from other rural, community-driven places in the U.S.?

I’m not so sure if it is as unique as what you might think as far as lived experience, you know? I can only speak for me growing up there, and loving growing up in Eastern Kentucky, and just honestly always having a life full of music and loving where you grow up and come from, and the people you live around. It’s not that hard to write about when it’s like that. But I’m not so sure that wouldn’t be that different from any other rural place.

As you were talking about being transported to somewhere you’ve never been, I felt the exact same way the first time I heard Neil Young sing “Helpless.” “There’s a town in North Ontario …” I’ve never been to North Ontario. Still haven’t. But it sounded like someplace that I was familiar with and he made you feel like you do. So, it was important for me to get a feeling like that, specifically out of the song “River Fool,” which I’m pretty sure is my favorite song on this album.

But you know, struggles are struggles. They really are, no matter where you’re at. I just try to put the happiness and the bad times in the literal geography of where I’m from, which is the mountains. That’s kind of how I think about it. Let’s take these day-to-day lives, and the stuff that you know, and let’s stick it around all this geography and let’s weave all this stuff together because it goes hand in hand as far as I’m concerned.