In a Time of Fear, We Banjo 3 Make a Brave Statement on ‘Open the Road’ 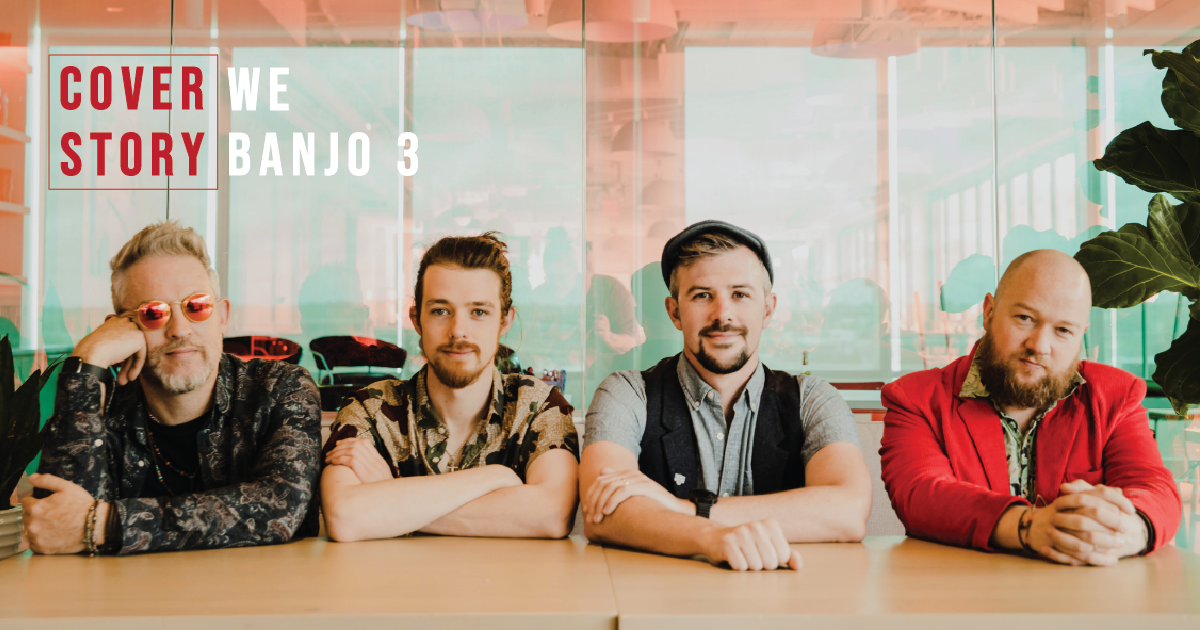 Walking through life, people learn, grow, and develop their own identities, and eventually find others who become figures in their chosen family. In a lot of ways, a band is a kind of chosen family. However, what if one’s chosen musical family is also their family of origin? Folk music in particular, being tied to so much oral and performative tradition within families, is plenty familiar with this dynamic. Still, it’s hard not to be intrigued by the overlapping bonds of band and brotherhood that shape We Banjo 3. This duality only sparks further curiosity knowing the two pairs of brothers –– David Howley, Martin Howley, Enda Scahill, and Fergal Scahill –– are celebrating 10 years together, with the Galway band’s new album, Open the Road, marking the occasion.

Several songs on Open the Road germinated from very specific ideas –– like the conceptual substance of Hans Rosling’s Factfulness prompting “Rialto” or a literal group writing exercise leading to a whole character profile for the young bird in “Long Way Down.” At the same time, a lot of unspoken dynamics infuse the music with memorable and individualized character. On the latter track, the casual camaraderie among the band is likely what gives the dense layers of background vocals their warmth and feeling of positivity.

We Banjo 3’s album encompasses all of the creative knowledge and musical proficiency that the four gentlemen have accrued over the last decade. However, and perhaps even more meaningful than those qualities, Open the Road also sheds light on the many kinds of interpersonal relationships that are forged and strengthened in a band –– particularly a band anchored by family ties. It’s these almost indescribable instincts and insights that make their music stand out.

For our BGS Cover Story this month, we caught up with Martin Howley by Zoom.

Howley: We started out with [myself, Enda Scahill, and David Howley,] exploring the sounds that the Irish tenor banjo could make, and being very interested in using the banjo as sort of a nexus for being able to cross over and understand bluegrass music and old-time music. It was pretty much an exploration of old-time American music, bluegrass music, and Irish music and where they enmeshed. We were mining that rich vein of culture throughout those three musical genres and finding old songs and trying to find new corners in them that we could explore. And that was the genesis of the band.

If I look towards now, 10 years of poring over that material and celebrating it and then having these lovely interactions where we tour around the world and meet people, and they’re having these conversations musically with us each night, you end up with these deep connections that are ephemeral and they inform how we feel about the music that we’re playing, and that informs new music that we create. And over time, we started to write more in our own voice, all the while coming from this arc of exploration of these other older cultures and having had this really lucky and serendipitous journey where people have supported us and grew alongside us.

I’d say that’s the biggest change: [We Banjo 3] has gone from being maybe like a retrospective, looking at the music that had gone before and trying to celebrate it in new ways, to now having the focus firmly on the future and how we bring the past and its beauty with us into the future.

What are some ways the band’s literal brotherhood enhances the improvisatory and energy-driven nature of We Banjo 3’s music, in ways it might not if the family ties weren’t there?

We grew up 30, 40 minutes apart but with very similar upbringings, in terms of the exposure to the music that we encountered. And obviously, trad music here in Ireland is very strong. It’s got a very strong community scene. That was a big part of our social upbringing. Each set of brothers experienced that. We had this arc where we all played together casually in different ensembles in our hometown of Galway. Part of our semi-professional basis of music was just playing for tour groups that came through –– international tourists and locals –– just lots of celebration of Irish music in its various guises. And we had this rich timeline, probably before the band ever started, with 10-plus years of playing together in Vegas.

The four of us have a loose markup, a loose structural beginning to most of our pieces. Particularly the instrumental pieces, they have a very textural, overarching philosophy and a loose structural arrangement of where it’s going. And then inside of that we paint collectively, and it’s not like there’s a dominant lead and everyone else follows. It’s because we’re two sets of brothers and I think that’s where we’re different: Traditionally in jazz and different improvisational structures, you tend to have a dominant lead, or at least a lead that’s moving through time, and then other people following that direction. That’s very much commonplace in improvisation. We’re unusual because the four of us almost speak with one shared language, and there’s this collective brain power of almost a brotherly intuition of knowing where the direction is going, so we can very democratically play together on stage. And the music has been improvised in real time, collectively, and we all just trust that we know where each other is going and we can back that up and follow that and amplify it. That’s not something any of us have experienced outside of playing in these contexts.

A big part of We Banjo 3’s identity revolves around blending traditional Irish folk music and the rootsy folk music of the U.S. That said, how would you describe the way the banjo, with its distinct sonic qualities and complex history as an instrument, is perceived and received in music scenes around Ireland?

There’s evidence that the banjo was in Irish music as early as the 1900s. The Flanagan brothers in New York –– they’re one of the first Irish recording artists that featured banjo and accordion and they played incredibly virtuosic stuff. There are wax cylinder recordings of banjo in Irish music. But I think the four-string tenor banjo coming into force and becoming a real common part of the Irish traditional music would have started in the 1960s. And through youth groups like the Dubliners, you really saw the banjo become a part of the tradition. It fits in really well because Irish music has this innate rhythmic punchiness that is part of being for dancing. And the banjo really can act as you’d like it to –– it can jump subdivisions really well and in a melodic sense, it has all these bright overtones that caught on really well. And so that blends with the more legato instruments, like fiddle, and accordion and flute.

Songs like “Long Way Down” and “Garden Song,” seem crafted using an almost academic mode of thinking. How much was trying these songwriting approaches about wanting to shake things up rather than waiting for creative lightning to strike?

We all write individually and bring kernels of ideas to the band as they might apply to the band –– themes that might fit in with a loose collection of thoughts. David wrote “Garden Song” on Instagram live, with the kernel of that idea, rolling with 200 people all helping him write lyrics. I think he might have created a rough form and then started throwing lyrics together. That came to the band and we started to refine it: rewrite some things, change some things, and build arrangements around it. That’s eventually what “Garden Song” is now.

And in the case of like, “Long Way Down,” that was actually a very interesting process because that was a group write. We basically sat down with a whiteboard and went, “Let’s try writing a song together today as a creative exercise,” and we never really thought that it would end up on an album –– just more like something to do together, because the four of us were in a room. Like, “This is sort of interesting, let’s do this.”

Whereas if you look at something like “Rialto,” that song was more like a personal journey that was almost entirely written in a 10- or 15-minute sitting. That was informed more by the divisive news cycle, experiencing that as an immigrant, and thinking about being a white immigrant or a white, male immigrant and the sort of differences of perception that other people experience. It was connected back to that. It was very much written from the emotive base of “In this particular time, this is what I’m experiencing,” and writing ideas like, spitfire away, down on a sheet. Then it just came together and became a song. There’s a variety of writing processes, from one extreme to the other.

What do you see as the element that binds these songs together to make a unified statement? And what is that statement?

I think the album attempts to be brave. For us, it’s a statement of artistic exploration in a time of intense fear –– collectively for us in the music industry, and also individually. … We wish it to be very egalitarian and for it to feel like a humble but brave statement of intent towards growth collectively. And on the widest scale, that it would attempt to ask, how do we build our societies? Are there things we do as individuals in the collective that we could do better in a way to incorporate more people, and for more people to live more authentic experiences for themselves?

With all the stuff that’s happened in recent days with Supreme Court rulings and such, more than ever, we feel like our mission as artists and musicians is to be really cognizant of the oppressed or those who have a less visible or audible voice and to try and create art that brings us all together and connects us in a really humanistic and holistic way.