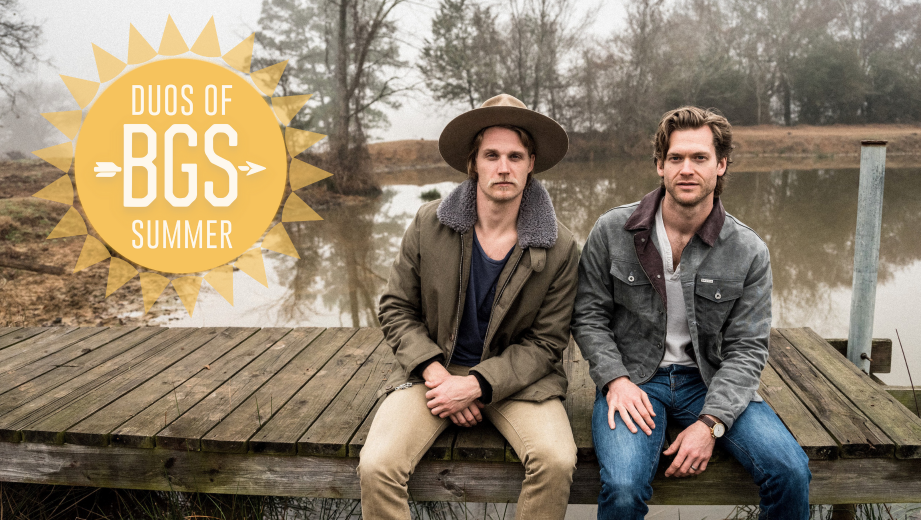 There are more trees than people in San Isabel, Colorado, where the Wet Mountains poke the sky and Jamestown Revival’s Zach Chance and Jonathan Clay set up a makeshift recording studio in a cabin. The Texas natives emerged with San Isabel, a gorgeous new album that marks both a return to Jamestown Revival’s acoustic roots and a bold step forward into more topical lyricism.

While addressing the unease now shaping the country’s collective mindset is a first for the pair, the record maintains Zach and Jonathan’s anchors of empathy and hope – along with their now-signature Southern folk harmonies that are woven together with that unexplainable richness usually reserved for families.

With a day off from touring, Jamestown Revival called in for a conversation with the Bluegrass Situation.

BGS: Location seems important to you guys. Take your album titles, for example. Utah was your first, and now, with San Isabel, you’ve returned to an album title that documents where you recorded. You’re not from or living in Utah or Colorado, but you sought them out. Why?

Jonathan Clay: Colorado is a place we’ve always loved. Long story short, we had access to a summer cabin in Colorado, and we thought, Gosh, we should take advantage of this.

Zach Chance: It’s kind of twofold. It was access to those places and trying to record in a guerrilla fashion. We enjoy the adventure of it — going and setting up in these settings, being removed — it just makes for a really fun process for us.

JC: For us, the city is not really conducive to creativity. It’s just not where I feel compelled to create.

ZC: The city has its own flavor of inspiration. It does inspire us at times, but it’s not really where we like to record, so…

JC: We have a habit of getting out into the woods when we’re ready to make an album.

Why did you guys decide to return to a more acoustic sound this time around, compared to The Education of a Wandering Man?

ZC: We weren’t touring as much as we had been the past couple of years. We’d been writing for some other things, and we just really wanted to go back to two voices – to write songs that could work with one guitar and two voices, back to the roots of what we were doing. I don’t know if it was all the noise of the time we live in right now, but we wanted something more centered around traditional folk storytelling. We were listening to a lot of Bob Dylan, Crosby, Stills, Nash, & Young – stuff like that. We felt compelled to live in that world.

Do you have favorite songs on the new record?

ZC: I don’t know. As soon as we start talking about them, I’ll tell you all the reasons I love them. Maybe I’m too diplomatic. I love “Harder Way” and “Who Hung the Moon.” That was a song we wrote in Colorado and recorded in a day. They’re like children. We love them all equally but differently. This might sound really dumb [Laughs], but there have been times playing “Crazy World” that I get kind of choked up. I start thinking about everything, and I get a little sad. The first few times we played it out, I got really emotional. We want to write stuff that ages like we’re aging — that matures a little bit.

JC: I think that’s a good point. We want our art to grow with us and mature with and without our listeners. I really like “Who Hung the Moon.” “Harder Way” is a pretty special song. I’m actually pulling my three-year-old boy on the scooter right now, humming melodies that I don’t know. It’s a special thing. When I sing the line about my boy, it’s coming from a real place. I have to hold back emotions sometimes because I think, I’ve got an audience to perform to. I can’t get choked up because that makes it hard to sing. 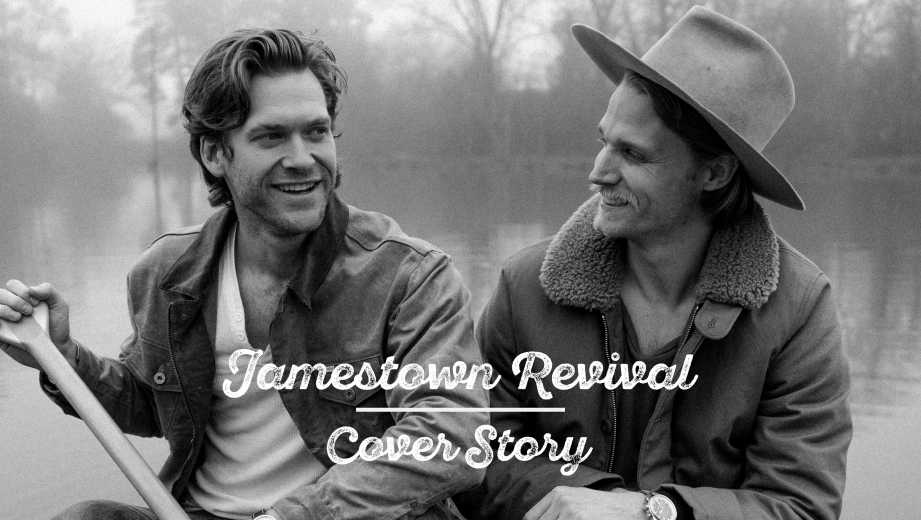 It seems like more and more artists feel obligated to address the uneasiness in the country right now. San Isabel does it – not necessarily explicitly, but it is still more topical than your previous work. Did you feel obligated to do that?

JC: I don’t think it was out of obligation more than it was just compulsion. We just felt compelled. It’s on everybody’s mind –everybody’s consciousness. As an artist, I think your consciousness manifests in your songs. That’s what happened with us.

First, you take a beat to acknowledge the despair a lot of folks are feeling in “Crazy World.”

JC: Zach and I have always been careful not to speak from some place of moral high ground. We don’t want to be just one more person preaching to somebody, as if we’ve got all the answers, because I think the problems plaguing our country are very complicated. If you oversimplify them and place blame, you’re falling victim to the very thing you’re proclaiming to rally against.

In a lot of our songs, we just point out what we see. It’s almost a lament rather than a judgment. We’re all in this together. All of our countrymen and women, we created this – we all played a hand in it. We’re trying to point out our observations and underscore the fact that we’re all on the same team, when you really get down to it. We all do care about each other. I feel like we’ve got more in common than we realize sometimes. It seems like sometimes the world is wrapped up in greed and malice and angst and vitriol rather than peace and — not to sound cheesy, but — harmonious things, the things that really give us happiness.

ZC: Yeah, it’s funny. “Crazy World (Judgment Day)” and “This Too Shall Pass” are back to back on the album. And those are like two sides of the same coin, you know? “Crazy World” is the day you wake up and think, I have zero hope for humanity. The idea was you’re sitting in a bar, and you’ve had a few to drink. Stuff is coming across the news, and you’re just discussing the state of affairs, like, “Yeah, man. It’s still a crazy world. Not much has changed.”

I love that you just brought up that it’s like those two songs are two sides of the same coin because it does feel like “This Too Shall Pass” offers some comfort.

ZC: Yeah, as dark as I can get, I recognize that I’m probably a glass is half full person. John, I think you are too.

ZC: [Laughs] So, that song speaks to that. No matter how dismal it is, we have to find a silver lining. Friendships and family are where the true joys in your life come from, more often than not.

What’s the best thing you’ve encountered or experienced back on the road this time?

ZC: Oh gosh, I have so many good ones. Eating dumplings in New York in this little shop in Chinatown. We crammed in with all our people, sat with strangers, and the beers were flowing. Those nights are fun. The camaraderie of being on tour again: You’re just living together, and you come home with a million new inside jokes and phrases.

JC: One thing that was really cool about this tour is we brought somebody out in our crew as a roadie who had never been out of Texas. We saw the world through his eyes. His parents brought him here from Mexico when he was six years old. He hasn’t had the opportunity to do much traveling. I met him and thought he seemed like a cool dude, so we gave him a job as a roadie.

ZC: We’re all a bit more advanced in age and have made a few more laps around the country, so in some ways, you can be jaded by that. But he’s 21, and experiencing all these things for the first time. It was really fun to relive some of this stuff through his eyes.

On this album, it feels like you have found your sound, at least for now. Comparisons to Simon & Garfunkel are inevitable, but ultimately, you don’t sound like anyone else out there right now.

JC: Well that’s a huge compliment. I appreciate that.

ZC: We definitely look up to Simon & Garfunkel and the Everly Brothers and would gladly take a comparison, but humbly say those guys are masters. We’re trying to figure it out.

JC: Yeah, those guys are masters, but we want to be masters. Somebody’s got to carry the torch. I’m not saying that in a cocky way, but I would love to be somebody that attempts to carry the torch. It’s what we love to do, and it’s what we love to sing. Singing without harmony — I don’t enjoy it half as much. When I sing with Zach, my voice feels complete. So it’s almost like a musical necessity for us.

If it were just the harmonies, the comparisons to Simon & Garfunkel would still come, but it’s your writing too, which is so strong.

JC: A lot of people still ask, “Are y’all brothers? The way y’all harmonize, I feel like you have to have grown up with each other.” Well, we’re not brothers, but we have been singing together since we were 15 years old, so I guess that’s about as close as you can get without being blood-related. It’s like a vocal marriage.

As far as the writing goes, we try to be thoughtful and not say things in a way that’s been said before. We knew early on that we wanted to be the kind of writers who are not overly esoteric or hard to understand. We wanted to speak in a way that’s plain and understandable but at the same time, maybe put in a way that you haven’t quite heard it put before.