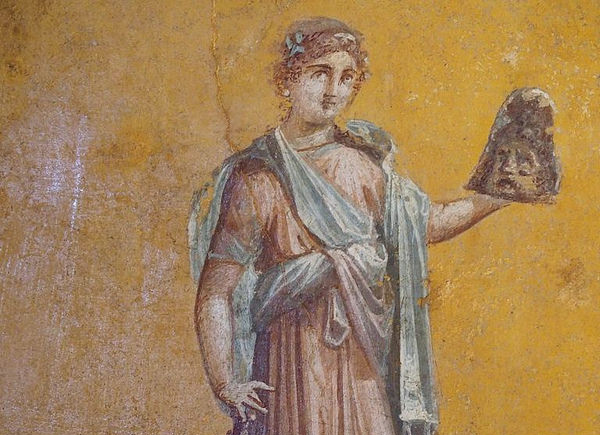 Atlanta, GA — After being ignored for a solid 12 hours while singer/songwriter Jeremy Andrews scrambled to make last-minute gift and dinner arrangements for his girlfriend on Valentine’s Day, Greek goddess and muse Melpomene vowed to get her revenge.

“I can’t believe he didn’t invite me to dinner,” she huffed. “Who is the one who whispers ideas into his ear all night? Do you think he’d be able to distill the triumphs and tragedies of the human condition into neat little rhyming couplets on his own? Pfft, gimme a break.”

Melpomene cast a stink eye across the restaurant at Andrews’ loyal and loving girlfriend, Allison Stone. “Ugh, look at her. He’s not even thinking about music right now. What — it’s okay to forget about me on the most romantic day of the year? I’m a goddess! I have long, glorious locks and preside over all arts and sciences! This is bullshit.”

Andrews was enjoying the last bite of his tri-colored beet salad and reached across the table to caress Stone’s hand when a melody popped into his head. As he started humming and tapping his foot, his girlfriend’s face fell.

“Let me jot this down real quick so I don’t forget it,” he said apologetically. “It’s the catchiest tune I’ve come up with in years.” Stone nodded and reached for her phone, knowing she would have time to watch an episode of Girls while he got the idea down. She didn’t even look up when he held up the just-a-sec finger to the waiter while singing multiple variations of the same line into the voice memos app on his phone.

Melpomene and Andrews worked on the song well into the dessert course before the goddess was satisfied and left. Stone had polished off the bottle of wine and was texting her mom with one eye open asking her to help remember this night if she ever thought of dating another musician.

With the goddess’s feelings still hurt from never receiving an official dinner invitation, Melpomene complained to her father about the snub, when she returned to the clouds. The couple drove home from the meal in silence only to find that a large branch had been struck by lightning and fallen directly onto Stone’s car. Sighing and near tears, Stone trudged to bed to be up for work the next morning while Andrews stayed up perfecting the bridge until dawn.